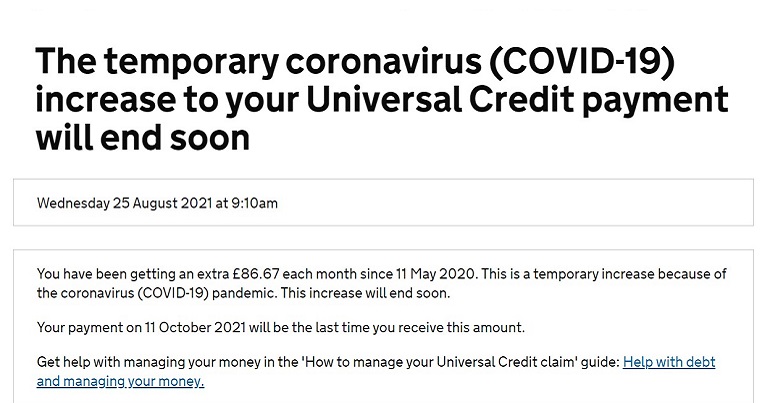 The Department for Work and Pensions (DWP) is starting to send out official notices to claimants about its Universal Credit cut. Meanwhile, Labour not only has refused to say if it would keep the £20 a week reduction, it is failing to recognise that this is a system that’s broken beyond repair.

As The Canary previously reported, in April 2020 the DWP increased the rate of Universal Credit by £20 a week in response to the coronavirus (Covid 19) pandemic. But chancellor Rishi Sunak and the DWP have only put the increase in place until September 2021. From the 6 October, the Tories will cut £20 a week from Universal Credit claimants.

Half a million more people are set to be pulled into poverty, including 200,000 children.

But so far, the DWP has refused to budge.

The DWP cut is coming

Now, people are starting to get notices in their online Universal Credit accounts like these: 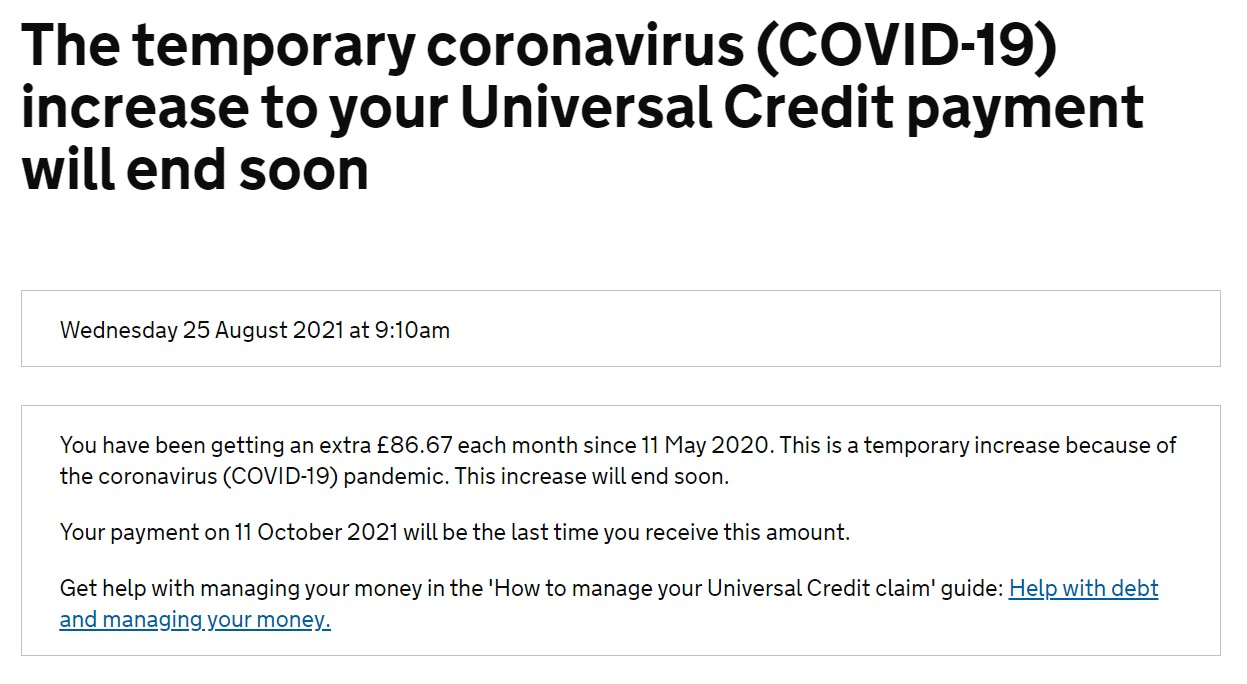 Amid all this chaos, the Labour Party is doing little more than hand wringing.

As SKWAWKBOX reported, shadow DWP secretary Jonathan Reynolds recently spoke about Universal Credit. He told the Mirror that Labour has a plan for the social security payment. Ideas included rebranding it and, as the Mirror wrote reducing:

the ‘taper rate’, which currently takes away 63p of Universal Credit from a claimant for every £1 they earn in a job.

But crucially, as SKWAWKBOX wrote, Reynolds:

He told the Mirror that:

Our opposition at the minute has to be around the cut that is scheduled for October because that’s the here and now, that’s the influence Parliament can have.

I think it’s time MPs made a decision on whether that should proceed.

The overall level of any benefit I can only set out before an election… I can’t give a specific commitment on that at this stage.

But I can promise we’re going to fight with everything we’ve got to stop the government making that cut in October.

That will mean very little to the millions of people being hit by the Tories’ cut.

Moreover, while Reynolds is spending time thinking what new name he can give the benefit, he is missing a fundamental point. Universal Credit cannot simply be rebranded or reformed. As The Canary previously wrote:

Its [Tory] architects designed it to marginalise whole sections of society; to create a dystopian world where an underclass of people exists on its fringes.

It might seem to some observers that the department of work and pensions has been tasked with designing a digital and sanitised version of the 19th-century workhouse, made infamous by Charles Dickens.

Labour’s limp proposals will do nothing to address this. Meanwhile, hundreds of thousands of people are left waiting to be plunged into further poverty.