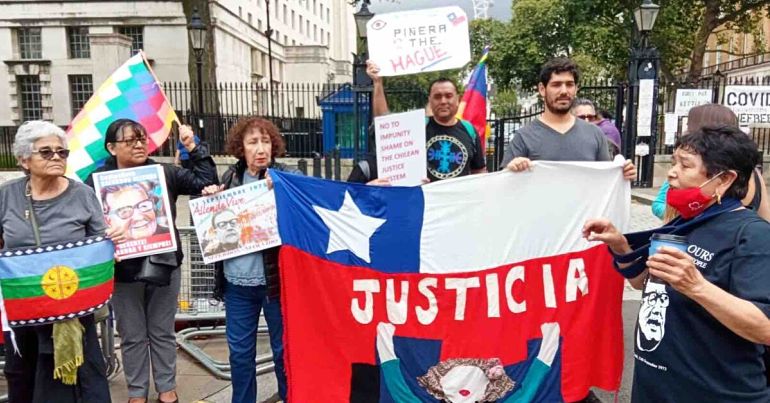 This article was originally published in Alborada, an independent media organisation that focusses on Latin America.

On 10 September 2021, British Prime Minister Boris Johnson welcomed Chilean President Sebastián Piñera to 10 Downing Street, his official residence in central London. Piñera’s arrival in the UK marked the final instalment of a relatively secretive European tour, during which the embattled president called on the Vatican, Paris, Madrid, and Rome. Official confirmation of Piñera’s visit was released late on 9 September, likely to thwart mobilisations against his administration’s appalling human rights record. Protesters nonetheless gathered outside of Johnson’s residence, with Chileans and others loudly condemning Piñera, a right-wing oligarch and millionaire, for his brutal crackdown of nationwide protests over the past two years. Given the British state has been a key supplier of arms aiding repression in Chile, it seems unlikely that Johnson attempted to broach the issue of human rights.

After cancelling his original trip to Europe in June, Piñera stepped off his private plane in London late on Thursday evening to little pomp and ceremony. 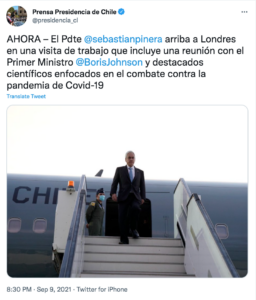 According to official accounts, Johnson and Piñera‘s discussions on Friday morning focussed on the climate crisis, the Coronavirus pandemic, and political issues in Latin America. With recent electoral victories for the Left in Bolivia, Peru, and Argentina, Piñera represents an important UK ally within a region that seems once again to be drifting from the foreign policy prescriptions of the imperialist states. To this end, the UK government has remained largely silent in the face of massive human rights abuses in Chile beginning in late 2019.

In October 2019, Chile became the site of a student mobilisation which rapidly transformed into a mass uprising against the rising cost of everyday life – a symptom of a process of neoliberal economic restructuring initiated under the dictatorship of Augusto Pinochet that came to power following a US- and UK-sponsored coup against the socialist government of Salvador Alllende. Piñera’s government responded to the mass protests – which, by late October, were attracting over one million people onto the streets of Santiago – with brutal violence.

During the first month, the death toll rose to 20, with 473 others injured. Many more have since been killed, injured, and sexually abused by the Chilean police, such that Piñera has been referred to the International Criminal Court. A particular aspect of the official repression in Chile was the targeting of protesters’ eyes with rubber bullets. During the first two weeks of protests, the Chilean police fired 104,000 cartridges, with 126 people being struck in the eye. Though they fired 43,000 in November, 214 protesters were struck in the eye – suggesting the Chilean police had adopted a deliberate and cynical policy of shoot-to-blind. Eyepatches became emblematic of resistance.

Though British military assistance to repressive state security apparatuses across Latin America remains an issue of critical importance, it is largely ignored across the UK media. This trend remains true of Chile.

In March 2020, Byline Times reported that:

Chile remains one of the UK’s core markets for arms sales and the Government has continued to sell millions of pounds in arms and crowd-control equipment to the country. The Department for International Trade has said that the sales would not take place if there was evidence of internal repression, despite the UN stating three months ago that international human rights norms had been violated by both police and army personnel. […]

Of the £164 million worth of arms licensed to Chile since 2008, 50% have been in the last 12 month. While not all have been related to equipment that would be used by security forces, an Open Individual Export Licence was issued on 12 June 2018, which allows a company to sell “smoke canisters”, “smoke/pyrotechnic ammunition”, “tear gas/riot control agents”, “training CS hands grenades” and “training tear gas/irritant ammunition”.

Though UK military assistance should not be sent to states which may use it for internal repression, government officials have consistently refused to remove export licenses to Chile.

In July 2020, SNP MP Owen Thompson asked the Foreign and Commonwealth Office ‘which non-government organisations [the] Department has worked with in order to determine whether the granting of crowd control equipment and ammunition to Chile would result in those exports being used for internal repression’. In September that year, Foreign Office official Wendy Morton responded that the government ‘takes its export control responsibilities seriously and continue to monitor developments in Chile closely’, though did not disclose whether export licences would thus be discontinued.

In December 2020, Foreign Secretary Dominic Raab responded to an official letter regarding the ‘excessive use of force by members of the Chilean national police force, the Carabineros, and abuse of protestors being held in detention’. The Foreign Secretary, who has presided over destabilisation efforts and the training of repressive forces across the region, affirmed that ‘our embassy in Santiago has been in regular contact with the Chilean Government to raise concerns about allegations of human rights violations’ – but did not commit to ending British support for repression in Chile. According to the Department for International Trade’s Strategic Export Controls report for 1 January 2020 – 31 December 2020, moreover, export licenses for British military equipment to Chile are still being approved, though it is unclear whether these items are being used for internal repression.

In response to Piñera’s visit, Mariela Kohon of the Trades Union Congress (TUC), which represents 5.5 million workers in England and Wales, addressed protesters:

We call on the British government to condemn the brutal actions of Piñera and his government which, in the words of Amnesty International, has “misused the law to criminalise protesters” and engaged in “multiple instances of excessive use of force” leaving hundreds of innocent people blinded and maimed.

Britain’s trade unionists have a long and proud history of solidarity with the people of Chile, welcoming political prisoners who arrived during the dictatorship, and of non-collaboration with the regimes who repress workers’ and human rights, exemplified by the Scottish workers who refused to work on parts for the Chilean air force during the Pinochet regime.

Piñera’s visit to London comes at a significant time – namely, the 48th anniversary of the Chilean coup against Salvador Allende. Though the CIA’s role in the coup is well known, the UK government’s efforts to prevent Allende from ascending to the presidency are not.

The IRD also shared intelligence about left-wing activity in the country with the US government. British officials in Santiago assisted a CIA-funded media organisation which was part of extensive US covert action to overthrow Allende, culminating in the 1973 coup.

To widespread criticism, the Edward Heath (1970-1974) rushed to recognise the incoming junta, with UK ambassador to Chile, Reginald Secondé, privately remarking that the repressive military regime would be widely accommodating to British commercial interests. Meanwhile, UK officials sought to sanitise the incoming regime by cultivating critical journalists and monitoring the BBC’s reporting on the human rights situation under the dictatorship. Once Margaret Thatcher became Prime Minister, moreover, the UK proceeded to mislead ‘the public and MPs about its dealing with the Pinochet regime in Chile while it tortured and killed thousands of people’, as historian Grace Livingstone revealed in Declassified UK.

It is thus significant that, almost half a century after the Chilean coup, the UK government should welcome another Chilean President widely condemned for massive human rights abuses and the closure of democratic spaces. Then as now, UK foreign policy in Latin America is not based on respect for human rights or the promotion of democracy. Instead, Latin America is viewed as a resource-rich region of geostrategic importance, wherein outbreaks of popular democracy and wealth distribution are to be met with violent repression. Chile is no exception.