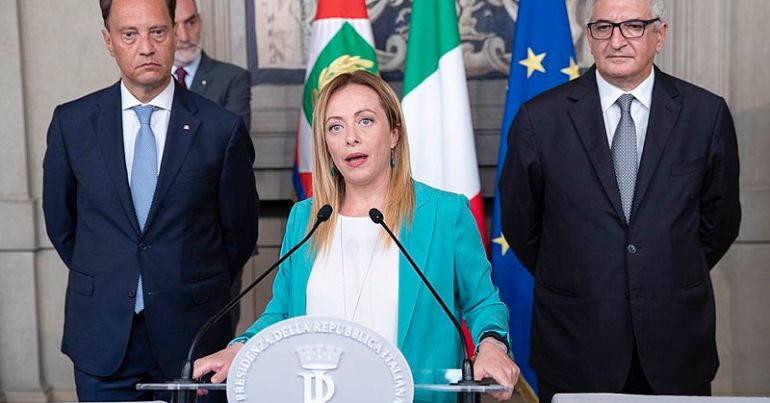 The election of far-right candidate Giorgia Meloni as Italy’s new president signals another advance of fascism in Europe. Her Brothers of Italy party has gone into coalition with other right-wing parties. It is likely migrants, workers, and LGBTQIA+ people who will face a vicious assault in the coming days.

The response of several prominent world leaders was, as one might expect, embarrassing. And some notable media outlets went the same way.

The Times framed Meloni, regarded by some as an inheritor of Mussolini’s legacy, as a ‘trail blazer’ in the mould of Margaret Thatcher and Angela Merkel:

She follows a trail blazed by powerful women who shaped the continent’s politics, beginning with Margaret Thatcher in 1979 and Angela Merkel, who stepped down as German chancellor in December after 16 years in office https://t.co/pBd2WwTGYK

Politico took a similar line, portraying Meloni as a plucky young activist in a man’s world:

More garbage normalization of fascism, this time clearly on the media instead of just their right-wing guests.

Do not allow them to normalize fascism.

Major political figures in the UK and US also fluffed their interpretation of Meloni, chief among them our very own Liz Truss:

Congratulations to @GiorgiaMeloni on her party's success in the Italian elections.

From supporting Ukraine to addressing global economic challenges, the UK and Italy are close allies. 🇬🇧🇮🇹

Hillary praising neofascist Meloni: “The election of the first woman prime minister in a country always represents a break with the past, and that is certainly a good thing,” https://t.co/9y0POHaq5x

But a ‘girlboss’ conservative Maloni is certainly not, even if you foolishly take Thatcher as one. Meloni’s politics are those of an altogether different and more extreme political right. In one interview which has surfaced, a young Meloni relates her worldviews – including praise for fascist leader Benito Mussolini:

As Jacobin‘s David Broder wrote for the Guardian, Meloni’s party, the Brothers of Italy:

…is rooted in the Movimento Sociale Italiano (MSI), a neo-fascist party created in 1946 which ran in elections but retained a deep hostility toward the republic created at the end of the anti-fascist resistance.

As far as policies go, Broder wrote that he expected Meloni’s coalition government to lean into:

attacks on immigrants, “LGBT lobbies”, trade unions and other groups they call the “left-wing establishment”. The call for a “naval blockade” in the Mediterranean seeks to harshen the existing EU border regime. The right-wing parties also plan vast tax cuts and the abandonment of jobseeker benefits.

While in a speech in Spain earlier in 2022, Meloni said:

Yes to the natural family, no to the LGBT lobby, yes to sexual identity, no to gender ideology… no to Islamist violence, yes to secure borders, no to mass migration… no to big international finance… no to the bureaucrats of Brussels!

Her party’s favoured slogan, it is worth pointing out, echoes fascist slogans of the past:

Fascism on the rise

Italy’s further fall into fascism is just the latest. Fascist and hard-right governments are in power across Europe from Hungary to the UK. Meloni is in government as part of a coalition, but the danger remains.

Whether the likes of Truss and Clinton have misread Meloni’s politics out of ignorance is unclear. But for those of us with a serious interest in opposing fascism, it’s worth remembering that it is never to be debated or tolerated – only smashed.