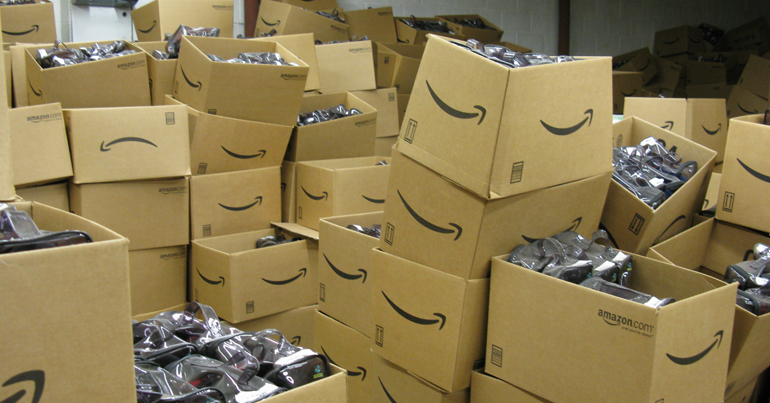 Amazon has been profiting from racist, anti-semitic, and Islamophobic products and “delivering hate to the world” according to a new report [pdf]. The report, authored by the Action Center on Race & the Economy (ACRE) and the Partnership for Working Families, discovered numerous examples [pdf, p21-30] of Nazi and alt-right-themed products, Kindle books, and music on the storefront. According to ACRE:

A close examination of Amazon’s various platforms and services reveals that for growing racist, Islamophobic, and anti-Semitic movements, the breadth of Amazon’s business combined with its weak and inadequately enforced policies provides a number of channels through which hate groups can generate revenue, propagate their ideas, and grow their movements.

Items that promote white supremacy and other racist ideologies are in direct violation of Amazon’s policies. The storefront’s Offensive and Controversial materials page prohibits the sale of:

Products that promote or glorify hatred, violence, racial, sexual or religious intolerance or promote organizations with such views

According to ACRE, despite this, offensive items are still being sold [pdf, p5-6] on the platform. ACRE puts this down to [pdf, p7] “a combination of weak and poorly enforced policies”. The group also says [pdf, p6]:

Amazon has been reactive, not proactive, in its response to use of its site by peddlers of hate. Amazon has a history of responding slowly—or not at all—to public pressure on this front rather than effectively preventing hate groups from using its platforms in the first place.

According to the report, items for sale [pdf, p21-30] on the Amazon storefront include Nazi-themed paraphernalia like swastika jewellery, ‘Totenkopf‘ decorations, and cross-burning baby onesies. The group also discovered Pepe-themed alt-right clothing and bags, and numerous other hate-promoting products designed for children.

The report found that hate groups are making use of Amazon’s digital book and music publishing services to spread their ideologies. It points out [pdf, p14] that Amazon makes money directly from products sold using the company’s digital services:

Hate groups and racist propagandists are also using Amazon’s e-book, self-publishing, and web services businesses to spread their ideologies and grow their movements. In these cases, Amazon is not just a retailer of products created by others, but it actually facilitates the publication or delivery of racist, Islamophobic, and anti-Semitic content, and in doing so generates revenue for itself.

“Amazon must take a public stand”

Third-party sellers who use our Marketplace service must follow our guidelines, and those who don’t are subject to swift action, including potential removal of their account.

Since the report went live, Amazon appears to have removed some of the highlighted items. At the time of writing, some items with hateful imagery are still for sale on the UK site.