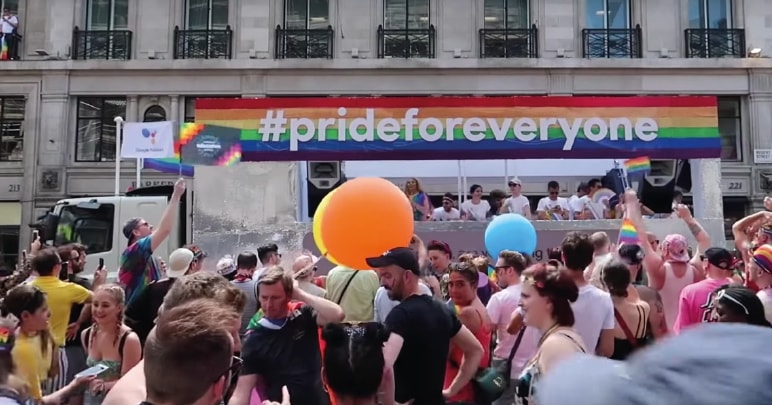 On Saturday 7 July, the London Pride march was hijacked by a small group of lesbians with a transphobic agenda. They claimed to be protecting lesbian identity from transgender people. Far from helping their agenda, though, it’s led to a backlash from other lesbians who want nothing to do with them.

Pink News reports that a group of roughly 10 anti-transgender protestors hijacked the march. They did so by pushing their way to the front and lying down until they were given permission to lead the demo. One person who supported the protestors tweeted an image of it:

My brave lesbian sisters ✊🏻💪🏻.
To every other woman out there, wake up, wise up, rise up.
Stand up for your rights!! #GetTheLOut #lesbianerasure #LesbianNotQueer #PrideInLondon #Pride pic.twitter.com/v8aF2YACQG

The organisers of Pride gave into the demands of these protesters and allowed them to lead the march. The organisers later claimed to “not condone” the group, but earlier said:

We are pleased that the parade set off as planned and that hundreds of thousands of Londoners are demonstrating that Pride still matters.

The protesters were handing out this leaflet as they marched: 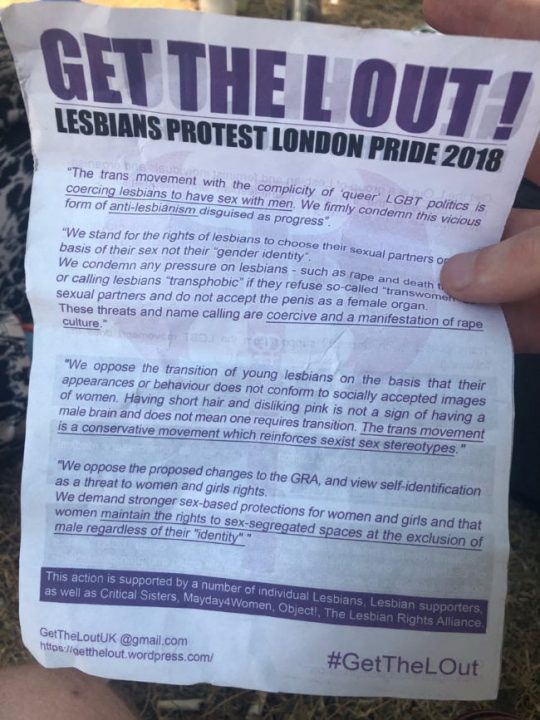 The protest is backfiring, though. Namely, because many lesbians have come out to say these people do not speak for them.

The protesters were using the hashtag #GetTheLOut on social media. If you look at it now, it’s been hijacked by lesbians taking issue with the campaign:

Shouldn't have to say this but to be clear, THIS lesbian has no wish to #GetTheLOut. Trans folk belong @ Pride. Lesbians belong @ Pride. Knee-jerk bigotry does not 🙁 Lots of contradictions within modern LGBT+ identities but no excuse for hate or exclusion.

Ah yes, #GetTheLOut. Simultaneously asking cis men to stop defining a woman's worth by her genitals and then defining a whole subset of women by theirs, and propagating false narratives about trans women. You're no ally of mine in gender or sexuality.

Remember that straight person we all knew at some point who says they're "fine with gays but not when they try to force it on me" yet can't give a single example and then spout homophobia as self-defence against this "trickery"? #gettheLout is remarkably similar.

Although there are still supporters too:

Lesbians are being erased and pathologised by gender ideology. Young lesbians are being told that refusing sex with male bodies is bigotry. We won't let this stand.#GetTheLOut #Pride pic.twitter.com/OU8IEjIt16

The lesbians who are standing against #GetTheLOut have also started a hashtag of their own – one that seeks to spread a positive message. The hashtag is #LwiththeT, and it’s showing that many lesbians in the LGBTQ+ community want solidarity – not division:

Cis female lesbians are standing with our trans family. Make your own version of this video and use the hashtags #LWithTheT and #NotADebate 🌈✨ “I’m a cis female lesbian and I support trans rights. Trans women do not erase me. Keep the L with the T” pic.twitter.com/HGrKtgXVeB

I’m a cis female lesbian and trans women do NOT erase me. Transphobia should never have place or platform in #Pride #LWithTheT #SistersNotCisters 🏳️‍🌈✊❤️ pic.twitter.com/zeloX1KSbc

Can't imagine what it must be like to go to pride and have your existence denied by members of your own community. As a cis lesbian I stand in love and solidarity with trans people #LwiththeT

LGBTQ+ stands for Lesbian, Gay, Bisexual, Trans, and Queer (with the + alluding to intersex people and others). The point of this grouping isn’t that LGBTQ+ people are one amorphous group; it’s that they face similar challenges. By coming together in solidarity, LGBTQ+ people have been able to push for their rights with a strength they wouldn’t have had alone. And the people trying to chop the T from LGBQ+ are finding out that many lesbians won’t stand for what they see as bigotry – especially when it comes from their own community.

Looking at the #LwiththeT hashtag has warmed my heart. Ultimate solidarity with all my queer sisters.