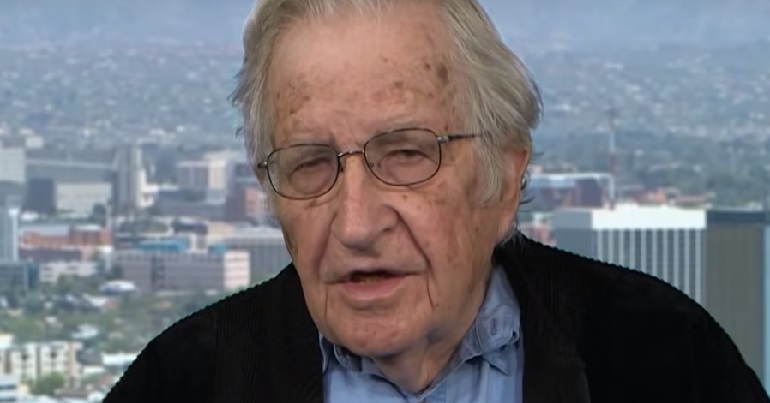 In an interview published on 12 July, Noam Chomsky told Jacobin that “there is not much time” to avert global catastrophe. He also talked about Iran, Venezuela, and antisemitism allegations aimed at the UK Labour Party.

Most importantly, he attended to the issue of global climate crisis. On the subject of rising sea levels, he said:

the calamity will be on a scale that is almost imponderable, most severe as you say for the poorest and most vulnerable, but awful enough for the rest of society as well.

Though we are developing solutions, he stressed the need to implement them immediately:

Is there a chance to avoid such catastrophes? No doubt. There are well-worked out and sound proposals; economist Robert Pollin’s work on a Green New Deal is the best I know. But the task ahead is enormous, and there is not much time. The challenge would be great even if states were committed to overcoming it. Some are. But it is impossible to overlook the fact that the most powerful state in human history [the US] is under the leadership of what can only be accurately described as a gang of arch-criminals who are dedicated to racing to the cliff with abandon.

The Donald Trump administration breached the Iran nuclear deal in 2018, and is now mounting tensions with the Middle Eastern country. Chomsky spoke in particular about the corporate media’s reporting on the intensifying conflict:

According to state propaganda, Iran is the guilty party. The United States has to decide whether and how to respond to Iran’s provocations and general malice. The liberal media, in their most critical stance, frame it differently — both sides are increasing tensions.

But reality, Chomsky claimed, is “quite different”:

Iran has lived up completely to the stringent terms of the JCPOA [Iran nuclear deal] (uniquely harsh for a signer of the Non-Proliferation Treaty). US intelligence and all other credible sources agree. The Trump administration withdrew from the treaty, effectively destroying it, and imposed savage sanctions designed to destroy the economy and punish the population.

Iran refrained from any reaction, hoping that the European Union might have the courage to depart from the master’s orders, but when it failed to do so, Iran began to take some steps to restore its nuclear programs — as indeed it is entitled to do under the NPT and once the JCPOA is abrogated…

All of this is dismissed to the margins.

Chomsky similarly discussed the history of provocations leading to the current situation in Venezuela. He said:

The United States at first tolerated [late Venezuelan president] Hugo Chavez as a bad boy who could be tamed, but that changed when he persuaded OPEC to reduce production to sustain prices for the benefit of oil producers. Shortly after, a military coup took place deposing Chavez and disbanding the government, openly welcomed by Washington and lauded by the liberal media.

The left-of-centre government made various errors during its years in power, Chomsky added, but:

The Trump sanctions have turned a severe crisis into a catastrophe, as recognized by the opposition’s leading economist, the well-informed Francisco Rodriguez — the usual impact of sanctions on civilian societies. Rodriguez, who puts the primary blame on [current president Nicolás] Maduro’s policies, reports that US financial sanctions are associated with a huge drop in oil production, worth about $16.9 billion a year, warning of disastrous consequences in a country which grows barely a third of the food it needs.

In recent days, Chomsky has been vocal about allegations of an ‘antisemitism crisis’ in the UK Labour Party.

Speaking to Jacobin, he said “anti-Zionism” has been historically conflated with antisemitism, and this perspective has been used to accuse Labour of the latter. Citing work by Israeli statesman Abba Eban, he said:

Here “anti-Zionism” means criticism of policies of the State of Israel. He made that quite clear by adding: “Let there be no mistake: the new left is the author and the progenitor of the new anti-Semitism.”…

The attacks on Corbyn and his reinvigorated Labour Party draw from the same sources. Thus, longtime Labour activist Chris Williamson is accused of antisemitism, with demands that he be expelled from the party, with the primary charge offered being that he said Labour had been “too apologetic” in defending its strong record of struggle against “the scourge of antisemitism.” More of the “real antisemitism.”

The issue, he said, is not only hotly contested in the UK:

The efforts, on both sides of the Atlantic, are becoming more passionate, in interesting ways, as it is becoming more and more clear that Israel is losing control over liberal public opinion and is compelled to rely for support on the most reactionary elements and the fundamentalist Evangelical movement, which combines fervent support for the most extreme Israeli actions with unparalleled antisemitism (consider the fate of those Jews who have not “found Christ” by the end of times and the return of Christ).