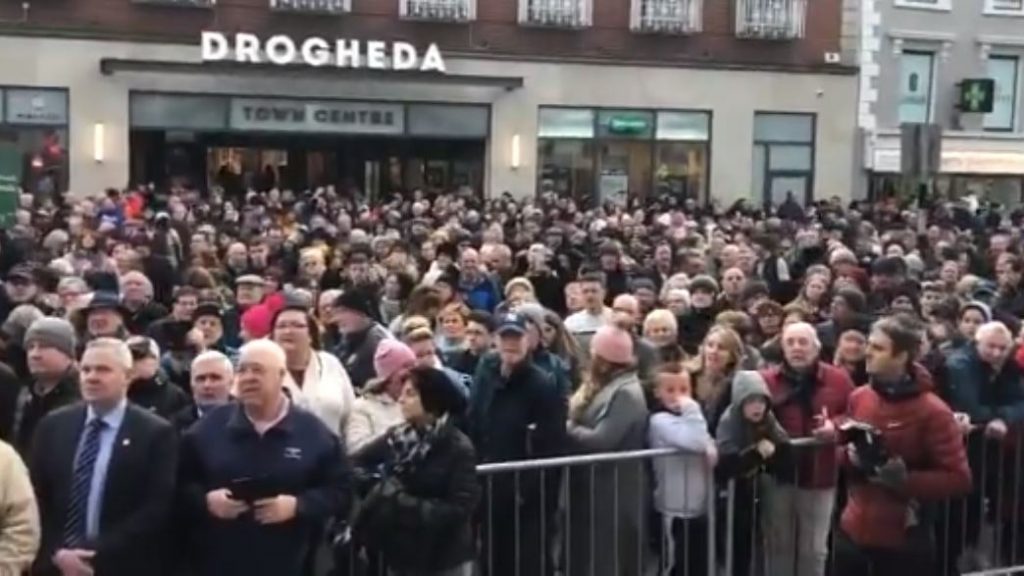 Thousands of people have taken part in a rally in Drogheda to voice opposition to drug-related violence in the town. The demonstration was organised in the wake of the murder of 17-year-old Keane Mulready-Woods earlier in January.

The teenager was murdered and dismembered and parts of his body were dumped in different locations in Dublin.

His killing was the third linked to an ongoing feud between rival gangs.

It sent shock-waves throughout the country, while representatives from Drogheda say people in the community are living in fear as the escalating feud continues with threats, intimidation and assaults targeting those both directly and indirectly involved.

The rally saw thousands of people including political and religious leaders march from the town’s historic Bridge of Peace to St Peter’s Church in the town centre.

Many carried placards calling for an end to the violence and imploring the government to fund addiction and community services. They say the move is essential in tackling the issue, which is mainly centred on the sale and use of cocaine.

A number of youth and addiction support workers spoke on the steps of the church about the struggle to keep community services open on “shoe-string” budgets, while trying to keep vulnerable young people away from drugs and crime.

Imelda Munster, the former Sinn Fein TD for the area, said: “There’s a real sense of fear and apprehension around the town.

“I was out in two separate estates that were directly affected by the feud, and it was the most eerie feeling I had ever gotten, three weeks after Christmas and there wasn’t one child in the street out riding a bike or kicking a ball, and that’s the sense of fear.

“People are prisoners in their own home so this opportunity was for people to come together and send a message that whoever is in the next government, that this feud needs tackling.”

The brutal killing of Mulready-Woods has made law and order a key issue in the general election campaign.

Varadkar promised the public that his government would tackle the issue head-on.

He said: “We need to stand shoulder-to-shoulder with the people of Drogheda.

“This is a great town, I’ve seen the town at it’s best, there are so many opportunities here, it’s a great place to live.

“Today is about standing shoulder-to-shoulder saying what’s happened here in the last few weeks isn’t for us and we want those people out and behind bars.

“I can promise the people of Drogheda that there will be additional garda every year, and we will continue to strengthen our laws and reform our courts and put more funding into disadvantaged areas to try and tackle some of the underlying causes that can give rise to crime.”

Town mayor Paul Bell said the event was non-political and for the community as a whole, and he urged those involved in the murder of Mr Mulready-Woods to return the rest of his body so his family can bury their son.