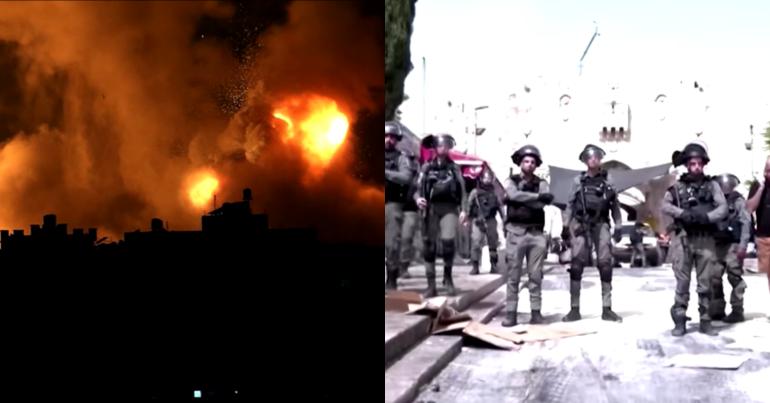 Campaigners are putting pressure on the UK to stop selling arms to Israel after 26 people in Gaza died following an airstrike.

The Israeli military launched overnight airstrikes on Gaza, hitting two border tunnels and two high-rise buildings. Health officials in Gaza said 26 people, including nine children, had died, most as a result of the airstrikes.

This is the culmination of weeks of Israeli violence in Jerusalem that have included Israeli forces shooting dead a 16-year-old boy and hundreds injured.

Seven of those killed in Gaza were from the same family,

Campaign Against Arms Trade (CAAT) has urged the UK government to stop arms sales to Israel after the airstrikes.

According to CAAT, the UK has licensed £400m of arms to Israel since 2015. The UK previously threatened to halt some of its sales to Israel in 2014 after concerns Israel Defence Forces could use British arms if a ceasefire was broken.

Dana Aboul-Jabine of CAAT condemned the airstrikes, saying the international community must take action against them:

Regardless of how many atrocities have been inflicted, Downing Street has continued to arm and support Israeli forces. UK-made arms have been used against Palestinians before, and it is likely that they will be again. These arms sales do not just provide military support, they also send a clear sign of political support for the daily abuse that is central to the occupation.

Time and again, successive UK governments have put arms sales ahead of the rights and lives of Palestinians. That long and shameful policy must stop.

Elbit Systems openly market their weapons as “field-tested” on Palestinian civilians in Gaza. They provide the Israeli military with over 80% of its military drone fleet, which is used to terrorise and massacre Palestinians in Gaza.

Its Kent site was also covered in red paint:

“This isn’t about Hamas”

The international community is urging an end to the violence. In the UK, MPs such as Zarah Sultana, Apsana Begum, and Nadia Whittome have condemned Israel’s actions.

Speaking on BBC Newsnight about the escalating violence, Husam Zomlot, Palestinian ambassador to the UK, said:

This isn’t about Hamas, this is about Israel. Israel provokes, Israel commits every crime you can imagine, Israel injures more than 300 worshippers – peaceful worshippers – this morning in al-Asqa mosque.

Israel evicts people of their homes, continues with its sheer violations of the very basic rights of people, and then they try to blame the react rather than the act. This must stop.