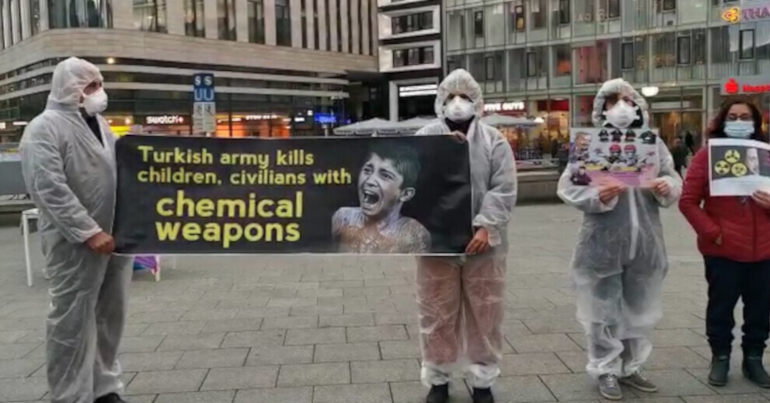 The Kurdistan Freedom Movement – together with solidarity groups and human rights organisations – are calling for an end to Turkey’s use chemical weapons.

According to the Kurdistan Freedom Movement and its supporters, however, the use of such weapons has increased since Turkey invaded guerrilla held areas in South Kurdistan – the area of Kurdistan that lies within Iraq’s borders (also known as Iraqi Kurdistan).

According to campaign group Peace in Kurdistan:

Since Turkey’s armed forces invaded northern Iraq/South Kurdistan on 23 April 2021 there have been reports that it has been using chemical weapons against Kurdish guerrillas in the regions of Zap, Metina and Avasia.

These areas are held by the Kurdistan Workers’ Party (PKK) and associated guerrilla forces. The PKK is demanding an end to the repression and authoritarianism of the Turkish state, and is part of the movement for a radical democratisation of the region through a bottom up system called democratic confederalism.

The frequency of the use of these weapons and their lethality has increased in the past two months – there are now reports of over 300 separate uses. The evidence of this international crime and the casualties resulting from chemical weapons use are mounting up.

“All living beings and nature are completely destroyed”

The Kurdistan Communities Union – or KCK – described the effects of the use of these weapons:

The chemical weapons used by the Turkish state are lethal weapons that cause suffocation, burns, impairment of the nervous system, and cauterization and destruction of tissue. In the areas where these weapons are used, all living beings and nature are completely destroyed. In addition, the remnants of these weapons settle in soil, water and plants, massively endangering the health and survival of the local population for years to come.

The interview with Samsun can be viewed here:

Effects are being felt by the civilian population

It is well known that chemical weapons are being used not only against the guerrillas, but also against the local civilian population. As a result of the use of these weapons, the civilian population is already suffering from severe health problems that have now reached extremely worrying levels. Many people in the region have been directly affected by the use of chemical weapons and have therefore tried to visit civilian hospitals in the region. However, they are being prevented from doing so by the KDP [authorities in Iraqi Kurdistan] and the Turkish state and are instead being treated in secretly established military hospitals. Although all these facts are known, the crimes against humanity committed by the Turkish occupation forces through the use of chemical weapons are still not recognized. This denial and the accompanying silence or open support provide legitimacy to these crimes.

Why are you silent?

The KCK concludes its statement with a call on people worldwide to speak out:

As the KCK Health Committee, we are reaching out directly to all institutions, organizations, human rights defenders, and environmental and animal rights activists who are committed to securing the future of humanity: Why are you silent?

It also makes a specific call for several international organisations – the Organisation for the Prohibition of Chemical Weapons (OPCW), the United Nations (UN), the Committee for the Prevention of Torture (CPT), and Doctors Without Borders – to condemn Turkey’s use of chemical weapons:

We would like to take this opportunity to directly address the OPCW, UN, CPT and especially Doctors Without Borders: Why are you silent regarding the genocidal crimes of the Turkish state in Kurdistan and the Middle East? To remain silent on the use of chemical weapons means to become accomplices and supporters of this crime. In particular, we would like to make the following appeal to the OPCW and Doctors Without Borders: We call on you to live up to your tasks, investigate the use of chemical weapons by the Turkish occupation forces in the guerrilla areas of South Kurdistan as soon as possible and without further passing of valuable time and to thus stop this crime. We would like to emphasize here that we are ready to provide all necessary support and assistance for these efforts.

Calls for an arms embargo and sanctions against Turkey

The Kurdistan National Congress, meanwhile, is calling for support from people worldwide:

……to condemn Turkey for its crimes and use of chemical weapons

….to put Turkish government and state officials on trial for their crimes against humanity and war crimes

….to impose sanctions on Turkey for using chemical weapons

….to impose an arms embargo on Turkey.

We call on the international press to break their silence and start reporting on Turkey’s use of chemical weapons.

We call on the international public and all democratic forces to show solidarity with the Kurdish resistance and support the Kurds’ demand for an immediate stop of Turkey’s attacks and use of chemical weapons.