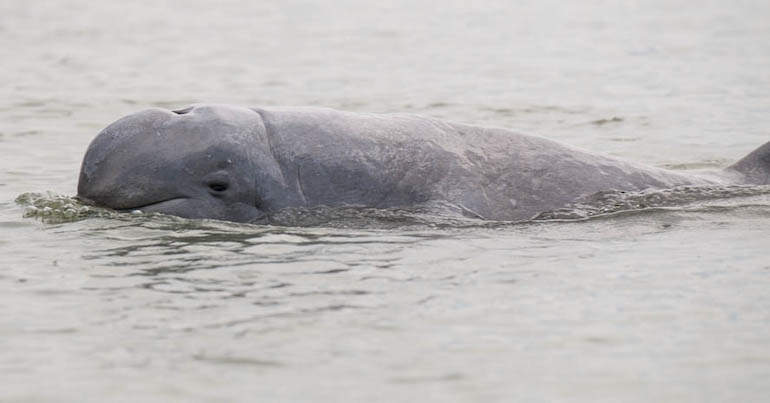 As the Diplomat recently reported, Cambodia is also seeking UNESCO World Heritage Status for the part of the Mekong river in its territory. The Environment Ministry’s under-secretary of state, Neth Pheaktra, said that the status would help to protect a number of endangered species, including the Irrawaddy dolphin.

However, the country’s Ministry of Mines and Energy approved a feasibility study in December 2021 on the construction of a dam on the Mekong river. It’s unclear whether the government ultimately plans to greenlight the Stung Treng dam, with a number of officials making remarks to the contrary.

A firm ‘no’ would be good news for the Irrawaddy dolphin. The World Wildlife Fund (WWF) warned in a 2018 study that the Stung Treng dam – along with another, Sambor – would:

affect the habitat of the Irrawaddy dolphin and other endangered species, probably lead to their extirpation.

The Irrawaddy dolphins, known for their bulging foreheads and short beaks, once swam through much of the mighty Mekong but in recent decades have been limited to a 190-km (118-mile) stretch from the northeast Kratie province to the border with Laos.

Their population has been in steady decline since the first census was taken in 1997, dropping from 200 that year to around 90 currently due to habitat loss and destructive fishing practices.

Speaking at a ceremony in Kratie, Hun Sen ordered authorities to set up floating markers around designated protection zones, in which there will be an “absolute ban” on all fishing. He said:

The Mekong river, which is home to near-extinct dolphins and fish species, must be well managed so that dolphins will not die from entanglement in gillnets

Gillnets are nets strung across parts of the river to snare fish. Hun Sen insisted that “dolphin areas must be protected completely”, adding that the animals’ presence contributed to local tourism.

Three healthy breeding-age dolphins died within a week of each other last month. The deaths alarmed conservationists, who called for both day and night patrols in order to protect the remaining dolphins from being killed by illegal fishing.

Eleven dolphins died in 2022, bringing the total number of dead dolphins to 29 in the last three years, according to the WWF.

In a statement, the WWF called on all relevant authorities “to enact and roll-out appropriate measures to urgently address the mortality” caused by the threats of gillnets and electro-fishing that take place in the dolphin conservation areas.

Irrawaddy dolphins are also found in rivers and lakes in Myanmar, Indonesia, India, and Thailand. Indonesia is currently working on plans to ban certain fishing gear that poses a threat to the species in Borneo’s Mahakam River.

Cambodia is home to the largest population of Irrawaddy dolphins. Its stretch of the Mekong river is home to lots of other species too, according to the WWF’s Marc Goichot. The freshwater resources and Mekong specialist explained:

The wide variety of habitats along this part of the Mekong in Cambodia creates perfect conditions for wildlife to thrive, making this area a miraculous area for freshwater biodiversity

The WWF is assisting Cambodia in preparing its application for UNESCO status. According to the Diplomat, however, the country’s hopes for World Heritage Status could be “derailed” if officials approve the Stung Treng dam.

A conglomerate called the Royal Group carried out the feasibility study into the project, which was completed in June 2022. Mongabay describes the Royal Group as Cambodia’s “largest and best-connected” conglomerate. It also provided finance for another Cambodian dam – the Lower Sesan 2 – on a tributary of the Mekong. In 2021, Human Rights Watch reported that this controversial project has:

profoundly harmed local communities, leaving them poorer and worse off. It has caused massive damage to the ecology of rivers upstream and downstream of the project, resulting in major losses in fisheries populations.

Plans for the Stung Treng dam have been floated before, starting in 2007. They haven’t materialised, however, due to concerns of the impact on people and the environment. Moreover, the Cambodian government announced a decade-long moratorium on dam-building on the Mekong river in 2020. As such, the approval of the Royal Group’s feasibility study has left citizens and scientists baffled and concerned,