Anna Soubry coming out in support of Keir Starmer? How predictable. 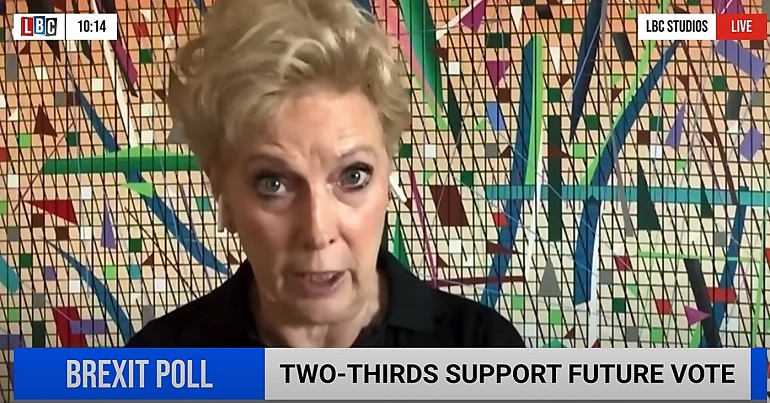 Former Tory minister Anna Soubry has come out in support of Keir Starmer. She’s said she’ll vote to get the Labour Party elected at the next general election. This sums up the state of politics in the UK – because if ex-Tories are supporting the opposition party, then it’s really no opposition at all.

Soubry was a minister under David Cameron, eventually leaving the Tories to form the ill-fated Change UK The Independent Group (for Change) party (consisting of centre-right Tory and Labour MPs). After losing her seat at the 2019 general election, Soubry returned to her old job of being a barrister – all while keeping herself in the public eye with media appearances. Now, during one such appearance on LBC, she has come out in support of Starmer.

Soubry was interviewed by Matthew Wright on Monday 2 January. She told the host:

I will vote to make sure we have Keir Starmer in No.10 and not have the Conservatives in government anymore, they are not fit to govern.

This is despite her disagreeing with Starmer’s stance on the EU. Soubry claimed to be “disappointed” with his “stance on the EU and the single market”. However, she still said:

"I will vote to make sure we have Keir Starmer in No 10 and that we don't have the Conservatives in government any more. They are not fit to govern."

Quite the turnaround from Soubry, whose anti-Brexit fervour partly led her to quit the Tory party. However, despite all her centrist overtones, she’s still right wing – with a voting record littered with support for social security cuts, authoritarian asylum policies, and not taxing the rich. Of course, the bigger point here is that a former Tory supporting the Labour Party is problematic for all of us.

Full-fat or diet Tory: no choice at all

I'd like someone to give me a good reason as to why a former Tory minister supports Starmer as PM?

Did she change her mind, her ideology? Suddenly has become more compassionate?

Ofcourse not, this is objectively not a good thing. https://t.co/aUFwLEDGFB

There was no debate that was won by Labour in order to change the hearts and minds of the electorate.

They have simply moved into Tory territory. Fine, but when Labour ultimately disappoints after years in government, the cycle will continue.

You don’t need to tell this to most people on the socialist left. As one Twitter user pointed out:

If a left winger was leading Labour she would have said Lib Dems.

She's only comfortable saying this because Starmer is ideologically closer to David Cameron than Tony Benn https://t.co/6GxHetpdaW

The evidence against Starmer is clear – from not properly supporting striking workers to courting arms manufacturers via racist rhetoric over refugees to expelling Jewish socialist members from the party. So, expect the Labour leader to embrace Soubry’s support for his party. After all, Starmer’s track record on allowing Tory MPs to join his fold while expelling decent left-wing people speaks for itself. Meanwhile, the rest of us go into 2023 stuck with a choice of ‘full fat’ Tory in government and the ‘diet’ option in opposition. That is no choice at all.