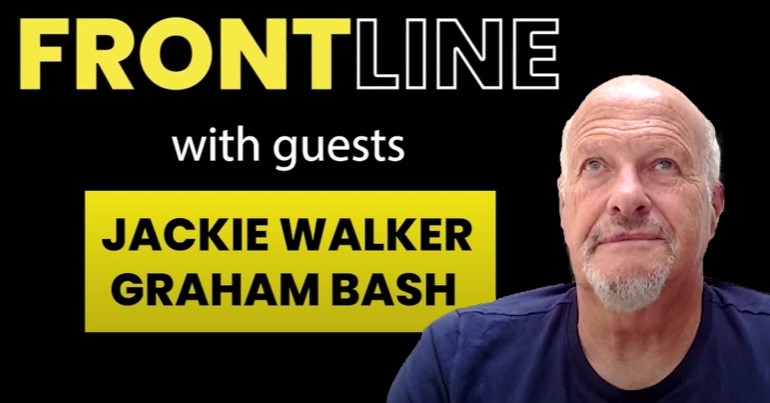 The Labour Party has expelled Jewish member of over half a century Graham Bash. It comes amid an ongoing purge of left-wing voices from the party. In an exclusive interview with The Canary, Bash says people must resist the party’s ongoing “witch-hunt” before it ‘guts it’ of all socialists.

On the frontline of the Labour “witch-hunt”

As The Canary previously reported, Bash was chair of South Thanet Labour Party. He was a member of the party for 52 years. Bash is the political officer for Jewish Voice for Labour (JVL), and he’s also the political secretary of the Labour Representation Committee (LRC).

For years and years, I was saying this witch-hunt[s]… real target is Jeremy Corbyn… And of course, I underestimated it. They’ve got rid of him, and it’s continued. And why is it continuing? Because [of] the Corbyn legacy… members, most of whom are on the left, are still here. And they want to gut the party of a vital part of its membership. So it will not stop, I’m quite convinced, unless and until they manage to do that.

You can watch the full interview from 7pm tonight here.

Since The Canary recorded the interview, Labour’s governance and legal unit (GLU) has been trying to boot Bash out of the party. In a letter it sent him in August, it said that it had:

reason to believe that [Bash] is ineligible to be or remain a Labour Party member because you are a supporter of Labour Against the Witchhunt (LAW).

The GLU goes on to state that its evidence was:

In January 2020 [Bash] signed an Open Letter from LAW. The signature included the organisations you are associated with “LRC, JVL, LAW”.

LAW is one of four groups Labour recently proscribed. Bash argued that when he signed LAW’s open letter, Labour had not proscribed the group. He also confirmed he was not a member of it. Bash additionally noted that:

There is, to the best of my knowledge, no such category as LAW ’supporter’. I therefore deny that I am a ‘supporter’ of LAW. There is no justification for this investigation.

On Friday 5 November, Labour’s GLU booted Bash out of the party anyway.

JVL posted the GLU’s email to Bash on its website. In short, it said that a new National Executive Committee (NEC) panel looked at Bash’s case. It found that:

on the balance of probabilities, that you had signed the Labour Against the Witchhunt open letter of January 2020 and that LAW was an organisation that you were affiliated with.

The NEC Panel noted that these facts were not in dispute… [It] considered that this amounted, in its opinion, to support for Labour Against the Whichhunt [sic], which the NEC has declared to be inimical with the aims and values of the Labour Party.

So, Bash is out. He has 14 days to appeal the decision to the Labour Party.

JVL hit out at Labour’s actions. It said:

The bottom line is that Graham… has been excluded for doing something that was perfectly legal at the time – supporting (whatever that means) an organisation there was no restriction on supporting at the time.

I’ve known and campaigned alongside Graham Bash for over 40 years. He is one of the finest socialists I have met. I do not believe it can be just to expel someone from the Labour Party based upon actions or associations with an organisation before it has been proscribed.

Bash said during his interview with The Canary that in terms of Labour’s ongoing purge of the left:

there’s going to be resistance. People aren’t just going to lie down and be expelled… people will actually resist. They’re going to build a movement from outside.

This is a sentiment echoed by JVL, which said:

Democracy in the Labour Party is now under serious assault with the whole current wave of investigations, exclusions and purges generally.

We must and will continue to resist.

Bash will likely challenge his expulsion. In the meantime, as he and JVL point out, the resistance against Labour’s ongoing purge must continue.

Watch the full interview with Bash and Walker from 7pm on 7 November here.