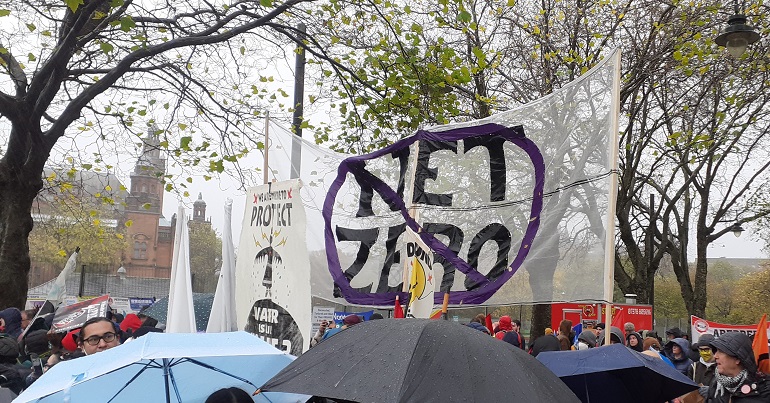 On 6 November, people took to the streets for a global day of action on the climate crisis. As the UN climate summit COP26 is taking place in Glasgow, thousands took to the streets there. Indigenous communities were among the many different blocs taking part. As the march left from Kelvingrove Park, these communities led from the front. This was fitting given research shows they’re among the worst affected by this crisis.

Research also suggests governments are failing them. It’s hardly surprising then that the indigenous people who spoke to The Canary on the day felt so much anger towards governments as well as corporations. So maybe, as this Twitter user suggests, those in power need to experience the climate crisis to properly act:

If I organized #Cop26 it wouldn't have been in Glasgow, it would have been on Abaco Island that was devastated by the climate impacts of hurricane Dorian. Then world leaders might understand *first-hand* what devastation is, and how hard it is for local people to build back pic.twitter.com/9pGdo6Nx3D

Even in situations where corporations appear to be working on a solution to the climate crisis, it seems they’re doing it “in a business-as-usual way”. They seem to have an attitude that suggests we could simply replace fossil fuels with an apparently eco-friendly kind of fuel, and we’ll all go on as before. This effectively means we’re not dealing with the root cause of the crisis for indigenous people. Because, as this environmental group pointed out, some apparently eco-friendly solutions aren’t eco-friendly at all:

The people that spoke to The Canary in Glasgow were clear why they’d come. They don’t trust governments who have corporate ‘false solutions’, and they came to make their voices heard.

Sahar Khadjenoury is from the Navajo nation in Utah. She’s also joined the Indigenous People’s Action Group and works with FNX First Nations Experience television network. This network broadcasts “Native American and World Indigenous content”. She said she was there to bring a message to the world from the Navajo in Utah.

Part of her message is to tell people:

we’re also dealing with massive issues like uranium mining… we’re considered ‘downwinders‘ [a name given to people suffering from cancer following 1950’s US nuclear testing in Utah], cancer is running rampant in our communities and we don’t have a large enough voice to make these things stop right here right now. So hopefully somebody will hear our voice.

Khadjenoury believes the people who profit from the natural resources her community is “sitting on” want to silence her community’s concerns. But, she’s not heeding that. In fact she’s come to Glasgow to amplify her community’s voice.

Dr Angele Alook is from Big Stone Cree nation treaty eight territory. She’s also a professor at York University in Canada. Alook believes we can find a climate solution, but through:

She’s calling on the “nation state of Canada”:

to have a nation to nation relationship with indigenous people and [to] respect our treaties and respect everything that’s written in the United Nations declaration on the rights of indigenous people, especially free, prior, and informed consent.

She was emphatic in explaining how governments and corporations had trampled on their rights:

They stole our land! It’s land theft! Indigenous people only have 0.2% of our land [left]. Our land was stolen by the crown and then sold to corporations. And now today we live in a colonial capitalist regime

She said that in Alberta where she comes from:

Ina-Maria Shikongo is from Namibia and the climate movement Fridays For Future. She explained that Canadian company Recon Africa is exploring for gas and oil in the Namibian Kavango Basin. Shikongo said this basin is home to the largest population of African elephants. Not only does Recon’s exploration threaten their existence, but it impacts on the San people living in the Basin. Shikongo explained:

The water that is being used for the oil extraction is needed for their wildlife but also for the food systems. The San people are foragers and their livelihoods will definitely be affected.

We have seen how Recon Africa, all the way from Canada, has been doing things; ghosting communities, none is aware of what’s really going on, they’re not giving us the bigger picture. In the beginning they were talking about fracking and since we started making noise they are denying that there’ll be fracking even though we know that [there will be]. Well, especially as they’ve said the only way that they can actually get anything out of there is by fracking.

We have to protect the Kavango basin because Namibia is a desert and we are already suffering from droughts all over the country and this will definitely bring instability and also impair food security. It will definitely destabilise us.

So neo-colonialism has to stop and the global north leaders have to wake up to this reality.

She also said she sees this as:

genocide and ecocide… colonial powers have been killing our people already for centuries and these developments are also rooted in colonialism… and now they (defenders of the land) are being sacrificed for gas and oil industries, which I call genocide. And COP26 is also partly responsible because they don’t want to really talk about it.

Ashley Hall is from North Dakota and a member of the Indigenous Environmental Network. Hall said the climate crisis has affected her community as:

our growing season is changing, it has been extended by seven days… you see our landscapes becoming drier because we are facing a drought. Our farmers and our ranchers need help… to navigate through the drought that we’re in

She added that before oil and gas came on to their reservation, ranching and farming was the main way of life. But now:

She feels this exploitation comes as a result of the government and corporations seeing them as:

a disposable population. So, basically they’re still colonising us and our landscapes, bringing their oil rigs to our landscapes when we don’t want them

From the mealy-mouthed promises and ‘solutions’ to the climate crisis we’ve seen so far at COP26, it’s unlikely these campaigners will find real solutions at the government level. The real answers will come from communities. But this global day of action is important, as it showed once again how communities can organise and work together. And as our planet’s future hangs in the balance, that’s probably how we’ll have to do “business as usual” if we’re to have any real hope of a sustainable future.