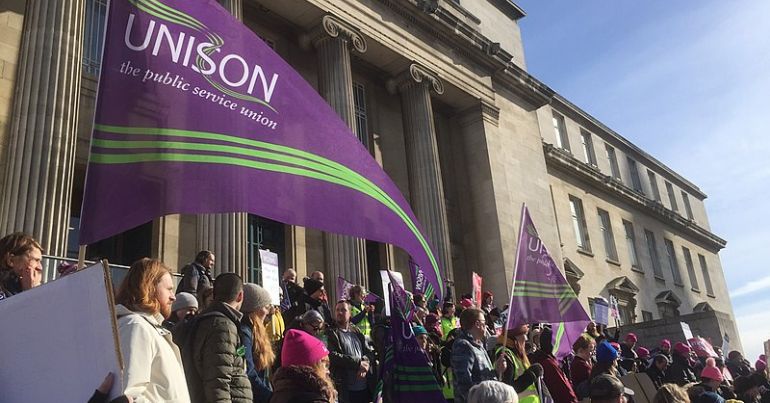 Unelected British prime minister and billionaire Rishi Sunak wants to take away your right to strike. At least, that’s what he seemed to be getting at when he floated the idea of a new anti-worker law this week.

The proposed legislation could see public sector workers who refuse to come in and provide a ‘minimum’ service during industrial action sacked. The laws may also allow employers to take legal action against trade unions.

This is a clear attack on a core democratic right – and the Daily Mail reported that the laws could be brought to parliament by the end of the month.

In his first major speech since becoming PM, Sunak said that the right to strike:

…has to be balanced with the right of the British public to go about their lives without suffering completely undue disruption in the way we’ve seen recently.

‘And that’s why I have said we will introduce new legislation that restores that balance and crucially protects people’s lives as well as their livelihoods.

We’re currently – with 11 other trade unions – taking legal action against the last set of laws they put in place, and we would look at doing that in future as well.

And I think if the government gets away with what it’s doing, we’ll be left with an inherently unsafe railway system.

Even Labour leader Keir Starmer, known for his complicated relationship with the unions, made some encouraging noises:

I don’t think this legislation is going to work and I’m pretty sure they’ve had an assessment that tells them that. It’s likely to make a bad situation worse.

These new proposals must be seen in their proper context. Under the Tories, a range of authoritarian bills have passed into law. And they have brought with them the sense of democratic space narrowing before our eyes.

With the Spy Cops Bill, the Policing Bill, the Overseas Operations Bill, and the Snooper’s Charter, it is evident that many of the basic rights which have been won over many years are being stripped back by successive Tory administrations.

Trade unions – already subject to severe restrictions from the Thatcher era – seem to be the next target.