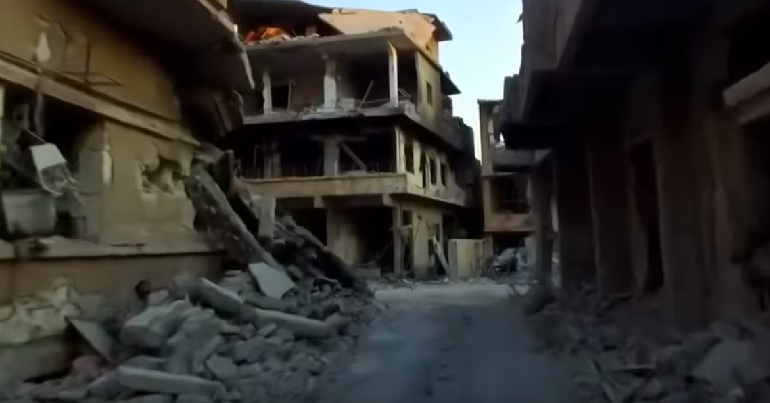 The Canary‘s latest investigation into the Syrian government, as part of our #FollowTheMoney series, has found that the over half of its newly appointed ministers have had their assets frozen by the EU. We can confirm not only that their assets have been frozen on grounds of the violent repression of Syrian civilians, but also that the government has been freezing the bank accounts of innocent people, whilst thousands more died in its custody.

The EU has frozen the assets of Syrian ministers over their alleged role in violence against civilians in Syria.

The European council has further confirmed that it has placed eight ministers on a travel ban. HM Treasury and the Office of Financial Sanctions Implementation (OFSI) have since confirmed.The UK must also uphold the sanctions as a current member state of the EU.

In view of the gravity of the situation in Syria, and considering the recent ministerial appointments, eight persons should be added to the list of natural and legal persons, entities or bodies subject to restrictive measures.

The new restrictive measures freeze assets based in the EU and prevent the individuals from attempting to access them or transfer funds unless directly instructed to by OFSI.

The EU council has stated that, as government ministers, each of the named people:

shares responsibility for the Syrian regime’s violent repression against the civilian population.

In August 2020, prime minister Hussein Arnous appointed the twelve new ministers to the Syrian government. Eight of these have been sanctioned by the EU.

Over half of new ministers sanctioned

The ministers now sanctioned by the EU are:

The European Council confirmed that as part of the sanctions, it has also frozen the assets of the Syrian central bank.

The sanctions currently in place against the Syrian regime were introduced in 2011, in response to the violent repression of the Syrian civilian population. Companies and prominent business people who benefit from their ties with the regime and from the war economy are also subject to sanctions.

Additional restrictive measures adopted by the EU include a ban on the import of oil, restrictions on certain investments, the freezing of assets held by the Syrian central bank in the EU, and export restrictions on equipment and technology that could be used for internal repression or for the monitoring or interception of internet or telephone communications.

Currently the EU has sanctioned 288 individuals, with a further 70 “entities” subject to sanctions.

They froze the assets of innocent civilians

Sanctions come after the Syrian government froze the assets of hundred of civilians who were living in areas formerly held by anti-government groups.

They did this by claiming the individuals were terrorists.

The government arbitrarily designated hundreds of people from areas formerly held by anti-government groups as terrorists and froze their assets, in line with Decree 63 and the 2012 Counterterrorism Law, which authorities often used to criminalize the work of human rights activists and humanitarian workers. The measures have far-reaching impact on families and relatives, even if they had not been designated as terrorists.

And that’s just for those who were lucky enough to still have their freedom.

HRW has also claimed that since 2011, thousands of people have died in Syrian government custody. The organisation stated:

Tens of thousands of persons have been detained or disappeared since 2011, the vast majority by government forces. Thousands died in Syrian government custody from torture and horrific detention conditions. In 2019, the government updated the records of hundreds thought to be disappeared or dead, but none of their families have received their loved ones’ remains or additional information from authorities.

HRW, along with eight other Syrian civil society organisations, demanded that the UN Security Council in May 2019 acknowledge the Syrian government’s actions. These included a request to:

urgently address the widespread arbitrary detentions, kidnapping, torture and other-ill treatment, and enforced disappearances of tens of thousands of Syrians at the hands of the Syrian government, armed anti-government groups, and ISIS.

But it is still happening, and it’s getting worse everyday.

Over 1,000 women arrested or kidnapped

Despite the work of HRW and several calls for intervention, the Syrian Observatory of Human rights (SOHR) has stated that crimes, particularly against women, are increasing every day.

On 28 October, SOHR made an urgent appeal for the release of women arrested or kidnapped in Afrin, a city located in northern Syria.

SOHR appealed to all international civil and human rights bodies, and women organisations, to act. It stated:

As violations and crimes against women in Afrin are increasing daily, the latest statistics show that the number of women forcibly arrested or kidnapped and held in prisons of the Turkish occupying forces and their armed proxy factions has exceeded 1,000, some of whom have been released after paying ransoms to the armed factions or financial fines to courts affiliated to the Turkish forces.

However, the fate of 400 other women remains known, including women who appeared recently in a video footage when they were found in a prison of “Al-Hamzat Division”, after clashes between “Al-Hamzat” and local gunmen from eastern Ghouta.

SOHR’s appeal claims that some of the women told family members who visited them that they were abused, and they begged to be released.

And now, if people manage to escape all of that, the government has made it extremely difficult to access vital resources.

In addition to the allegations of violence against civilians, HRW claims that the Syrian government has used foreign aid as a tool for repression.

The Syrian government enforced a legal and policy framework that enables it to co-opt millions of dollars of international funding earmarked for humanitarian aid and reconstruction. The government restricted humanitarian organizations’ access to communities that needed or allegedly received aid, selectively approved aid projects to punish civilians in anti-government held areas, and required that humanitarian groups partner with security-vetted local actors.

Based on past incidents, there is a continuing risk that aid be siphoned through the abusive state apparatus to punish civilian populations it perceived as opponents and reward those it perceived as loyal.

Despite having recently been appointed, it’s reported that the government has vowed to resign in July 2021.

According to the newspaper Asharq Al-Awsat, the government must do so to comply with Article 125 of the Syrian constitution.

The current government will continue its work until next July, which is the expected date for the next presidential elections, after which it vows to resign and relegate itself as a caretaker govt. until a presidential decree is issued to name a new premier, according to Article 125 of the Syrian constitution.

Despite its vows to stand down, HRW has confirmed that the US and the EU have enforced tighter restrictions on the Syrian government.

SOHR has issued a call for organisations not to remain silent. It stated:

We also call for fair trials, bringing the perpetrators of war crimes and crimes against humanity to justice, protection of the remaining civilians in Afrin, withdrawal of Turkish forces and their proxy armed factions, securing the return of all forcibly displaced civilians, and providing everything needed for their safety and stability.

The full list of individuals and organisations from Syria that are being sanctioned under UK law can be found here.