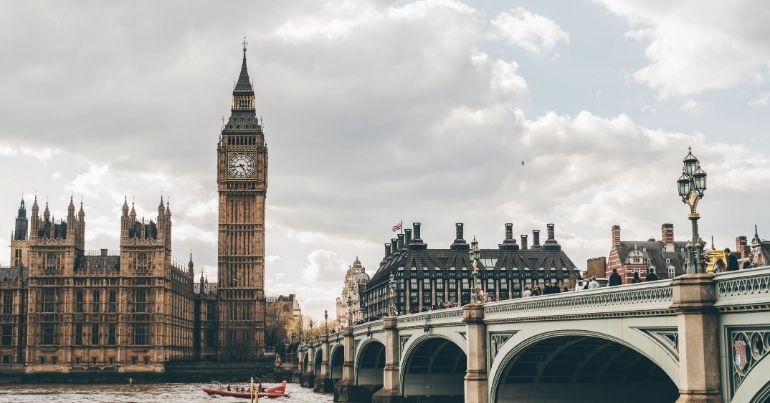 On 12 November, three activists scaled the Houses of Parliament to hang an oversized open letter to the people of the United Kingdom. The peaceful protest marked the launch of Africans Rising for Justice, Peace and Dignity’s #ReRightHistory campaign, calling for debt cancellation for Africa and “an honest acknowledgment of the harm and human cost of slavery and colonialism”.

The letter calls for:

The time is now for Africans everywhere to work together and with our allies to demand that former colonial masters correct their wrongs through reparations, cancellation of African countries’ debts, truth and reconciliation, etc., in the face of global racism against Black people.

As part of the same campaign, Africans Rising sent a letter to the queen on 10 July 2020 asking for the same acknowledgments and reparations, saying her voice “is one that can help turn the arc of world history”.

Africans Rising is asking the people of the UK to sign a petition calling on the queen to respond to their requests as part of the “struggle for global peace, justice and dignity”. As a constitutional monarch, the queen does not intervene in any political or personal disputes. While human rights and climate justice issues should not be considered political matters, they may be construed as such by the crown.

The campaign seeks justice for the human rights abuses committed by Britain as part of its colonial project in Africa. It also seeks to highlight the fact that Communities of Colour across the globe are disproportionately impacted by the climate crisis.

A spokesperson for Action for Climate Truth and Reparations said:

Debt is causing climate change right now. African countries are forced to commit themselves to development projects in order to borrow money. This is coal mines, diamond mines, deforestation, monoculture plantations and textile factories that go with undoing environmental protections and forced removal of indigenous people from their lands. This is modern colonialism. These projects bring short-term gain to foreign creditors but they destroy the environment, erode community networks, destabilise nations and kill people. This must end now.

The people of the UK should take the lead and end the colonialism that still lives in UK supply chains, financial industries, racist institutions and corporate and trade regulations that are the pillars of modern colonialism and chattel slavery that the UK helped to bring about. Cancelling debt saves lives.

Individuals and organisations took to Twitter to show their support for the campaign:

Climate change and the systems driving it are the continuation of a violent history, a history that includes the exploitation of people of colour and the natural resources of our world. https://t.co/iCHgHDf3Fj

We look forward to seeing what’s next for the #ReRightHistory campaign.
Featured image via Eva Dang/Unsplash.