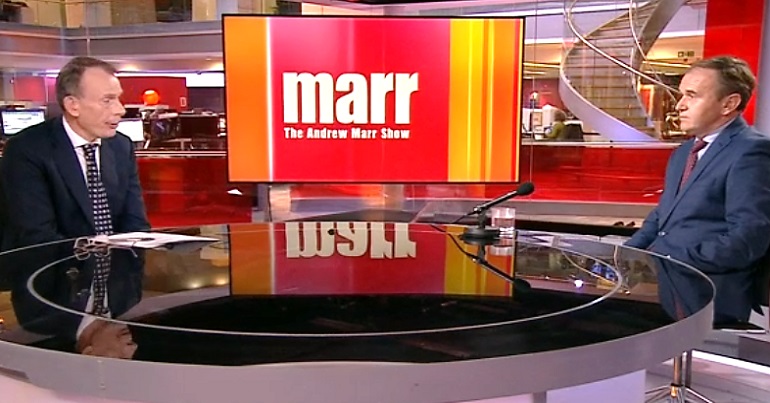 A comment by a Tory minister on the Andrew Marr Show was quite telling. In fact, it showed that even with Dominic Cummings out of the picture, the mentality in government is still one of Brexit at all costs – because we’re still the British Empire, right?

Cummings: gone, but not forgotten

Yes, Cummings will reportedly be leaving Downing Street as Boris Johnson’s senior adviser. The Canary reported that there have been:

days of turmoil in Number 10, which saw the exit of the prime minister’s right-hand man Cummings and Johnson’s director of communications Lee Cain

Cummings has been central to the government’s Brexit stance. BBC News wrote that as head of campaign group Vote Leave, he:

was credited with the ‘take back control’ slogan that appears to have struck a chord with so many referendum voters, changing the course of British history. …

It was… Cummings who devised the high-risk strategy of pushing for an election last year to be fought on a ‘Get Brexit Done’ ticket, focusing on winning seats in Labour heartlands, something no previous Tory leader had managed to do in decades.

And as Bloomberg said, Cummings was “hell-bent on pushing through a no-deal Brexit and ignoring parliament”. So, with his departure, will we still see this ‘Get Brexit Done’ approach from the Tories? If a minister’s appearance on Marr was anything to go by, the answer is yes.

One of Marr’s guests on Sunday 15 November was environment secretary George Eustice. He said, among other things, that in the event of a no deal Brexit, UK dairy farmers shouldn’t worry. This, Eustice said, is because:

we’ll be applying tariffs as well on imported EU goods.

Many people were unhappy with what Eustice said – not least his ignorance of basic economics. That is:

“If we make imports so expensive that nobody can afford them, we will save British Farming!”

And Brexiters believe this shite.

But then Eustice took it one step further. He said:

in a non-negotiated outcome, what would happen is companies like Arla, which is a big Danish company and sells brands like Lurpak in the UK, that are manufactured in Denmark, they would have to relocate that production to the UK.

Yes, you heard that right. A senior Tory government minister seriously thinks that it’s up to a multinational company to relocate production to the UK if it wants to sell a product. You can guess how some people on Twitter reacted:

Lurpak will have to relocate to U.K. if the brand — produced in Denmark since 1901 — wants to sell into the U.K. after Jan 1st, says deluded bloke on the telly. https://t.co/cwffO3tIQh

In the event of a no deal, Lurpak would simply relocate to the UK – George Eustace, 15th November 2020

These people are fucking stupid.

To be fair to Eustice, Arla does already have some production facilities in Britain. But it still makes Lurpak in Denmark. And it’s this ‘Make Britain Great Again’ mentality which Cummings lives by.

So, even with him gone it seems this toxic and frankly arrogant attitude to Brexit remains in the Tory ranks. Thinking that a multinational corporation would change its production methods just to satisfy Tory wet-dreams of long-forgotten empire? Utterly laughable – and utterly deluded at the same time.