An ex-fox hunt master is standing for police commissioner. Isn’t it time you checked out your local candidate? | The Canary 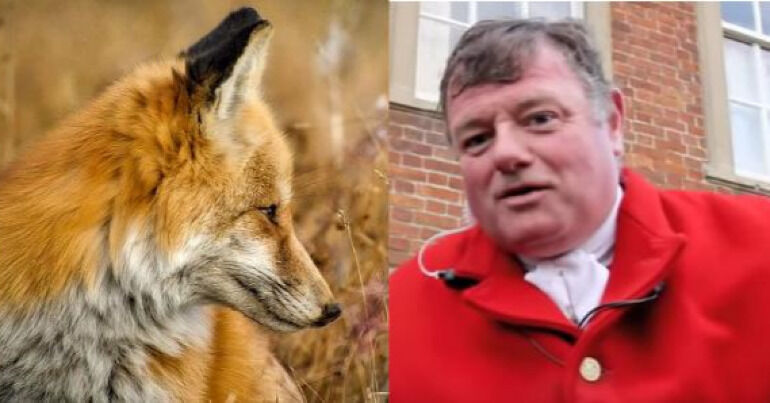 A former army major and ex-fox hunt master is running as the Conservative candidate to become Police & Crime Commissioner (PCC) for Wiltshire and Swindon. Jonathon Seed was master of two local hunts for twenty years, from 1992 to 2012. Fox hunting with hounds was made illegal in 2004.

Seed, who says that he is “not an advocate of political correctness”, still has many close ties to hunting, and to those who promote hunting, in both his business and personal life. Despite this, he has managed to hold on to his position as a Wiltshire councillor. The Canary outlines some of Seed’s connections to fox hunting, and asks the question: can he be trusted to be PCC?

This question is particularly pertinent given that the hunting lobby is very aware that getting pro-hunting people into PCC positions around the country will be beneficial for their hobby. This can be seen when reading leaked minutes from a Master of Foxhounds Association meeting from April 2020. In the meeting, the chair states that Vote-OK, a powerful pro-hunting lobbying group, must stay afloat with £18,000 worth of donations in order to “help with next year’s PCC elections”. Vote-OK exists entirely to get pro-hunting people into positions of power.

Although there is currently no evidence that Seed is linked to Vote-OK, its existence adds weight to the questions voters need to consider when electing their PCC.

Against the fox hunting ban

Seed states that if he is elected as PCC, he will recruit 100 more police officers, who will “ensure that rural crime is targeted and dealt with”. That should, of course, include cracking down on illegal hunting and prosecuting those responsible.

When Seed was master of Avon Vale Hunt, he insisted that hunting foxes was “important for freedom“. And in 2011, he said to the Wiltshire Times:

We’ll get the ban overturned in due course…The minister in charge has said he’d like to see it overturned. We’ve just got to wait for the right time

Now that Seed is vying for the top job of PCC, he has, apparently, changed his stance. He now says:

It is true that along with many other local people and politicians I campaigned for a repeal of the ban, but as time has gone on I have changed my opinion on the ban and in recent years I have formed the view that there are more important issues to be dealt with by Parliament, our communities have moved on and I believe that we should leave the legislation as it is.

But a recently-leaked document reveals that Seed was listed as one of This is Hunting UK’s (TiHUK) regional coordinators in 2018. TiHUK is an organisation whose main aims include repealing the hunting ban, as well as promoting hunting to school children. One of its contributors describes its fox hunting readers as “the persecuted, minority ethnic group known as the ‘rural brit’”, arguing that hunting with hounds isn’t cruel.

Seed says in the Wiltshire Times that:

I finished [as hunt master] nine years ago and I have not ridden with any hunt for several years. I am not a member of any fox or deer hunt or any of their supporters’ clubs.

My declaration of interests has always been correct and up to date throughout my time as a councillor.

Yet his register of interests fails to mention his involvement with TiHUK.

It seems that Seed has forgotten to update his LinkedIn page, which still says that he is chair of the hunting group Ross Harriers. He was pictured riding with the pack in the 2015-2016 season. Ross Harriers openly promotes fighting the hunting ban in its logo. Seed recently deleted Ross Harriers from his list of Facebook likes after anti-hunting campaigners flagged it.

Seed is a director at Larkhill Equestrian, an eventing facility for horse competitions, located next to the army’s Royal Artillery Barracks, in an MoD training area. Larkhill has a number of ties with the Royal Artillery Hunt (RAH), the army’s “only remaining military hunt in the UK”, which is also based in and around the MoD land. Seed himself was a master at the RAH for eight years. One Larkhill director, lieutenant colonel Angus Cameron, is the Royal Artillery Hunt’s current chair. And three other Larkhill directors have been listed as recent officers of the hunt.

Seed’s links to the RAH continue. His daughter Libby was brought up hunting with both parents, who were masters at Avon Vale Hunt at the same time. Seemingly, she continues to ride with the RAH, announcing on her Facebook page that she went “cubbing” with them in October 2020:

As The Canary has previously reported, ‘cubbing’ refers to the cruel practice of setting hounds on a young fox cub in order to train the dogs for the main season. Robert Pownall, founder of anti-hunting organisation Keep The Ban, told The Canary:

‘Cubbing’ is perhaps the darkest and most repugnant secret of the hunting world. The seemingly innocent sounding term refers [to] the practise of ripping small fox cubs to pieces. It is not only a barbaric activity, but is very much illegal.

It is simply disgusting that someone would publicly admit to one of the most disturbing elements of fox hunting. There is nothing “great” about tearing a small defenceless animal to pieces, and her admission to taking part in such an activity is a telling reflection of just how widespread ‘cubbing’ still is. It is estimated that up to 10,000 fox cubs are killed during the ‘cubbing’ season each year.

Since the Hunting Act was passed, hunting packs have been getting away with business as usual by saying that they’re ‘trail hunting’. This is where hounds supposedly follow an artificial scent instead of a real fox. But as The Canary has previously explained, trail hunting is often used as a cover-up for illegal hunting. In fact, major landowners such as the National Trust recently suspended trail hunting on their land. This came after police announced that they were investigating leaked webinars that allegedly exposed ways that hunts cover up illegal fox hunting.

On 12 February, director of the Masters of Foxhounds Association, Mark Hankinson, was charged with “encouraging others to break hunting law”. He was one of the senior members of the hunting lobby to speak on the webinar.

Hunts across the country have been filmed and exposed breaking the law time after time, chasing and killing foxes or digging up badger setts. Of course, Seed might insist that the packs that he was – and is – associated with don’t break the law. Yet accounts from hunt saboteurs paint a different story. Saboteurs are the people on the ground, out in the countryside week in, week out, monitoring and filming the hunts, and attempting to stop them from killing foxes. The saboteurs have reported finding murdered foxes at the Royal Artillery Hunt.

Meanwhile, in 2013, two Avon Vale men pled guilty to interfering with a badger sett the year before, while they were under Seed’s watch. Charges against Seed for the same incident were dropped. In 2015, three men apparently connected to Seed’s latest hunting pack the Ross Harriers, were convicted of illegal hunting after police found “three dogs with facial scarring and a bag containing a live fox” in their trailer.

It should come as no surprise that a quick look at Seed’s Facebook page reveals that the councillor likes the Countryside Alliance (CA), which strongly campaigns for a repeal of the hunting ban. It was recently reported that the CA allegedly holds a database of anti-hunting activists. The organisation continually refers to those who monitor hunts as “extremists“. Seed also likes the “boycott Lush for sponsoring hunt sabs” Facebook page, another campaign that has been pushed by the CA.

On top of this, Seed was once in charge of a hunt that was known to violently intimidate hunt saboteurs. When he was joint master and huntsman at Avon Vale, he said:

We have a policy of zero tolerance for antis [people who try to stop hunts]. If they step on private land, they will be nicked by our marshals.

During his time at Avon Vale, Seed was accused by witnesses on the ground as being violent. Wiltshire Hunt Sabs and Bath Hunt Saboteurs told The Canary:

When Seed was hunt master of the Avon Vale, from around 2000-2012, they were an exceptionally violent hunt. Sabs were often ridden at by Seed on his horse, and sabs were injured as a result of being sent flying by him. He had a hotline to his “Welsh militia” who he would call in to assault and abuse sabs and monitors on a routine basis.

In 2005, Avon Vale hunt stewards were arrested after attacking those attempting to monitor a hunt. At the time, the Hunt Saboteurs Association said:

Seed denies that he has been connected to any illegal acts or violence at hunts.

Seed said about his campaign the become PCC:

If I am elected I will expect the Chief Constable to police the countryside robustly and ensure that the laws are upheld.

But can we really trust that as PCC he will force the police to crack down on his daughter and his friends in the various hunts? The Canary also spoke to Kevin Blowe, coordinator for Network for Police Monitoring. Blowe explained what is expected of PCCs. He said:

Police and Crime Commissioners were created a decade ago to replace local police authorities and are elected to appoint and hold the Chief Constable to account for running the force. They therefore have considerable influence, which is why they are obliged to swear an “oath of impartiality” before taking office and to comply with the Nolan Principles for public office holders, including a commitment to ‘act and take decisions impartially’.

Voters in Wiltshire will need to decide whether Seed’s long association with organisations that have breached the Hunting Act is likely to make such impartiality impossible.

And Keep The Ban argues:

How are we to trust that Jonathan Seed will ensure legislation is adequately enforced when he has gone on record to say he is against said legislation?

No response from Seed

Local news sites have unquestioningly published an account by Seed, saying that he has received “death, rape and arson threats” since applying for the role of PCC. The Canary contacted Seed to ask him whether he had reported this to the police, or whether he had evidence of these threats. We asked him about his links to TiHUK, and about Larkhill Equestrian’s ties with the Royal Artillery Hunt, but received no reply. We also contacted TiHUK to ask if it wanted to comment about the leaked document of its meeting minutes, but again received no answer.

Isn’t it time you check out who your PCC candidate is, too?