Colombian police have killed civilians. British police have been training them regardless. - Canary 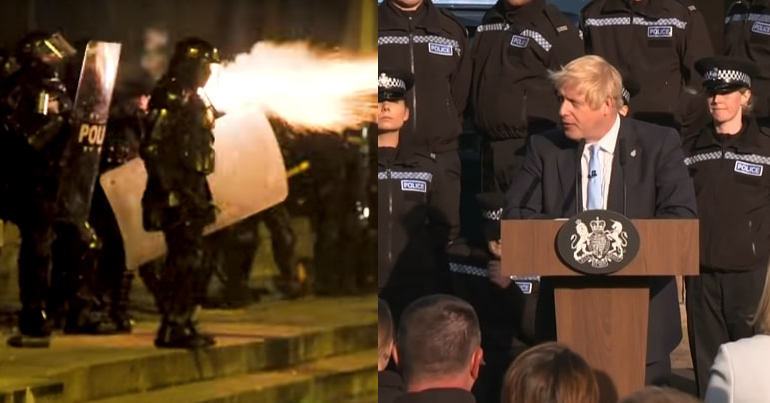 Correction: This article was corrected on 15 June 2021. The original headline of this article was “Colombian police are killing civilians. British police are training them.” The headline has been corrected to read: “Colombian police have killed civilians. British police have been training them regardless.” This is to better reflect the intended meaning of the headline which was that British police should not be training a police force known for its human rights abuses. As detailed in the article, in response to our Freedom of Information request, the College of Policing confirmed they had been training the Colombian police. However, they refused to disclose the nature of this training saying that to do so would “significantly reduce our ability to promote UK interests abroad” and be “prejudicial to the commercial interests of the College”. The image has also been changed to include a representation of both Colombian and British police forces.

Over recent days, the Colombian national police have killed a number of civilians protesting a proposed tax hike on basic goods. Many more civilians have been injured, and Colombia’s riot police reportedly sexually assaulted a woman.

Documents obtained by The Canary can reveal that the UK’s College of Policing has been training Colombian police over the past three years. This is despite Colombia being one of only 30 countries the Foreign, Commonwealth & Development Office (FCD) lists as “Human rights priority countries”.

Colombia’s unpopular president Iván Duque has been rocked by a national strike. The strike is in response to proposed tax hikes on everyday items. According to a recent poll, his disapproval rating has fallen to 69% – the lowest level since he was first elected in 2018.

Characteristically, the Colombian police, a long-time recipient of US and British assistance, have responded with grim brutality.

In a particularly disturbing video, a police officer in Colombia’s third largest city, Cali, is seen shooting a protester as he runs away. The protester died later.

According to documents obtained under the Freedom of Information Act (FOIA), the UK’s College of Policing has been training Colombian police. This has been happening over the past three consecutive years – 2018, 2019, and 2020. All of the training took place in Colombia.

The issue is of public concern in light of the UK government’s possible complicity in human rights abuses abroad. But the College has refused to disclose where exactly the training occurred, the nature of the training, and the cost.

In recent years, the College has come under fire for receiving millions of pounds to train repressive police regimes. These include Saudi Arabia, where the death penalty remains legal.

What’s more, the College insisted that it “can neither confirm nor deny whether the above information represents all the information held that would meet the terms of your request”, citing National Security concerns. To this end, the College absurdly claimed that it didn’t know how many Colombian police officers it had trained during 2018-2020. In response to an internal review, it was unable to offer even an estimate.

Given that Colombia is a resource-rich nation in a strategically valuable location, the UK’s current national objectives there can be deduced.

UK training is particularly concerning given the Colombian security forces’ longstanding links with paramilitary groups. These are groups that are responsible for the armed elimination of social organisations. Indeed, former Colombian president Álvaro Uribe, a key ally of the UK during Tony Blair’s tenure, publicly encouraged the violent crackdown of protesters.

Colombian human rights group INDEPAZ now estimates that 57 social leaders have been killed in 2021. That’s alongside 22 signatories to the government’s peace agreement with the FARC, formerly the country’s longest-running guerrilla insurgency.

Many of these police forces have been accused of torture and other abuses. They use their power to uphold brutal and repressive laws. The UK should not be collaborating with them or strengthening their authoritarian rule.

The killing of George Floyd and the repression that followed drew international attention to state violence. But it is not just an issue in the United States, it is happening all across the world. There must be an end to the hypocrisy and a full review of which police forces the UK has trained and if they have been responsible for human rights abuses.

The UK government’s apparent respect for human rights is at clear odds with its police training record.