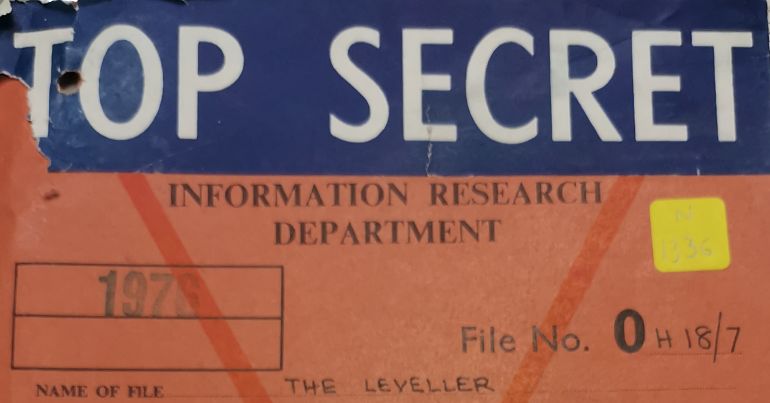 Though the IRD was part of the Foreign and Commonwealth Office (FCO), it also had a “Home Desk” which was tasked with domestic operations against individuals and organisations deemed threatening to British interests.

Recently declassified files show that the IRD considered covert “counter-action” against Granada’s World in Action series, collated a portfolio on its journalists, and used secret sources to monitor its activities abroad. It also secretly targeted the Morning Star newspaper by encouraging journalists to expose its sources of funding, and planned to produce a dossier on the newspaper with help from the Secret Service.

While this occurred within the context of the Cold War, there is little reason to believe such practices have ended.

World in Action was a hard-hitting, investigative journalism series produced by Granada Television between 1963 and 1998. The series broke a number of significant stories, including a campaign which led to the release of the Birmingham Six.

As journalist Phil Miller revealed in the Morning Star in 2019, MI5 spied on World in Action journalists during the 1960s, but found “no evidence of a [communist] conspiracy”.

Declassified files reveal that the IRD was also collecting information on World in Action, and “considered taking counter-action as early as 1975” in response to a series of programmes on the CIA. An adviser to the series was former CIA officer and whistle-blower Philip Agee, who the IRD had been trying to associate with “foreign orchestrators” in order to discourage “liberal adherents” from opposing his extradition to the US. (There are remarkable parallels here with the attempt to link Julian Assange with Russia).

The IRD’s proposed “counter-action” against World in Action would have involved a “hatchet job” on the programme with “a provisional crime-sheet of errors” attributed to journalists Gus MacDonald, David Boulton, and Gavin MacFadyen. Such journalists were described within the files as “extremists”.

In late 1976, World in Action was producing a documentary about child labour in the toy industry in Hong Kong, a British colony. During this time, a “highly delicate source” provided intelligence to the IRD about World in Action’s activities. MacFadyen and another journalist had “lain very low and kept completely clear of Government”, IRD was told, and “a camera crew has now arrived and clandestine filming will probably start soon”.

IRD planners expected the film to be embarrassing for the Hong Kong authorities, and considered launching a series of counter-measures against the news organisation in retaliation.

In preparation for the documentary’s release, an official at Government House in Hong Kong noted that “we are intensifying action against child labour, particularly in toy factories, as a precautionary measure”.

In a more sinister move, the IRD compiled a report on MacFadyen which contained a list of allegations regarding “questionable investigative methods” and “apparent political bias”, while other IRD officials discussed instigating “a feature article” with damning information about “how “World in Action” operate”. An official at the FCO’s Hong Kong Department noted that “we might try to stop the broadcast of the programme”.

Such measures were apparently rejected, but not because the covert targeting of journalists was deemed anti-democratic. IRD planners noted that the documentary on Hong Kong did not seem to “provoke any significant public reaction”, and the department therefore did not want to “stimulate increased public interest in the programme”.

The IRD ultimately decided to add the information it had acquired “to the dossier which has been accumulated on ‘World in Action’ over the years in the hope that there will be an opportunity in the future to use this material more effectively”. 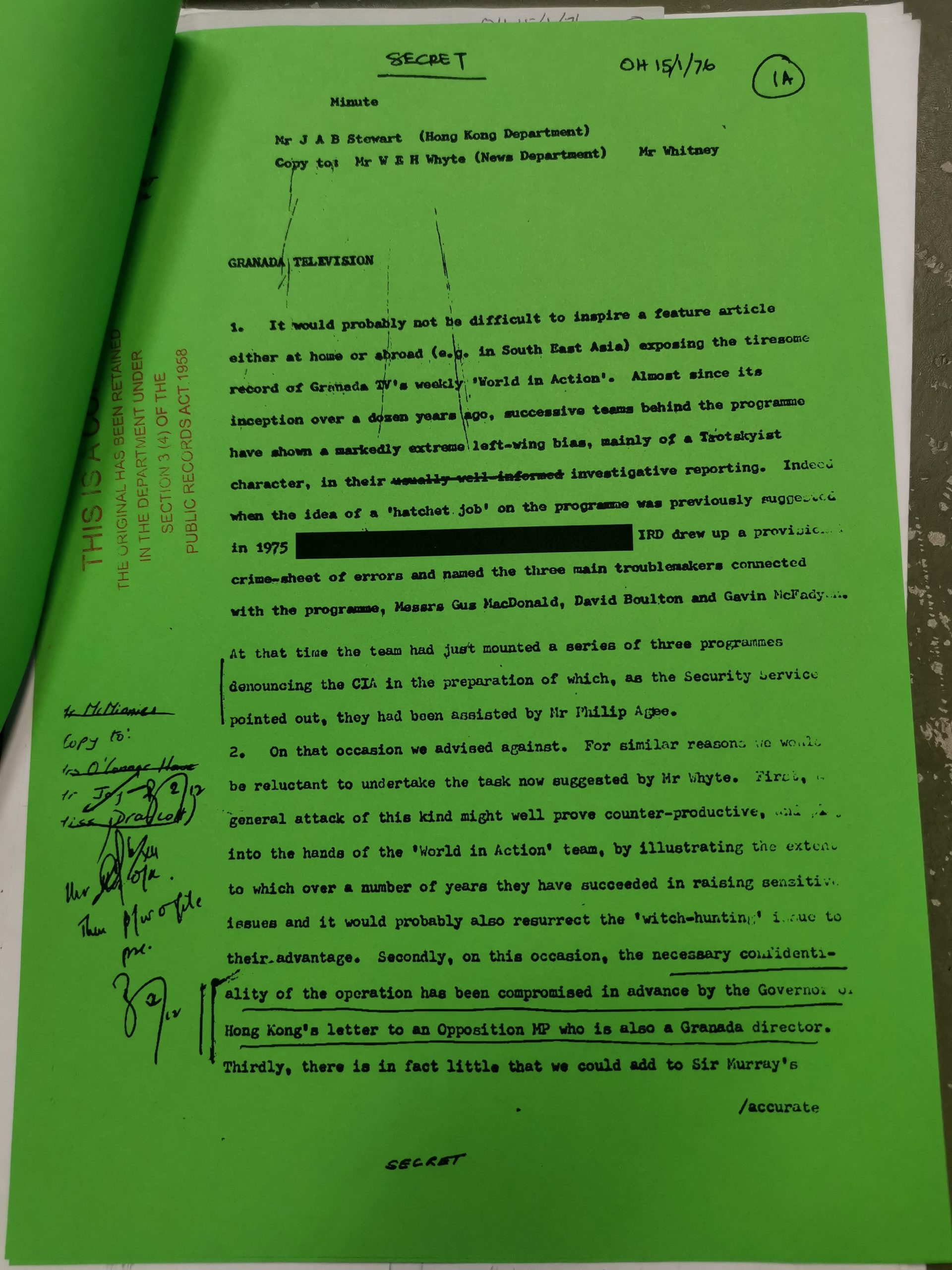 The creation of radical investigative magazine The Leveller in 1976 was also met by IRD planners with consternation.

During the latter decades of the Cold War, the Morning Star survived financially through a combination of newspaper sales and Soviet patronage. This involved thousands of copies of the Morning Star being bought each day by the Soviet Union and flown to Moscow.

In 1975, IRD planners discussed a secret report on the “Financing of the Morning Star”.

The report noted how the IRD had tried to “interest the British press in the fact that the USSR and East European countries take more than 12,000 copies per day” of the Morning Star. It added that the newspaper “manages to defy the economic forces which have caused grave financial difficulties for most of the British press”, adding to the suspicion that it was receiving covert funding from the Soviet Union.

The report continued that: “While watertight evidence is no doubt lacking, it might be possible for a skilled propagandist to present a convincing case which the CPGB [Communist Party of Great Britain] would find extremely difficult to refute. The project would require some detailed research which IRD could no doubt undertake in conjunction with the Security Service” – namely MI5.

Such research “would have a damaging effect on the CPGB, for whom the ‘Morning Star’ is an immensely important propaganda vehicle”.

In April 1975, IRD official H.P. Kóa added that “we have been trying to expose over many years” the financing of the Morning Star “without much success”. He added:

We believe that Fleet Street as a whole is quite aware of the situation; nevertheless, we have of course come up against a curious reluctance on the part of journalists to attack a newspaper even if it is an organ of the CPGB.

Ben Chacko, the editor of the Morning Star, commented on the revelations:

Given what we know of the secret state’s extensive surveillance and sabotage of entirely legal protest movements and trade unions, it is no surprise that British spooks also wanted to undermine the Morning Star.

Trying to discredit the newspaper with claims it must have had access to secret foreign funding run up against the fact that the Morning Star was not just the most authoritative source on industrial relations in the British press – prime ministers from Winston Churchill to Margaret Thatcher made sure to obtain their copy – but a daily newspaper whose integrity and professionalism was respected by other journalists, as the spooks evidently found to their dismay!

This is a cautionary tale about the state’s willingness to play dirty to discredit critical media. It is absolutely relevant today, given the calls we hear from both main parties in Parliament for tighter censorship, bans on foreign-owned media like China Central Television or Russia Today, and for state regulation of so-called “fake news” that conveniently ignores the barrage of fake news pumped out by Establishment media day in, day out.

We must acknowledge the importance of defending free speech and the right to “publish and be damned!” as our government connives at efforts to intimidate and jail journalists such as Julian Assange.

These files demonstrate how the British state secretly compiled intelligence and made plans to target news organisations during the Cold War.

Though the Cold War between the Western capitalist nations and the Soviet Union is over, there is little reason to believe that such covert practices have ended. Indeed, wide evidence has recently emerged about the Cabinet Office’s draconian measures against news gathering, bizarre levels of data collection on journalists, and political campaigns to shut down independent media. The British government has also continued to regard journalists as “domestic extremists”.

At the time of publication, the Foreign, Commonwealth and Development Office had not responded to questions about whether it still engages in this activity.