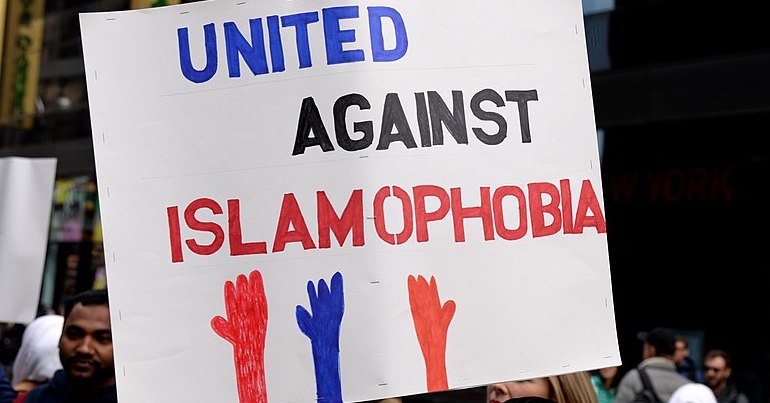 A freedom of information (FOI) response has shown that the Home Office spent £209.3m on the Prevent programme between 2010 and 2021. However, there’s much more that lurks behind this figure.

Prevent Watch has organised the People’s Review of Prevent in response to a boycott of the Shawcross review. The Shawcross review looks at the implementation of Prevent and aims to provide recommendations for the future. It’s led by William Shawcross, a member of the Henry Jackson Society, who has expressed “patently Islamophobic views”. A number of organisations have pledged to boycott the review.

That’s exactly why Prevent Watch has taken up its own review. You can read its full report here. It includes analysis of why and how Prevent is Islamophobic, along with a number of case studies from parents, children, and others whom Prevent has targeted.

How did Prevent Watch get these numbers?

Prevent Watch shared its FOI request that it sent to the Home Office with The Canary. Among other things, it asked for a breakdown of Prevent’s budget. The Home Office gave the following information: 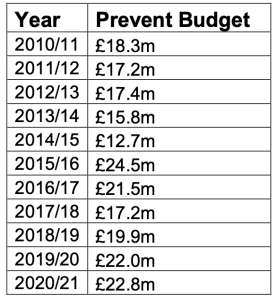 those 44 who were [a Priority Prevent Area] would have received additional Prevent funding as part of their budget. This tactic of sending people on wild goose chases to get FOIs is not unique when other researchers have tried to gain some transparency about Prevent – be it funding or operational aspects.

As The Canary has now covered repeatedly, it can be very difficult to get much information from the FOI process. Aitlhadj said “the FOI programme is only fit for purpose if the authorities are made accountable when they fail to deliver”. She added:

and even where complaints are made to the ICO this does not seem to serve as a deterrent for this opaque behaviour.

Where has all this money gone?

As the People’s Review of Prevent shows, there are many cases where people have been referred to Prevent only to feel targeted, isolated, and under suspicion.

The report includes a number of cases of people referred to Prevent. These include:

Aitlhadj explains that in the cases where referrals lead to proposed action:

She goes on to emphasise how funding for social and health services gets diverted to Prevent. This ultimately causes further harm to the communities that are under scrutiny:

Prevent causes genuine support that could be provided to go around in a huge loop that creates jobs for those pushing Prevent but means that the end service required is short of all the cash it could have had if the unnecessary middle steps were omitted.

As the People’s Review of Prevent argues, Prevent targets Muslims and positions us as the enemies within. Children, vulnerable people, and many others are seen as suspicious. As the FOI shows, this takes a huge amount of  public money. That’s money which could otherwise be spent on welfare, social care, education, health, and community projects.

Aitlhadj goes on to say:

The millions injected into Prevent started when the austerity measures also started. Genuine community projects eventually had their money dependent on their engagement with Prevent. The money needs to be pumped back into communities but without the lens of security or any strings attached.

Yet another factor that emerges in this review of Prevent is the issue of pre-crime. As The Canary’s previous work shows, pre-crime is sometimes known as predictive policing. It often uses data to predict areas where crime may occur in order to redirect police energies.

The People’s Review of Prevent makes it clear that Prevent is firmly within the category of pre-crime:

We need to reiterate that Prevent operates in the pre-crime space, where no offences have been committed and where the information gathered is, at best, an indication of a potential risk of an offence being committed at some considerable point in the future.

At its core, Prevent is about targeting Muslims who, in the future, may or may not commit crimes. Aitlhadj told The Canary:

Pre-crime has been conflated with actual policing and even with preventative policing and it is essential that awareness is raised to demonstrate that pre-crime is an arena of absolutely no crime intended or even in the making nor is it based on correlations or any real science.

This, according to Aitlhadj, has serious consequences for the people and communities targeted by Prevent:

As policing strategies more generally move towards using data and algorithms to make assumptions, it is worrying that there is a huge influx of data, particularly of children’s data that could potentially be used in such a manner… what is happening to the information gathered and retained of the thousands of children referred every year to Prevent who, by Prevent’s own logic, are not even suspected criminals? Why is it retained on several databases controlled by police and how is it being used?

In other words, it’s crucial to understand Prevent as pre-crime precisely because the data it gathers, often on children, is self-sustaining. Prevent exists to work out which Muslims to be suspicious of – it has never been a question for the government that suspicion of Muslims is necessary – and it exists in order to collect information on Muslims. Then, regardless of whether referrals actually stop any crimes, they provide themselves with their own data to justify the continued existence of Prevent. In other words, Prevent is a surveillance tool more than it is a security tool.

Aitlhadj also told The Canary that the issue of national security is one of mistrust:

There is deep mistrust towards the Government when it comes to matters of national security and this is not based on paranoia. It is based on past experience and on their past reviews, from race to security, they have failed to deliver independent scrutiny.

It remains to be seen how, if at all, the Shawcross review will justify the huge amounts of money spent on Prevent. What is known, however, is that rights organisations from Amnesty International to Liberty have come together to boycott the Shawcross review. Many more Muslims have spoken out about the damage Prevent has done to our communities.

All the more reason to take the conclusions of the People’s Review of Prevent with the vital insight it provides: a government that won’t spend money helping people is happy to waste it on surveilling children.

Featured image via Wikimedia Commons/Felton Davis cropped to 770×403 pixels, licensed under CC by 2.0