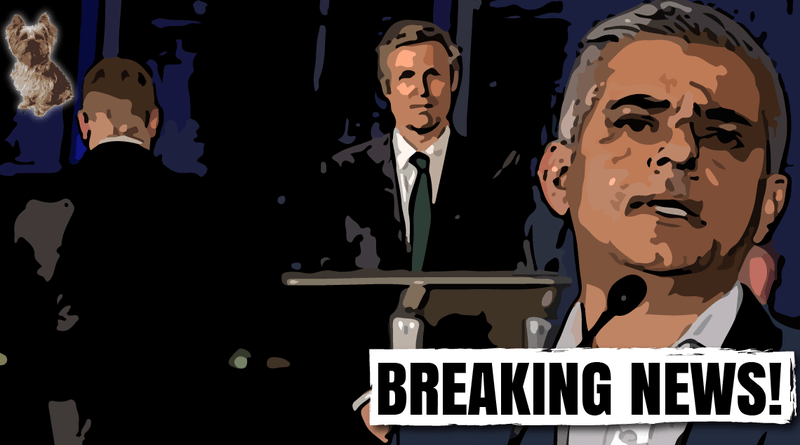 THIS POST IS SATIRICAL. It is republished here with permission by authors at The Hourly Terrier, go check out the rest of their awesome work when you’re done.

When people saw Paul Golding turning his back on the victorious Sadiq Khan, many assumed that it was a feeble display of dissent – like an infant throwing his toys out of the pram because he’s been asked to stop being such a little sh*t.

Others thought that this was Britain First turning their back on London in the same fashion that London has turned their back on them – Britain First having accrued somewhat less than 1% of the vote – around about the same amount that the BNP got – i.e. the primordial soup that Golding’s group had supposedly evolved from.

The problem with this assertion is that London haven’t turned their back on Britain First, because London were never facing them in the first place. Although they have of course been a lightning rod of revulsion and cheap jokes since their inception, they’ve always been the far-right equivalent of the Monster Raving Loony party – albeit with a less coherent manifesto and sillier looking candidates.

What actually caused Paul to turn his back on Sadiq yesterday was that he was so crushed by the crushing weight of his crushing defeat that his orifices just burst forth from the strain of it – burst from the thought of it – his eyes p*ssing tears, his nose gushing nose slush, and his trouser-bound ‘little Paulie’ spurting wee like a busted sprinkler.

Zac Goldsmith allegedly thought that Paul was saying “Zaccy,” but when he asked the sobbing Paul if he was talking to him, the failed politico said, “I was saying ‘mummy,’ you posh wally.”

The fact that Paul had made such a mess of himself meant that he was unable to turn around all night – and in fact is still there – just waiting for the circling paparazzi to leave – waiting for his eyes to stop leaking – waiting for the people of London to finally start respecting him.

He may be there for some time.

Featured Image via The Hourly Terrier