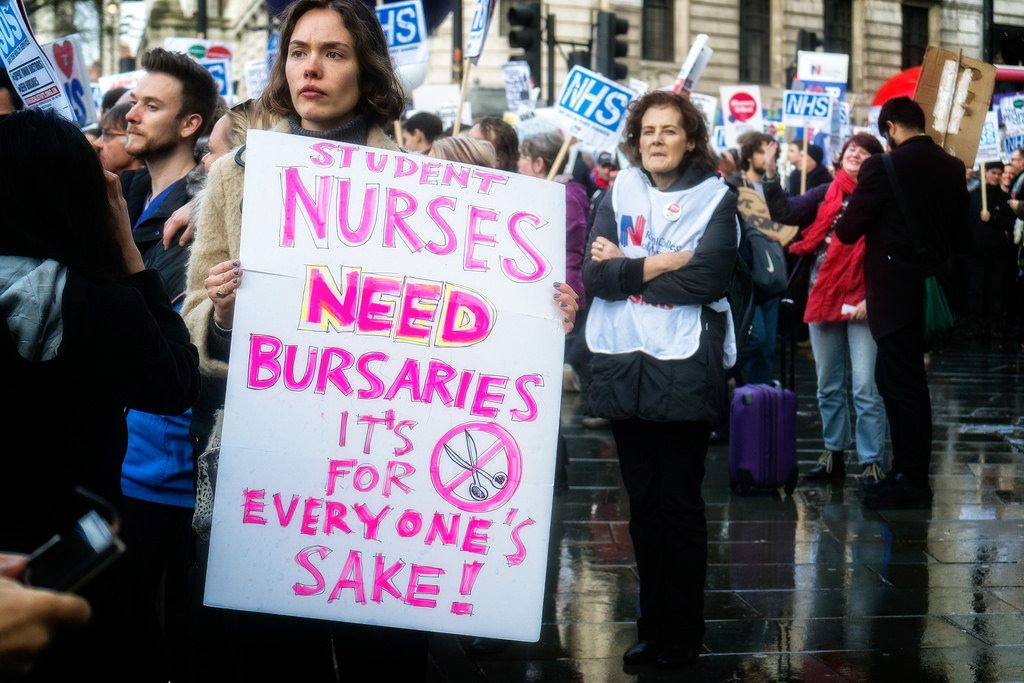 Jeremy Hunt, Secretary of State for Health, probably has a lot of letters to read on a Monday. There may be a few surrounding the current debacle over the junior doctor’s contract, as talks between the Department of Health and the British Medical Association are set to resume today.

But one that he may wish to read with interest has been penned by a group of nurses currently campaigning to save the student bursary.

As The Canary reported last week, a petition which gathered over 160,000 signatures was debated in parliament over the proposed abolition of the bursary scheme. During the session, Mr Hunt appeared less than interested in the course of the discussion and was given a ticking-off by the Speaker, John Bercow.

However the debate proved to no avail and the stripping of the bursary (worth around £6,500 a year to students) and its replacement with the standard student loan system is still going ahead.

As we said on Thursday

The government argues this will save the taxpayer around £826m a year (the majority of a bursary is non-repayable by the student) and help it create an additional 10,000 training places in five years. Campaigners against this move say it is saddling students with debt they cannot afford (the starting salary for a nurse is around £21,000) and will impair recruitment and retention by putting people off joining the profession. Furthermore, this comes at a time when these NHS staff have already been hit with a freeze on pay increases of just 1% per annum.

Not that the Health Secretary seems concerned. He may, however, wish to reconsider his position once this letter drops into his email today.

Following the bursary debate in parliament last week and observing how interested you were in your phone (as opposed to the future workforce of the NHS, of which you are our Health Secretary) we would like to cordially invite you to speak at our march against the NHS bursary cuts on Saturday 4th June.

We know how much you value evidence based statistics and data so we’re confident you will be able to provide a rousing speech which will tell everyone how terrible bursary cuts are for the future workforce. One particular aspect of rolling out the loan system instead of providing NHS bursaries is that there actually is no evidence whatsoever to support this. Unfortunately, your colleagues have simply decided that prospective students should pay to work and if they cannot afford it and want to be a nurse, they can be an apprentice for just £3.30 an hour.

This would mean that the NHS workforce will lose out on the rich diversity that bursaries provide because single parents, mature students, those with families and those from poorer backgrounds will not be able to afford to train because of the crippling student debt – estimated to be over £50,000.

Instead, if they want to be a nurse they can work for a pittance to achieve a lesser qualification then their degree-educated peers but probably end up with the same responsibilities, or simply give up on their dream and passion to be a healthcare professional. I am sure you would agree that this is incredibly unfair and unjust.

We know that you are against unfair impositions and would happily listen to NHS students who can articulate why the bursary cuts are a very poor choice and need to reinstated by 2017 when they are due to be abolished. The NHS workforce will be in grave danger should the loan system be imposed.

We very much look forward to your response and marching with you on the 4th of June. We assemble at St Thomas’ Hospital, 1pm. Please bring your NHS badge and a placard of choice.

Danielle, Charli, Anthony, Andy, Jenny, Sami, Katherine and the rest of the Bursary or Bust team.

Whether Mr Hunt takes up these student nurses’ kind offer remains to be seen, but as student nurse and Bursary or Bust organiser Danielle Tiplady told The Canary

Jeremy Hunt has repeatedly ignored or declined to meet NHS students since the government cut bursaries in November. As our Health Secretary he has also remained silent on the issue. Even in the bursary debate last week he did not speak. For Jeremy Hunt to come to the demo and march with us would give both him and NHS students the opportunity to share opinions and experiences.

Let’s hope he listens to these plucky nurses more than he does the junior doctors. Although it is highly unlikely the embattled health secretary will listen to either.

“Falling on deaf ears” is a phrase quickly becoming most apt for Jeremy Hunt.

A portion of the writer’s fee for this article will be going to the Bursary or Bust campaign fund.

Write to Jeremy Hunt yourself.