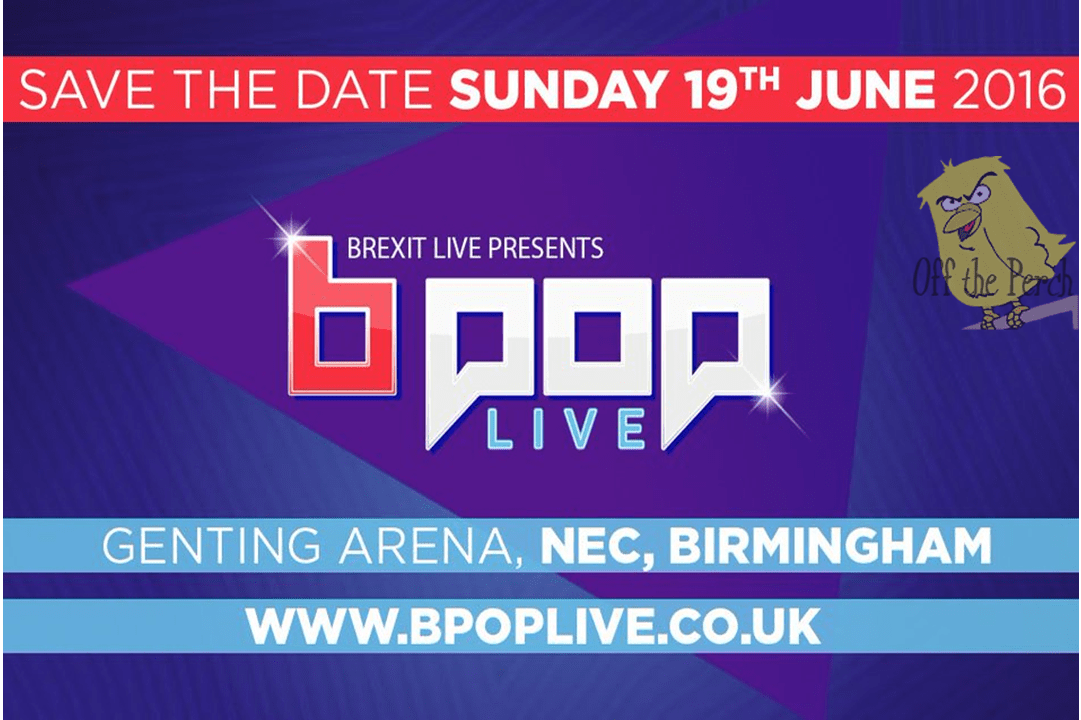 Some of the biggest names in the music industry are preparing to make sweet love to your ears on 19 June as part of Leave.EU’s much-awaited concert: BPop Live. And now, Off the Perch can proudly reveal some of the giants who will be gracing the stage, along with news of an exciting rival event organised by the Remain camp.

The concert’s current headliners will be three quarters of Bucks Fizz – the winners of the 1981 Eurovision Song Contest – along with one of the Drifters, an Elvis impersonator and household name Alexander O’Neal – the American soul artist who’s appeared on Celebrity Big Brother, Weakest Link and Wife Swap. For just £23 (plus booking fee), you can see these amazing entertainers share the stage with UKIP’s Nigel Farage and not-at-all-disgraced Tory MP Liam Fox!

But that’s not all!

A little Brexit birdie has told Off the Perch that there are a number of other artists waiting in the wings, and we can now reveal just a few of the names that will be taking BPop Live by storm later this month.

BPop Live has been “endorsed” by Leave.EU, which is a pro-Brexit group co-founded by Arron Banks – a millionaire businessman and UKIP’s biggest donor. Banks has previously made it clear that he would love to privatise the NHS.

But those who’ve bought tickets already needn’t worry! An illustrious list of music legends is preparing to fill the vacuum.

The new line-up, shared exclusively with Off the Perch, is as follows:

The unending wealth of talent which will be on display at Bpop Live hasn’t convinced everyone that leaving the EU is a good idea. But it has convinced some Remainers that a rival concert would be a brilliant idea.

One Remain camp insider recently reminded Off the Perch that:

We probably wouldn’t have been blessed with the likes of Agadoo, Bombalurina, and Fast Food Rockers had it not been for the inspiration these musical pioneers got from their counterparts over in Europe.

The anonymous campaigner hinted that David Cameron’s Remain team is now considering putting on its own “Epop Live”. This concert, he said, would bring together the cream of European music.

Off the Perch can now reveal some of the performers that Cameron and co have lined up for this extravaganza:

Whichever concert citizens attend, such musical talent has rarely shared the same stage in Britain. So whether it’s Elvis impersonators or a good dose of Europop that tickle your fancy, one thing is for sure – the EU referendum is finally getting interesting!