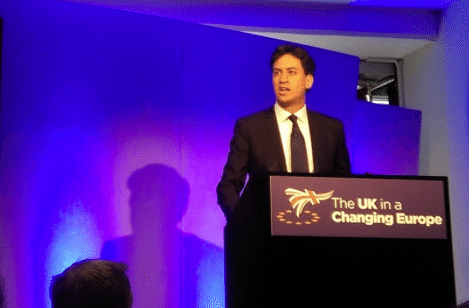 Former Labour leader Ed Miliband today accused the Leave campaign which favours a Britain out of the European Union, of committing a “fraud on the British people.”

Mr Miliband has joined forces with current Labour leader Jeremy Corbyn for a final push in hopes of swinging the Labour vote toward Remain. Miliband stated today that in his view, the Brexit campaign is luring in working class voters with promises of action on immigration – while the real plan is to shaft them later by scrapping key rights and protections for working people.

In a fiery keynote speech to UK in a Changing Europe on Friday morning, Miliband described the “bleak future” facing British workers in the event that we leave the EU. He told the assembled audience:

The Leave campaign are trying to perpetrate what I can only describe as a fraud on the British people. Tories who in the last days of this contest are trying to disguise themselves in Labour clothes.

Let’s be clear what the Leave agenda would mean for working people. They want out of Europe so we can be out of the social chapter, as Boris Johnson said in terms in 2012. Their competitiveness strategy for Britain is deregulation and the erosion of rights of working people.

Miliband also poked fun at the Leave campaign’s sudden focus on the NHS.

“Michael Gove now wants to save the NHS from Jeremy hunt and David Cameron!” he joked.

The speech reverberated far outside the room in which it was made, trending on Twitter for three hours at time of writing.

Meanwhile, Yvette Cooper released her Britain Stronger In Europe report which predicts the far right making significant in-roads in Labour heartlands in the event of Brexit. Cooper argues that a post-Brexit recession coupled with accelerated ‘austerity’ measures and weakening of worker’s rights will create a potent cocktail of resentment, ripe for exploitation by far right groups. She says:

Britain is at risk of being taken over by the far right of the Conservative Party, and Labour communities will be the victims.

Boris’s Brexit Britain would see rising unemployment, workers’ rights cut and the NHS cut back, and Labour families and communities would suffer most. That is the real risk of a Leave vote.

As both sides increasingly up the ante with ever more dire threats about the consequence of voting either way in the EU referendum, it’s all the more important for voters to turn to independent sources for their information. This is not a vote which should be made out of fear or resentment. Instead, each person’s vote should be a considered statement of evidence, conscience and principle.