Tony Blair launches a bitter attack on Jeremy Corbyn, but one line gives the game away (VIDEO) - The Canary 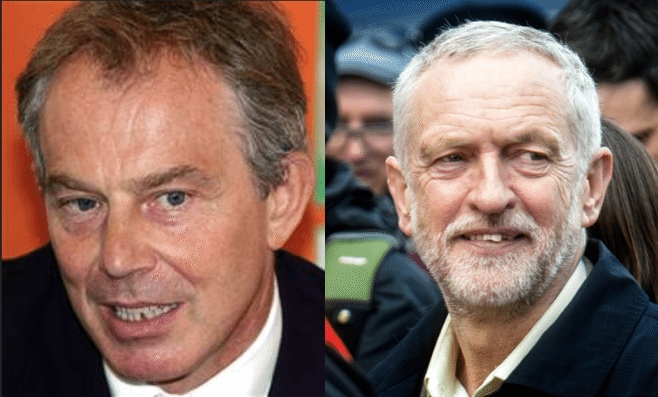 Tony Blair launched a withering attack on Jeremy Corbyn today in which he railed against his reluctance to go to war in Syria, and implied he would be more dangerous in power than Donald Trump. But buried among the accusations was a single line which seemed to evoke the real bitterness at the heart of Blair’s attacks – Corbyn is today’s man, and Blair is done.

As the Chilcot Report release date closes in, as does the moment Blair begins to face the real consequences of his actions – the former Labour leader and Prime Minister has gone on the offensive. Blair’s normally skillful oratory however, seems to have been overshadowed by his own bitterness. This sentence epitomises this:

“I’m accused of being a war criminal for removing Saddam Hussein – who, by the way, was a war criminal – and yet Jeremy is seen as a progressive icon as we stand by and watch the people of Syria barrel-bombed, beaten and starved into submission and do nothing,” Blair said.

He continued, hitting out at the protesters who called him to account:

“There’s a guy whose face is on the placard,”

What Blair is most angry about, is that he has lost control of the narrative. While this speech may anger those who are pleased to see the back of Blairism – they should instead celebrate. This is as close to an admission of defeat as you will ever see from Tony Blair.

He has been reduced to undignified snipes from the sidelines – while the conversation has moved on, and out of his formerly vice-like grip.

Remember the march to war in Iraq? The growing sense of horror as US Generals promised ‘Shock and Awe’ as if they were talking about the world’s greatest fireworks display, and not the obliteration of civilian populated cities, towns and village. Almost every news channel almost every hour was telling the public of the US and the UK that Iraq was literally on the verge of pushing the button on a nuclear or biological weapon. Despite UN inspectors urging caution, we were told the government had information we were not privy to and we needed to trust them and let them get on with the hard work of saving the world. This is what it looked like:

It was relentless. If you were opposed to attacking Iraq you were deemed to be some kind of hippie ‘peace at any price’ traitor. Donald Rumsfeld, the then US Secretary for Defence, likened opponents of a pre-emptive strike on Iraq to the appeasers of Hitler ahead of World War II.

All who suggested this war was more about resources, profit and geopolitics than defence or democracy, were dismissed (by even the supposedly moderate General Colin Powell) as loonies and conspiracy theorists.

The entire media sang with one pro-war voice, and to stand against it didn’t feel cool or trendy – it felt lonely, and futile.

Upwards of a million people marched on London and other UK cities over a number of weeks, over and over again to say NO. I recall the atmosphere as generally upbeat and determined. We thought we were going to stop this attack. We believed that with such enormous numbers represented on the streets, the government would heed our call and turn back. We were wrong. Weeks later, the attack commenced.

The sense of powerlessness was overwhelming. Those of us who saw this war as a mistake felt overpowered by Blair and his ability to shape the story his way. But in the intervening years, the truth has slowly crept out.

We discovered no weapons of a biological or nuclear nature or facilities to produce them. None.

We discovered the supposed evidence, supplied by the UK government to the US government and instrumental in building the case for war, was fake. The so called ‘Dodgy Dossier’ weaved together pieces of a PhD thesis found online together with other unvalidated, tenuous information. The language of intelligence was altered to suggest a serious and imminent threat. During one of the many fruitless Iraq inquiries Major General Michael Laurie said:

“We knew at the time that the purpose of the dossier was precisely to make a case for war, rather than setting out the available intelligence, and that to make the best out of sparse and inconclusive intelligence the wording was developed with care.”

The government made the decision to go to war and then scrambled to procure ‘evidence’ to support its decision, rather than base its decisions on the evidence.

We discovered during the Leveson Inquiry into Media Ethics that Blair’s biggest cheerleaders – the Murdoch press – had been meeting with Blair throughout the pre-war period to synchronise their messaging to the public.

We discovered the price in human lives of this folly. First, Dr David Kelly. Then, according to the  internationally recognised Iraq Body Count, between 159,079 and 177,863 Iraqi civilians have died since combat began in 2003.

We discovered the geopolitical costs too. The entire region is aflame with the consequences of this ill-considered colonial enterprise. Afghanistan, Syria, Libya, Yemen, Pakistan – all are facing the twin threat of drone strikes from the continued War on Terror, and ISIS.

In 2003, 70% of the public backed the invasion of Iraq and 30% opposed – according to YouGov Polls. But since then, approval for the war has dropped off to just 26%. What’s more, people today are inclined to say they were against the war at the time (even though this is clearly untrue). This gives a signal as to just how toxic the legacy of Iraq is politically in 2016.

This is Blair’s legacy. He has long stated that the history books (and God) would vindicate him, and view him more kindly than his contemporary opposition. Instead, he is likely to end his days as a war criminal by name, and perhaps by formal charge if Chilcot has any teeth.

Blair lost. He lost on Iraq, and now he is losing on domestic policy too. His power over the Labour party and the public is fizzling away. And so his mean-spirited and bitter assault on the man who is reshaping the party and perhaps one day the country in a new, progressive mold – should be seen for what it is. Simply the dying ‘King Lear’ style gasps on of an embittered man who tasted power, became drunk on it, and lost his way.