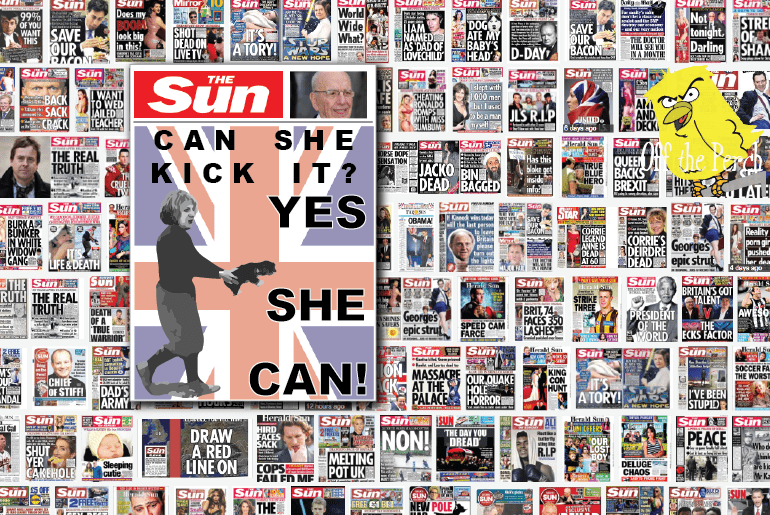 Newly appointed UK prime minister Theresa May was praised for her “strong leadership” today after kicking a puppy in the face while visiting a community play centre in Nibley.

May’s visit to the Hope and Joy community play centre was controversial from the start. The centre had only reopened due to the success of a crowdfunding campaign, after the Conservative government scrapped the support grant on which the project relied. May’s team were on high alert for locals who might make a statement that would embarrass the new prime minister.

The 10-week-old Havanese puppy, whom locals named as ‘Wishbone’, strayed from its owner as May inspected a dried pasta collage of her own face. As Wishbone sniffed her shoe, the prime minister pulled back her foot as if about to take a penalty, and fully kicked the puppy in the face – launching him clean into the sky. At the time of writing, search attempts for the puppy have been fruitless. Speaking to Off The Perch, Grace Apple – who had just received ‘Wishbone’ as a 12th birthday present, said:

“The prime minister just kicked my puppy into space!”

Miss Apple then ran crying to her mother, who was also weeping and pointing helplessly to the sky.

May’s flagrant animal abuse was greeted with rapture by the media and political classes, who praised her “toughness” and “strong leadership”. The Sun ran the headline “Can she kick it? Yes she can!” – with an image of Wishbone being launched from the prime minister’s shoe, while Buzzfeed ran a piece entitled “21 times Jeremy Corbyn could have kicked a puppy in the face but didn’t. The lefty wimp.”

Off The Perch sat down with the political editor of Buzzfeed, Tim Plasterdump, to find out why his media outlet was backing May .

OTP: So Tim, why would you and Buzzfeed back the prime minister when she just committed an act of animal cruelty on live television?

TP: I think you’ve really lost sight of the wider political landscape here. Britain is in crisis. We’re facing Brexit and the resulting economic and political fallout. We’ve got a rising right-wing movement. We’ve got these Corbynistas running around all over the place smashing windows and –

OTP – Hang on, we know that claim about the windows was a lie.

TP: Details, details. The point is, the country needs strong leadership. We’re crying out for a tough, no nonsense leader to bring the country together in this most uncertain time.

OTP: By kicking a puppy in the face?

TP: You know, it’s easy to sit there and criticise from the comfort of opposition. But actually having to make the decisions from the highest office in the land is very different. This is what Corbyn’s lot just don’t get. We managed to find at least 20 times your glorious leader could have kicked a puppy in the face but didn’t…I mean, if that doesn’t tell you all you need to know about his lack of leadership, I don’t know what would.

OTP: What is it about kicking a puppy in the face which demonstrates positive leadership skills?

TP: I cannot believe I am even having to answer this question. This is the problem with the loony left today. No clue about realpolitik whatsoever. It’s all yoga and yoghurt-knitting with you people isn’t it?! Sometimes, you just need to kick a puppy in the face – and I want a leader who has the toughness to do it without a moment’s hesitation or regret.

OTP: Is there any act of wanton violence or murder that you would view in a negative light from the prime minister right now?

TP: I don’t understand the question.

OTP: I’m saying, are you just going to celebrate every cruel act by this PM as some sort of victory of courage?

TP: I’m not going to get into all the hypotheticals now. Let’s just…

OTP: What if she crushed a swan’s neck with her bare hands?

OTP: What about deliberately sitting on a kitten?

TP: That’s not really the –

OTP: Stealing a child’s ice cream and eating it right in front of their face?

TP: Look. Enough. This is ridiculous.

OTP: Yes, yes it is. Because none of these acts would demonstrate anything expect the cruelty and inhumanity of the person committing them – would they?

Tim Plasterdump chose to terminate the interview at this point. Within the hour, Buzzfeed had published a piece entitled: “15 reasons Off The Perch is a super-stupid Corbynista rag unworthy of serving as toilet paper”.