A woman calls LBC radio and lets rip on this fat cat boss, she may become a national hero (AUDIO) - Canary 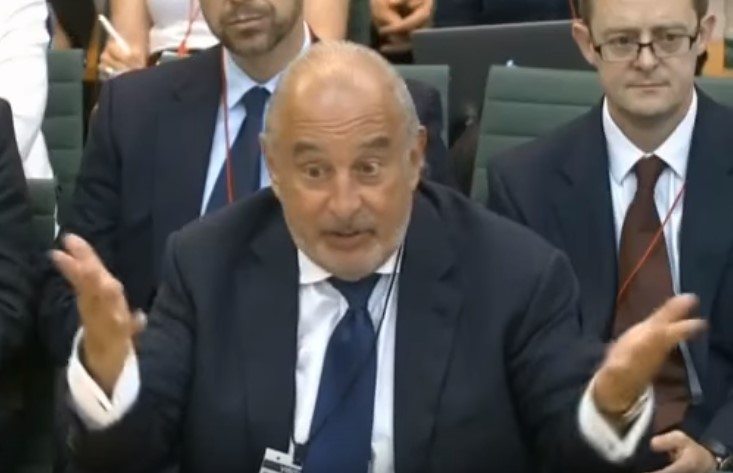 As high street retailer, British Home Stores (BHS), collapsed on Monday, potentially creating over 5,000 job losses. A female caller to LBC radio in the subject might end up a national hero after giving her views on the matter.

Speaking on July 24, “Marie”, whose daughter works at BHS, tore into Sir Philip Green, the retailer’s former owner. She starkly highlighted the human cost of what MP’s described as Green’s “systematic plunder” of the former retail giant:

How the hell does he think all them staff are feeling? One 62 year old woman is the sole person is earning any money and her husband is not well and she’s living in a rented accommodation. She’s going to be chucked out in two months. And this idiot […] What is going to happen to him?

You can hear the full call from “Marie” below:

The question of what exactly is going to happen to “idiot” Green is at the forefront of the chaos engulfing him and his retail empire. A joint report by the work and pensions select committee and the business, innovation and skills (BIS) committee didn’t mince its words in laying the blame firmly at the retail moguls door.

The report calls the demise of BHS a “tragedy”, labelling Green’s management of the business “the unacceptable face of capitalism” and saying there was “little to support the reputation for retail business acumen for which he received his knighthood”. Frank Field MP, chair of the work and pensions select committee went further, saying:

[Green’s] reputation as the king of retail lies in the ruins of BHS. His family took out of BHS and Arcadia a fortune beyond the dreams of avarice and he’s still to make good his boast of ‘fixing’ the pension fund. What kind of man is it who can count his fortune in billions but does not know what decent behaviour is?

Indeed, “decent behaviour” appeared to be sorely lacking throughout the saga of BHS’ demise, but scrutiny should not be limited to just Green. Questions have to be asked about how one of the richest and most prolific businessmen in the UK managed to annihilate one of the country’s most recognised brands. All while Her Majesty’s Revenue and Customs (HMRC) and Companies House, the two agencies responsible for the activities of corporations, looked on, seemingly bewildered.

During his tenure at the helm of BHS, Green siphoned-off over £400m in dividends (portions of BHS’ earnings) to his wife Tina, who is domiciled in the tax haven of Monaco. Around £200m of this money was then loaned back to one of Green’s subsidiary companies, Taveta, with an APR of 8%. These funds were then, in turn, used to assist in the sale of BHS from one of Green’s companies to another.

Effectively, Green and his wife were making money by lending BHS its own cash back to it. And making money they were, as in 2015 Mrs Green earned £8.3m in interest on the loan, on top of the £20m repayment. They were, in essence, offering BHS a cigarette out of its own packet.

Furthermore, Green sold BHS in March 2015 for just £1 to serial bankrupt Dominic Chappell. Chappell then went on to take £4.1m from the company for personal reasons in the space of just 13 months. As the select committee’s report described, he “had his hands in the till” while investing no money in the company.

And all of this was going on, under the apparent watchful eye of HMRC and Companies House.

How a major retailer can have hundreds of millions of pounds extracted from it for the personal gain of its owners, without any questions being asked by the relevant authorities who have oversight, beggars belief. While Green was lining his own pockets in 2009, BHS was running at a £450m loss – something which both HMRC and Companies House would have known.

Yet, these agencies stood by and did nothing. As Marie said in her LBC interview:

It’s going to carry on. You know what I call it? Speed and greed […] Bit by bit, they’re just getting fatter and fatter, and richer and richer. And the idiot that bought it, the minute he came in they [the management and authorities] all knew it was one big shaft. And what happens? Nothing. Not until it’s all over then it all comes out. Everybody knew about it, but don’t let’s talk about it, because of loopholes […] and what will happen to him and that idiot that bought it? Nothing.

In light of events, serious questions need to be asked of just how effective both HMRC and Companies House are. The MP’s report says that:

Some of the failures which allowed this to happen are not unique to BHS. Its lessons merit broader consideration of the framework in which companies operate. Sir Philip Green, Dominic Chappell and the respective directors, advisers and hangers-on who all got rich or richer are all culpable, with the only losers the ordinary employees and pensioners.

Prime minister Theresa May has vowed to “make our economy work for everyone by getting tough on irresponsible behaviour in big business”. Strong words from both MPs and the PM – but will anything actually change? Marie doesn’t seem to think so:

When you have the party of government on one hand professing to want to “get tough” on irresponsible business practices, and then on the other employing men like Green to conduct reviews into government efficiency, and accepting donations from businessmen named in the Panama Papers revelations – the Tories commitment to “toughness” appears dubious. And meanwhile, over 5,000 employees, who put their trust in Green, and the authorities to do their jobs properly, now face a devastatingly uncertain future. All because of the greed of a few men.

Sign the petition to have Sir Philip Green stripped of his knighthood.