Gove to question gov. about promises made by Gove 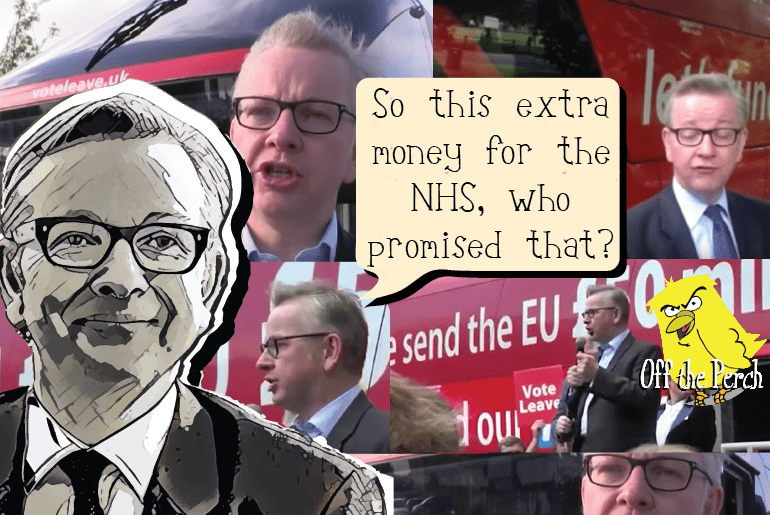 Michael Gove – the man who spearheaded a Brexit campaign so non-factual that it made Donald Trump look like Mr Spock – has been selected to join a committee that will scrutinise the government’s strategy for Brexit.

Despite all of the lies that he told. Despite the way that he used the future of this country as a means to further his own career. Despite being such a blatant puppet of Rupert Murdoch that you can see the mogul’s fingers whenever Gove opens his mouth to lie.

And Off The Perch has been able to procure a transcript of the first exchange between Gove (MG) and his good buddy Boris Johnson (BJ):

MG:  Ah yes, I suppose you’ll be busy working out how to spend the additional £350m that you promised to the NHS?

MG:  Surely you do know, Boris, because you promised. Look – here’s a picture of you in front of a bus that says so.

MG:  Oh, indeed it is, Boris, and I meant every word of it. Honestly I did. *GOVE TITTERS* And if I’d become Prime Minister, I would have been working tirelessly to ensure that it happened.

BJ:    Such a shame that it didn’t work out that way. *BORIS LOUDLY GRINDS HIS TEETH* Maybe if it had, our roles would be reversed, and I’d be questioning you about all of the things that were said.

MG:  And what would you ask me, Boris?

BJ:    Well I’d probably ask how you feel about saying people are sick of experts, when it now appears that the experts were right.

MG:  What an excellent question. So how do you feel about that?

BJ:    How do I feel about it? It was you that bloody well said it!

MG:  But I’m not in government, am I Boris? And it shouldn’t be down to humble backbenchers like myself to answer for the Brexit that this government is constructing.

MG:  Apparently not. Otherwise I wouldn’t be here questioning you, would I?

BJ:    Jiminy-flipping-cricket. If I’d known things were going to pan out like this, I would have just conceded the bet, admitted to David Cameron that I’ll never make it as PM, and paid him the £5.

BJ:    What do you mean ‘I KNOW HOW IT FEELS’? You were the one who betrayed me, you slippery creature from the Black Lagoon!

MG:  You know what they say, Boris – revenge is a dish best served nonsensically. Now if you’ll excuse me, I have to go and laugh maniacally whilst eating raw fish heads from a bucket.

BJ:    Raw fish heads, eh? We’re expecting that to be one of our top ten exports in a few years time – third only to innovative jams and skilled workers.

This is the sort of question that Michael Gove should be asking the government about Brexit, only he can't BECAUSE HE WAS THE FUCKING EGG! pic.twitter.com/TEFTue2FsX

Some people have said that making Gove a scrutiniser of Brexit is like making Charles Manson a judge on the X-Factor, or even more unrealistically, like making Tony Blair our Peace Envoy to the Middle East. The fact is, though, that the more stupid and abhorrent an idea sounds, the more likely it is to happen. And the more stupid and abhorrent an idea is, the more likely this government is to put it into action.