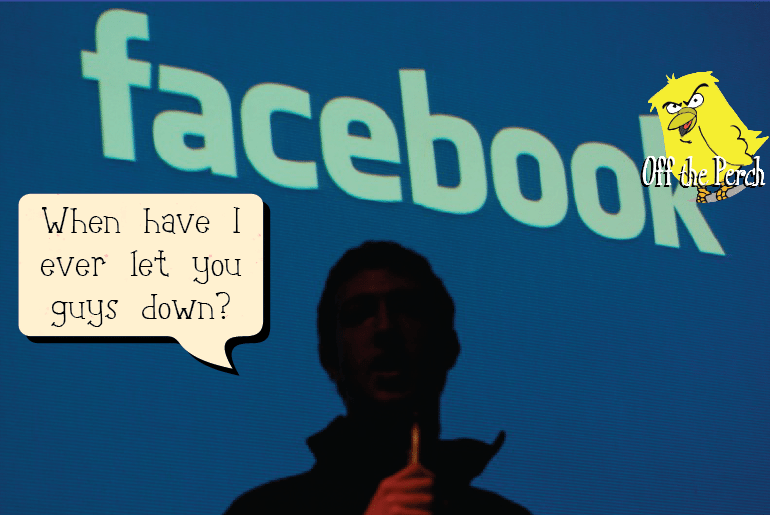 The deep fried scotch-egg that is Donald Trump was recently elected to be President of the USA. Since then, the people who failed to predict this outcome have been furiously trying to work out who’s to blame. One of the things they’re blaming is fake-news.

The media currently seems slightly confused as to what “fake-news” is. This means that they’re bundling together everything from paranoid conspiracy-wank, to biased news-shite, to satire. Weirdly, no one seems to be mentioning outlets like The Sun or The Daily Mail though. Although to be fair, their recent #JigGate fantasy probably didn’t have that much of an influence on the already decided US election. Which isn’t to say that it wasn’t complete and total bollocks, obviously.

It’s easier to blame Facebook than themselves though, and so the media were straight on Skype to that Zuckerberg feller. As usual, the Facebook CEO was very concerned with whatever it was that people were complaining about now.

This is what he had to say on the matter:

I want everyone to know that I’m very concerned about fake-news. Like, really concerned. And any suggestion that Facebook supports one candidate over another is ridiculous. I mean, come on – I’ve got a genius level IQ. Obviously I could see that both of them were terrible.

The next step for us is to look into how we can maybe sort of do something about this. Much like how we maybe sort of did something about hate-speech. Because there’s less of that around now, right? And not just because you’ve un-friended all of your old friends from primary school. It’s mainly because of that, obviously. But not only.

The problem is that most of our server space is currently taken up trying to detect bare female nipples. Those tricksy, tricksy nipples. Always slipping out where they shouldn’t be. God, they disgust me.

And as bad as the world seems now, imagine how much worse it would be if we’d spent time combating hate-speech instead of the wretched female body? It doesn’t bear thinking about!”

And in case you’re wondering, this article that you’re reading now is not fake-news.