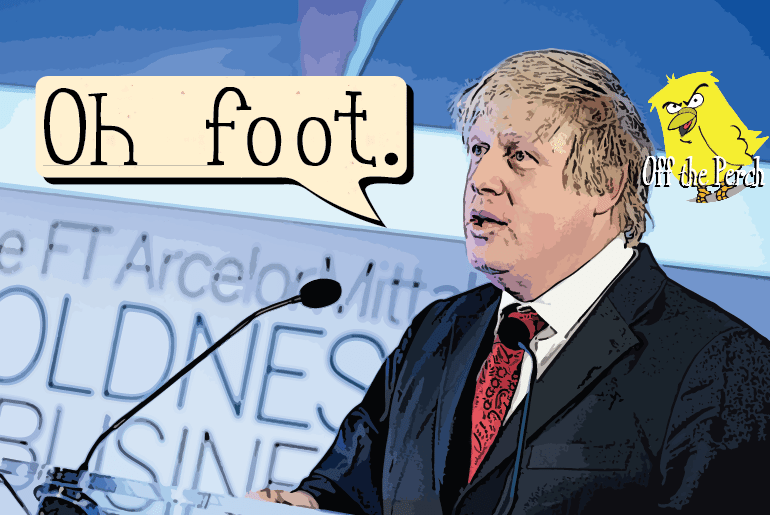 UK Foreign Secretary Boris Johnson has once again failed us, spectacularly. And this time, he’s done a lot more than just figuratively jamming his foot in his mouth.

Have our cake and eat it

Johnson has been routinely criticised for claiming that his EU strategy is to ‘have his cake and eat it’. Now, the government has been criticised for the same thing, after an aide was seen with it written on her notepad.

The EU was quick to tell the government that the plan was:

And that they need to:

Get your heads out of your arses. Your bargaining position is garbage, and thinking you can annoy us into giving you a better deal is unduly-optimistic idiocy.

It’s not been a good year for Boris. His plan to keep us in the EU by campaigning against it was a disaster. His plan to become prime minister as a result of his first plan succeeding was dead on arrival. And to top it all off, he’s been given a governmental role which highlights his gross incompetence on a daily and global basis.

And so this was it. This was Boris’s last stand. He couldn’t put up with Johnny Foreigner telling him what he could or couldn’t eat.

So he descended on the European Fortress of Tyranny (as he insists on calling it) to prove once and for all what he’s made of.

The following scene of Johnson-related humiliation was described by the President of the European Council, Donald Tusk:

It was really quite remarkable. Johnson swung down into parliament via some sort of zip-wire he’d set up. Only he didn’t secure the line correctly out of spite for our European health and safety laws. As such, he plummeted from the ceiling like a hairy bag of potatoes and dislocated his shoulder on a Lithuanian MEP.

So clearly he was off to a bad start, and yet things only got worse from there.

Despite his obvious injury, Boris insisted on addressing the room. Only instead of reading from a prepared speech, he removed some sort of cake from his jacket. It was hard to say what variety it was, as Johnson’s rich-body had smushed it. But the gormless aristocrat said that he was going to ‘have it and eat it’ to show us who’s boss.

Unfortunately for him, he slipped on some icing and ended up doing the splits more drastically than the former USSR. A manoeuvre which resulted in him somehow jamming his own foot in his mouth. An injury which would have been life threatening, if it wasn’t for the wonderful, socialist healthcare that he had immediate access to.

But seriously though, what a clown. What happened to you Britain? You were never exactly cool, but you did used to be a lot less ridiculous.

As a result of BoJo’s injury, the Foreign Secretary has been sidelined for the foreseeable future. This led to the pound bouncing back to its highest level since September.

Although it was straight back down again after the Prime Minister confirmed her commitment to going about Brexit as pig-headedly as possible.