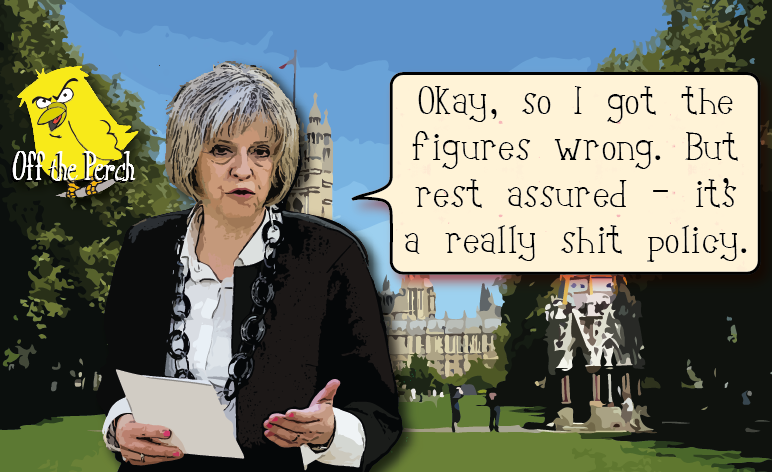 Jeremy Corbyn was criticised today for not being able to immediately recall a number. Which is obviously a crucial skill for any potential Prime Minister, as most of the UK’s day-to-day running revolves around being able to recite precise figures on command.

In a parallel universe, however, it was actually Theresa May who came in for some stick. As not only did she forget her figures, but she actually failed to cost the policy in the first place. And on top of that, the policy itself was actually quite horrible.

In this strange, parallel dimension, Theresa May was being interviewed by someone who actually expected answers. And weirdly, this interviewer was Peter Andre. Andre being that dimension’s pre-eminent journalist. His interview with President Kanye West being their equivalent of Frost/Nixon:

PA: So Prime Minister, how much will your flagship children’s policy cost?

TM: Err… actually, I’ve forgotten. Would you mind if I quickly looked it up?

PA: Yes, of course. Obviously it’s better that you get it right, as only a child would throw a tantrum over not getting an immediate answer.

TM: Ooo-err… my tablet says that it’s been infected with ransomware.

PA: Were you running Windows XP?

TM: I wish! The upgrade would have cost too much, so I’m still on Windows 95, I’m afraid.

PA: Okay, so I guess we’ll just have to talk about the policy itself. A policy which will see you strapping children into soul-milking machines and draining their futures right out of them.

PA: Rather than humouring you, I’m just going to flat-out say that you’re a dreadful person, and we’d be better off voting for a chimpanzee with a knife.

TM: You say that, but would this chimp be as strong and stable as I am?

PA: Get out of my studio.

It’s absolutely fine for people to criticise Corbyn fluffing his numbers. Especially as he went on the radio specifically to speak about that proposal.

But let’s not pretend that briefly forgetting the figures for a costed and worthwhile proposal is anywhere near as bad as not having to remember the cost of a terrible one because you never costed it in the first place.