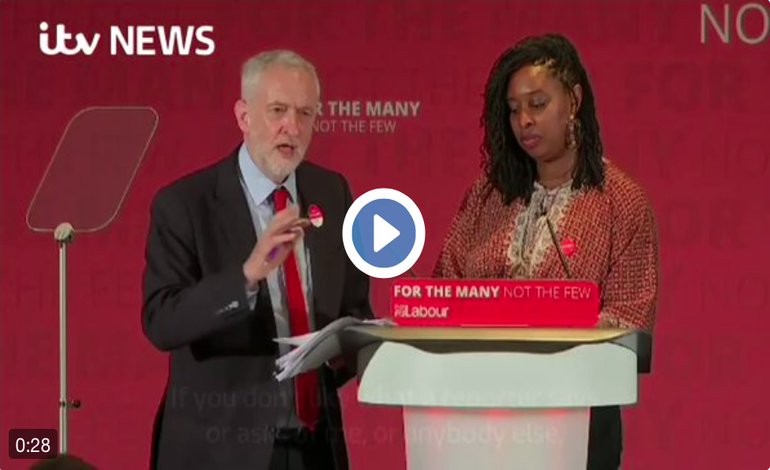 A row has broken out after the UK press seized on a hostile 30 May interview of Jeremy Corbyn on BBC Radio 4. A number of people laid into the interviewer, the BBC, and the wider media. But the Labour leader’s response struck a quite different tone. And it’s left the press speechless.

It had not been an easy day. A moment of brain fog during an interview with BBC Radio 4‘s Emma Barnett on Woman’s Hour became the subject of high ridicule across the UK media. As The Canary‘s Steve Topple wrote:

Barnett asked Corbyn how much Labour’s manifesto proposal to extend 30 hours a week of free childcare to all two-year-olds (1.3 million children) would cost. And he couldn’t remember…

Corbyn, I think, handled it remarkably well… He was honest about the fact he couldn’t remember and wanted to try and find the answer. And in the scale of balls-ups, this wasn’t massive. If you want a complete failure of figures, look no further than Chancellor Philip Hammond wiping £20bn off the cost of HS2, live on the BBC. And at least he didn’t do a Theresa May, who completely forgot where she was mid-interview.

But we should also be fair to host Barnett, because social media has been tearing strips off her. While aspects of her interview were undoubtedly unnecessary (telling the listener Corbyn was looking on his iPad and “waiting for an email”), only last week I reported on her grilling of Conservative James Cleverly. And she absolutely ran rings around him, using Corbyn’s assertion that foreign policy played a part in increasing terrorism.

Nevertheless, and perhaps understandably given the context of media bias against Corbyn, many people were upset with the BBC over the interview. But there is a difference between vigorously holding journalists to account and veering into the personal. And speaking later in the day, a jovial Jeremy Corbyn intervened on the matter. Asked if he felt he had been treated unfairly by Barnett and the BBC, he stated unequivocally:

There isn’t such a thing as being unfair to politicians. If you put yourself up for elected office in public life you are subject to permanent scrutiny.

If you don’t like what a reporter says or asks of me, or anybody else, understand the question they’re asking. We will all do our best to answer those questions.

But under no circumstances whatsoever should anyone throw personal abuse at anyone else because they’re doing the job that they’ve been employed to do. And I will not tolerate it under any circumstances.

The response was a continuation of the Jeremy Corbyn that Britain has got to know over the course of the election campaign. And it will hopefully diffuse a row that was going nowhere. If the aim of the UK press was to make the Labour leader look unstatesmanlike today, he needed no one’s help to defeat it. He ended up looking every bit the statesman, all by himself.