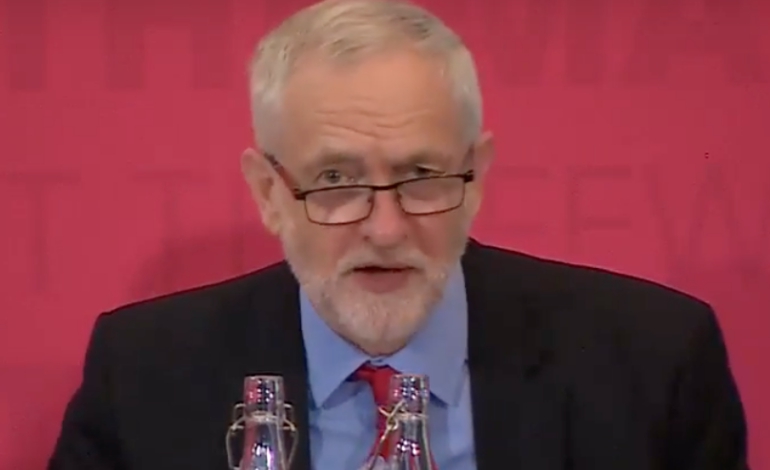 Jeremy Corbyn issued a direct challenge to Theresa May at a press conference on 31 May. Answering a question about who would be speaking in the leadership debate, Corbyn called on the PM to “come and have a chat with me”.

Support for Corbyn is continuing, with some polls now predicting a hung parliament. And this challenge, conducted with dignity and humour, shows exactly why Corbyn could be the next prime minister.

Corbyn confirmed after the press conference that he would take part in the debate. The decision has made May look weaker and wobblier than ever. She now faces an impossible choice: perform yet another U-turn and decide to show up, or look like she’s more scared than ever of facing the public.

Come out, come out, wherever you are

May has spent much of the election campaign in hiding. From her doomed manifesto launch to the times she has met real people, her appearances have been dogged by people telling her the reality of living under Conservative austerity.

Speaking about the leader’s debate on Sky, Corbyn said that there was “no finer way to spend a Monday evening”. But he also slammed it as “ridiculous” that he and May did not have a head-on debate. And he issued a direct challenge:

Come on, Prime Minister – come and have a chat. Come and have a debate. And I can be ever so polite. But there are a number of questions that I want to put to you.

Now I’m sure she’s watching this morning’s press conference. I know she’s not too busy, because she’s not planning a debate today. But why not change your mind? Come and have a debate.

You can watch the challenge here:

The worst election campaign, ever

It’s fair to say that Theresa May has had pretty much the worst election campaign the UK has ever seen. And the original projections of a Tory landslide are now looking distant. Whether it’s been locking local journalists in a room, the ‘dementia tax’, the fact that she has lied repeatedly, or that none of her policies are costed, it has been a disaster.

But it’s also important to remember that Corbyn has had a very good campaign. And although May’s car crash campaign has helped boost his figures, his popularity has also increased because Labour has a manifesto that really does speak to “the many”.

And whether it was the cool and good humoured way he answered Jeremy Paxman’s questions, or the addresses he’s been giving to the thousands of supporters who have lined the streets, he is showing there is an alternative. In doing so, he is also showing that he is a strong and capable leader.

Corbyn has now gone a step further. He has issued a direct challenge to the Prime Minister. And he has put his money where his mouth is in agreeing to turn up to the debate.

On 8 June, there is a chance of an alternative. It’s up to voters to make sure that, when we wake up on 9 June, we begin to see a kinder, more compassionate world.