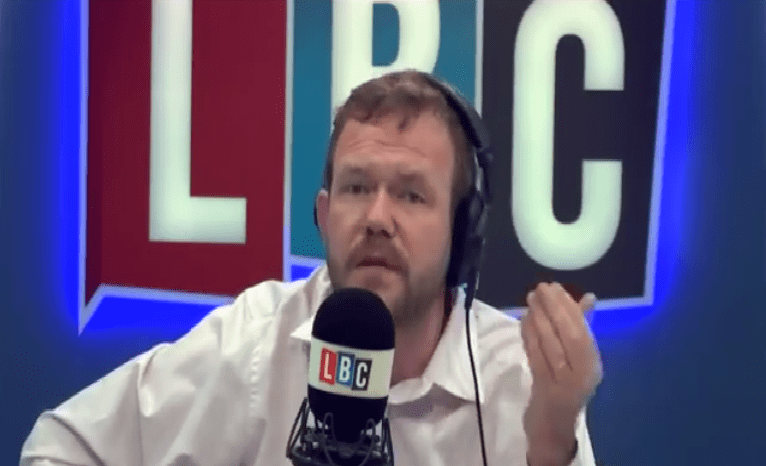 In one fell swoop, James O’Brien made three front pages on 31 May look utterly ridiculous. The Daily Mail, The Telegraph and The Express all opted for front pages attacking Labour on immigration.

But as the LBC presenter pointed out:

It’s not even a policy. It’s not even in the party manifesto. And it’s not even a tiny bit different from what the government received as advice from their top immigration adviser last year.

Despite the zero truth, The Telegraph went with the same front page story as The Daily Mail:

O’Brien said the example was indicative of a wider problem in the UK media:

Indeed, the front page of The Express focused on a different immigration story. But in a display of such double standards, The Express used the story to launch a thinly veiled attack on Labour while lauding the Conservatives. Even though the Conservative Party has failed to meet both its 2015 and 2010 immigration targets by a large margin.

‘Send the lefty bandwagon to Europe’

O’Brien had kicked it off by saying:

Today, the most powerful newspaper in the country is trying to spook you into thinking that Jeremy Corbyn is gonna, I don’t know, send the lefty bandwagon to Europe and fill it up with immigrants before driving it back himself.

Despite the fact that the same newspaper – the same journalist – reported the same policy last year when it was a senior government adviser making precisely the same suggestion in completely and utterly different language, tone and intent.

One of the same Daily Mail journalists reported the very same policy very differently in August 2016, with the headline Low-skilled EU workers should apply for permits says government’s top adviser. But now, the same policy has been co-opted to attack Corbyn’s Labour, as the party surges in the polls. The whiff of desperation is strong indeed.

On 31 May, however, O’Brien exposed three leading national newspapers in one fell swoop.