For the first time in my life, I'm voting Labour this general election. It's time to bring decency back to Britain [EDITORIAL] - Canary 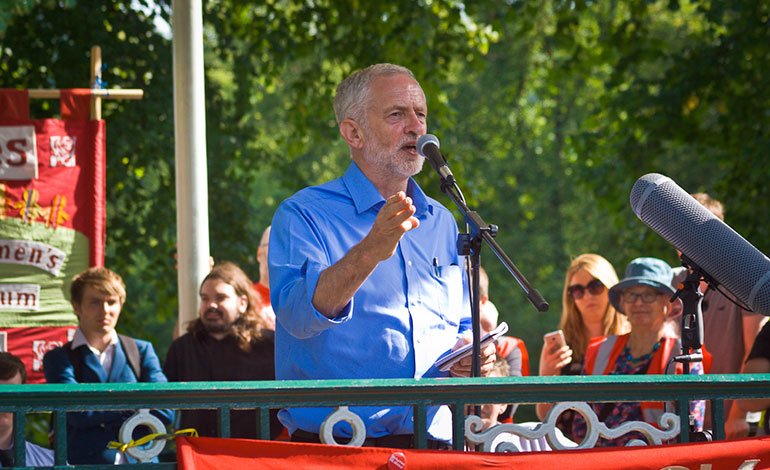 For the first time in my life, I will be voting for Labour in a general election on 8 June. Having been a floating voter throughout my adult life, it’s never really felt like my vote could shape the election. This time, it does. And I want to use that vote to bring decency back to this country.

For seven long years, this country has been run by short-termist, privileged, inhumane liars. That’s a strong statement. But it’s also true.

They said they would annihilate the budget deficit. But three general elections later, they are making the same promise with no result.

They said they would bring down the national debt. But they almost doubled it.

They said we were ‘all in this together’. But corporations are getting £93bn a year in handouts (funded by the taxpayer), while nurses, police officers, and sick and disabled people are queuing up at food banks.

And now, the Conservative Party and the media want to tell those who paid the price of these policies that the Tories are the party of the economy? Whose economy?

A recent study found that, thanks to the Conservatives’ apartheid economics, the UK doesn’t even have a national economy any more. We are now 12 regional economies, and the Westminster government is really only investing in two: London and the south-east. And predictably, only two of those 12 regions are as well off or better off than before the 2007 financial crisis: London and the south-east.

Every other region is worse off today than 10 years ago. And some areas are in outright depression.

And what are the Conservatives offering at this election? If May’s manifesto happens, we have only worse to come. By 2021, the poorest families in Britain will be more than 10% poorer [pdf p74] than today. But the wealthiest families will be around 5% richer [pdf p74]. I’m sorry, but fuck that.

It was a choice, not a necessity

And none of this was inevitable. The 54% rise in homelessness. The 1.2 million food bank parcels handed out per year. The schools sending begging letters to parents to remain open. Patients dying in hospital waiting rooms because the private healthcare provider decided a non-medically trained receptionist doing triage was better for the bottom line.

None of this was an economic necessity. The savings are paltry compared to that £93bn annual handout to big business.

A call for human decency

Human decency demands that we take better care of each other. This is a team game. The better each of us does, the better we all do. The kids we choose to keep well-fed and educated today are the doctors and scientists of tomorrow. The elderly people we keep warm and safe are simply us plus time. We are each unique elements, but together we can be so much greater.

I don’t know a single person in my life who hasn’t told me they are sick of ever-rising rents, commuter fees, energy prices, and house prices. And we’re all looking upon the devastating results of cuts to education and health funding with unbridled horror. Most of us under 40 have started to give up on the hope of a state pension, and are genuinely fearful about an unsupported old age.

Who isn’t looking at people like Donald Trump and Theresa May and thinking: ‘isn’t it time we had a fully-functioning human being in charge’?

Well, it’s no good just complaining and wishing. It’s time to do something to make a change.

The Labour manifesto brings all the services back into our hands. If you thought the Brexit vote was about taking back control, it is nothing compared to this. Decades ago, we owned these critical services. And 30 years of neoliberalism later, we are renting those services back at infinitely higher costs. We pay more, but we control less.

Time to put words into action

We are crying out for a prime minister courageous enough to take on the vested interests and create a country that works for everyone. We need a prime minister that does the decent thing. Not just when the polls align, but as their default mode. And that courage and decency is written all over Jeremy Corbyn’s face, and his voting record. This is not a difficult decision. This is a no-brainer.

Never in my life have I felt this sense of excitement ahead of filling out my ballot paper. I will tick that box on 8 June as if I am swinging a sword. And you should too. Because this is the biggest Battle for Britain since World War II. And we can win.

So for ourselves, and each other: let’s do this.