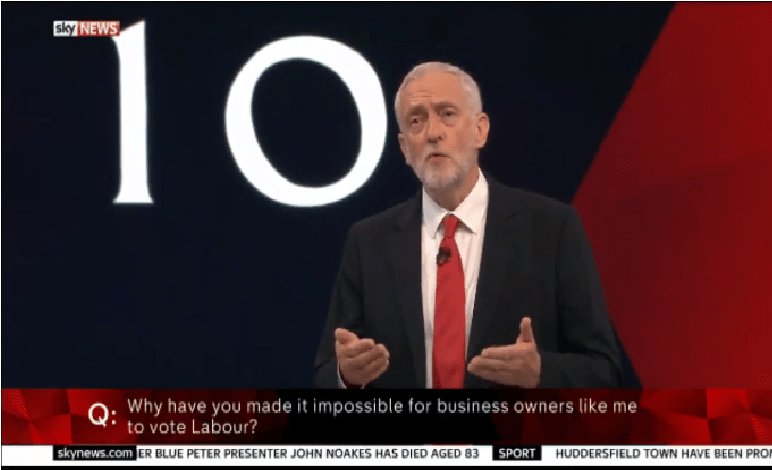 A carefully considered answer on The Battle for Number 10 may have won Jeremy Corbyn thousands of votes. Because he addressed a major concern of many voters: that his well-meaning policies may have unintended consequences that are bad for the economy. On national television, Corbyn showed that the opposite is true.

And the response has been quite extraordinary.

When the election was announced, I couldn't imagine voting for Jeremy Corbyn/ Labour. Now can't imagine anything else #battlefornumber10

Never considered voting Labour before tonight, after #BattleForNumber10 it's a strong possibility

After Theresa May refused to debate Corbyn head-to-head, the leaders faced a studio audience separately on 29 May. Audience member Maneet Kapoor asked [15:05] the Labour leader:

I’m a proud Mancunian and a small business owner brought up in a Labour voting household by salt-of-the-earth parents who gave me their best. Why have you made it impossible for me to vote Labour in this election with your ruthless, short-sighted policies, such as 26% corporation tax, the abolishment of zero hour contracts, ten pound an hour minimum wage, and now you want to put VAT on my children’s school fees?

One part of Corbyn’s calm and detailed answer tackled widespread concerns over the £10 minimum wage:

Surely, a ten pound an hour minimum wage… would mean we actually spend probably a bit less on working tax credits. But it would also make an awful lot of people a lot better off and… they’d spend the money in the local economy. It would be something that would be good for all of us.

Currently, the UK taxpayer is paying out £93bn a year in financial aid to corporations. That’s more than the annual cost of the entire education system (£59.2bn), all housing-related benefits (£27bn), and unemployment benefits (£3bn) combined.

That £93bn does not even include the working tax credits that Corbyn speaks of. The taxpayer spends an extra £11bn a year topping up workers’ wages for corporations that could easily afford to pay a living wage. £1bn of that sum makes up the shortfall for the staff of just four supermarket giants (Tesco, Asda, Sainsbury’s and Morrisons), because they are paying poverty wages. So as Corbyn points out, a ten pound minimum wage would actually save us billions. Some of that money could then be transferred from these huge corporations to small businesses that actually need help paying a living wage.

The Labour leader also made the understated point about consumer demand. Around 22% of workers currently earn below the living wage. Give them a pay rise, and we’ll see a spending boom in the local economy.

Labour’s corporation tax… lower than 2010, and way lower than under Margaret Thatcher

Corporation tax was 28% in 2010. This government has reduced it and proposes to reduce it further. We’re gonna put it back up… because this country is badly divided between the richest and the poorest. You put corporate tax and tax at the top end down: the division gets greater.

Under the Conservatives, the richest 1,000 families have increased their fortune by over 155% since 2009. For the rest of the country, it’s been austerity: food banks for nurses and police officers. That’s a direct consequence of policies like tax breaks for corporate giants.

The media let May draw the battle lines after she refused to debate Corbyn on TV. But in a rare meeting with ordinary people, May still repeatedly dodged questions and offered pre-packaged soundbites. Corbyn’s calm, careful and inclusive performance actually treated the public like adults. With this particularly detailed response, the Labour leader may have won thousands of votes, carefully addressing the major concerns of huge swathes of the electorate.

– Get out there and vote in the 8 June general election.