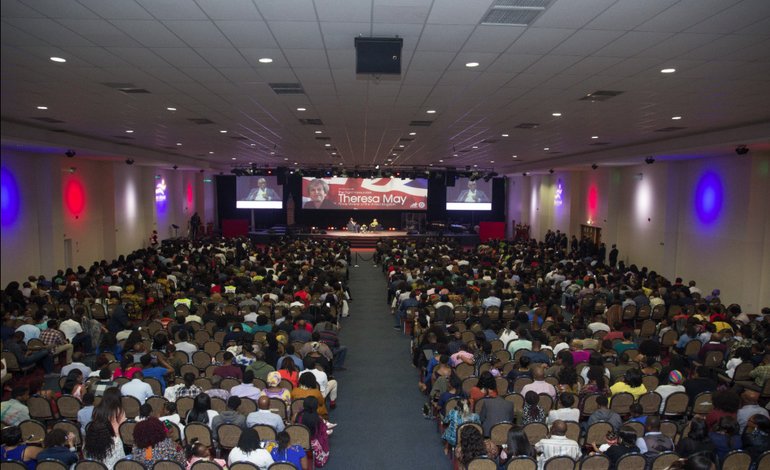 Conservative leader Theresa May reportedly spent Sunday 28 May at a homophobic church. The Christian fundamentalist church has been accused of holding exorcisms to ‘cure’ gay people.

The Church carries out ‘exorcisms’ of people who are sexually attracted to members of their own sex, but insists that such ‘exorcisms’ are done only with the calm consent of the person concerned. This has failed to satisfy critics.

The Evening Standard also published the claims, which the Evangelical Alliance denied vigorously.

But as Pink News reports, it doesn’t take much searching to find some merit in the allegations:

Online materials from the Redeemed Christian Church of God, of which Jesus House is a part, do explicitly call for Christians to help gay people ‘repent’ their sexuality.

The RCCG Sunday School materials teach: ‘Homosexuality is a sin and like any other sin, it needs to be dealt with in the only way possible’.

‘It needs to be laid at the cross and repented of. Christians should pray for the salvation of the homosexual’.

The website continues to claim that ‘homosexuals should be shown the love of Christ and should be restored to God’s society to escape divine judgement’.

The church is run by Pastor Agu Irukwu. The pastor’s infamous 2006 letter to The Telegraph railed against Sexual Orientation Regulations, put in place to tackle homophobia. The letter accused the gay community of having “disproportionate access” to politicians, resulting in “Christianophobia”. But this was not what bothered him most. Ikwuru was most concerned with the relationships of same-sex couples being considered equal to those of opposite-sex couples. He wrote:

The regulations force Christians in churches, businesses, charities and informal associations to accept and even promote the idea that homosexuality is equal to heterosexuality.

May has not been blindsided. Boris Johnson faced condemnation from LGBTQ+ groups for visiting the church in 2009. So the Conservative leader made this visit in full knowledge of its homophobic views.

Both May and Jesus House made much of the visit on social media:

Fantastic to meet members of the congregation @jesushouseuk, one of the most lively growing churches in the UK. pic.twitter.com/H8GPU59A7S

Prime minister of the United Kingdom #TheresaMay @theresa_may @Number10gov in a Q & A with Pastor @agu_irukwu at #SundaysAtJH #GE2017 pic.twitter.com/dz2h3nURFc

The Conservative leader has a poor history when it comes to LGBTQ+ rights. She has voted against equality legislation and adoption by same-sex couples. Her approach to LGBTQ+ equality in the UK has softened since 2010. But the treatment of LGBTQ+ immigrants and asylum seekers grew notably worse on her watch.

May could have visited any number of religious houses in the UK to extend her hand to faith communities. But her visit to this particular church suggests she is sending signals to hardline evangelicals in the UK, at the cost of the LGBTQ+ community. And the Conservative manifesto doesn’t mention the LGBTQ+ community once.