Theresa May considering becoming a politician 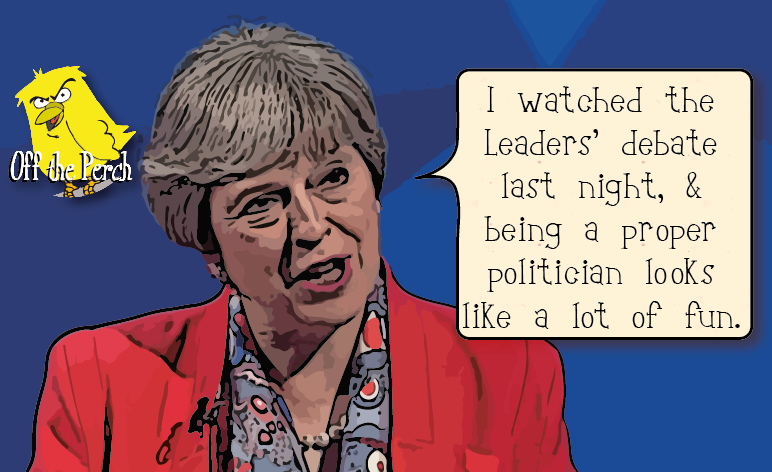 Several weeks ago, people were surprised when Theresa May ruled out appearing in the TV leaders’ debate. Several weeks later, people understood completely. Because she isn’t really a politician. She’s just some person with an adequate ability to remember slogans and a sub-optimal skill at delivering them.

But although she didn’t turn up, May did watch the debate at home. And it’s inspired her to make a move into politics.

A new line of work

Off The Perch caught up with May at one of those many un-managed interviews she’s been holding (lol!). She told us:

Watching people like Jeremy Corbyn and Caroline Lucas has really given me a fresh perspective. I was told that under no circumstances should I ever answer a question. But now, I realise that if you actually give an answer, people stop looking at you as if you were some sort of hideous space beetle masquerading as a human being.

I’ve also seen that it’s possible to talk in sentences rather than slogans. Take ‘Brexit means Brexit’, for example. Sure it sounds clever, but the problem is that I have no idea what ‘Brexit’ actually means. So every time I’ve said ‘Brexit means Brexit’, I might as well have been muttering ‘thingymebob means shit-err-what?’

The problem with May thinking she could just talk freely was quickly exposed, however. As saying what she meant involved admitting how horrendous her Tory policies are. Which is why she told the journalists in attendance:

NHS means ‘National Hell Service’. Education means keeping enough of you in the dark for us to carry on getting away with it. Fox hunting means communally tearing animals to shreds as a means of normalising and bolstering the lack of empathy that is necessary for us to operate. Brexit means Boris Johnson. Dementia means bye-bye life savings. Strong and stable means tossing police officers, firefighters, and soldiers out on their arses. Defence means bombing countries a bit and then leaving them to it. Tackling national debt means increasing national debt. Pro-business means anti-employee. Strong and stable means getting away with murder because the gutter press hides the bodies. And Brexit also means 1984.

And seven years of it so far means you’ve no right to complain if you vote us back in. Thank you very much. Vote Tory!

Her speech went badly of course, but only about as badly as the rest of her terrible speeches.