'What have firefighters done for us lately?' asks shameless, austerity-pushing failure - The Canary 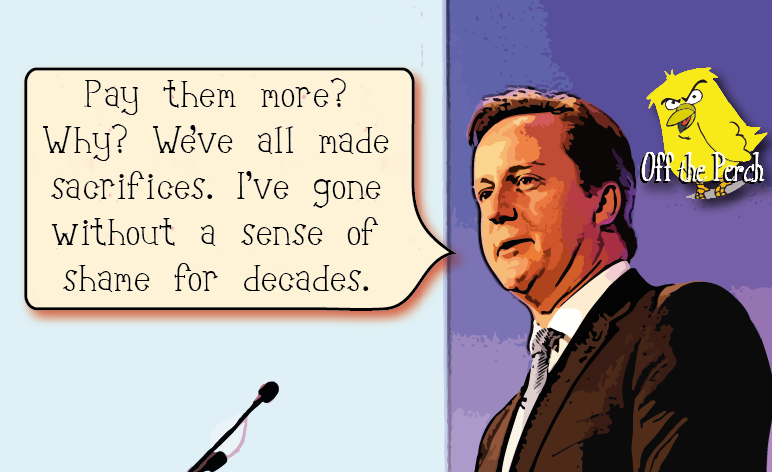 Emergency service staff are increasingly famous for getting the job done despite all the odds being stacked against them. David Cameron, meanwhile, is famous for having fucked everything up despite being the person who stacked those odds.

This is why some people were surprised to see him call the emergency services “selfish”. Because following years of austerity, our firefighters and nurses are basically like the Avengers at the end of that film – bravely preventing the horror from flying through the baddie-portal. Which is significant, as even the shit-heel politicians who thought the Avengers played fast-and-loose with the rules knew to keep their mouths shut once the baddie-portal had opened.

Cameron gave his pro-austerity speech from the comfort of his Scrooge McDuck-style money pool. After swimming a few lengths, the ex-PM dried himself off with a towel made out of an irreplaceable Edwardian tapestry. He then gave the following speech – his voice projected through Henry VIII’s diamond-encrusted enema-funnel:

The problem with giving money to poor people is that they just pass it around amongst themselves. That’s why their £10 notes are always so scruffy. I asked one of them why his butler hadn’t ironed the creases out of a £20 note once, and he said he couldn’t afford a butler!

So if anything, giving them more money is only going to exacerbate the problem.

When his speech was completed, Cameron was carried out of his money lagoon by a team of barely-clothed junior doctors who were trying to pay their way through university. When it was pointed out that Cameron – like all rich people – was literally being propped up by the non-millionaire classes, he said:

And they say I never give anything back! Who do you think paid them the pittance that they’re sharing amongst themselves?

When the junior doctors heard what he had to say, they threw him into the nearest chocolate fondue fountain.