Theresa May insults firefighters who saved lives at Grenfell. So Jeremy Corbyn steps in [VIDEO] - Canary 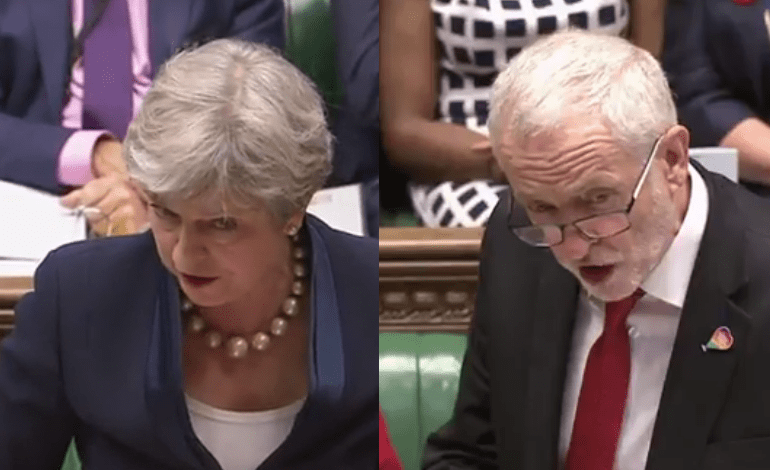 Many Conservatives cheered when they voted the Labour amendment on public pay down. Hence, May’s claim was met with rumbles of disbelief from the opposition benches. The Conservative public sector pay policy means nurses, for example, have been hit with a pay cut of 14% in real terms since 2009. Inflation of goods and services means a pay ‘cap’ is actually a pay cut, pinching workers tighter every year.

So Jeremy Corbyn stepped in and shut down her insulting claim:

The Prime Minister found £1bn to keep her own job. Why can’t she find the same amount of money to keep nurses and teachers in their job, who, after all, serve all of us?

On 5 June, the Conservatives appeared to U-turn on their public sector pay policy. One profession – firefighters – has been offered a pay rise of 2% in 2017 and a possible 3% rise in 2018. But Fire Brigades Union (FBU) General Secretary Matt Wrack set the record straight:

It is sickening to hear politicians praising firefighters for the outstanding work they do every day of their working lives only to be told they have to tighten their belts as a result of economic problems caused by bankers.

This offer demonstrates that the 1% cap is dead in the water but the offer from our employers is simply not enough.

It looks like many PMQs viewers agree with Wrack and Corbyn:

Soiled leader, who paid £1.5b to extremists to prop up a toxic government, responding like a damaged reflex as rich men bray. #PMQs

In parliament, Corbyn also pointed out that the case for a change in public sector pay policy isn’t just moral:

The public sector pay cap causes real shortages in nursing and teaching and many other professions, as well as real hardship.

The pay cap is also terrible for our social care, healthcare, teaching and emergency services. At PMQs, May claimed she ‘values’ the people who work in these industries. But the gulf between her rhetoric and the ideological austerity agenda she presides over means her words are not just hollow – they are insulting. First, May handed the DUP £1.5bn to cling onto power. Second, she led a unanimous Conservative vote against raising public sector pay. Corbyn rightly shut the Prime Minister’s botched excuses down.