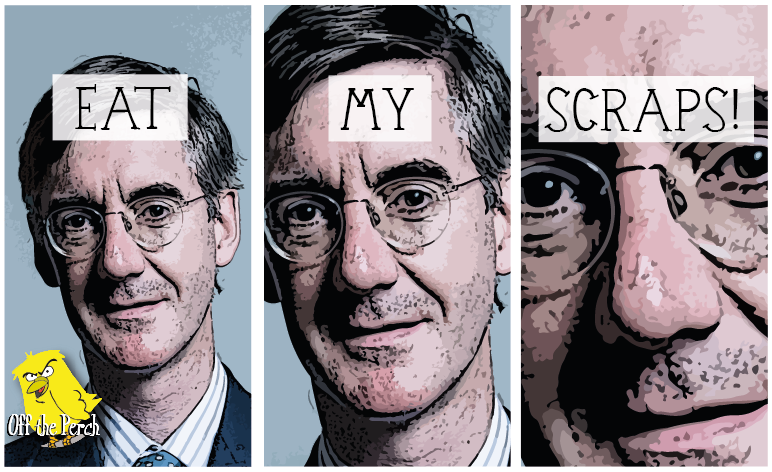 Jacob Rees-Mogg received some criticism for talking about how ‘uplifting’ he finds the people who work in food banks. Probably because a Tory praising food bank staff is a bit like an iceberg being inspired by lifeboat operators on the Titanic.

In an effort to show his caring side, Rees-Mogg has been trying to engage with people. The problem is that he apparently doesn’t have a caring side, and so things have obviously gone downhill from there.

Rees-Mogg decided it would be a good photo opportunity to cut out the middleman and feed some poor people directly. This is why he headed down to the park with a stale loaf of bread and some withered vegetables.

Results, however, were not forthcoming.

Rees-Mogg was confused, because the people he approached all looked quite poor. “Look at that one,” he said – pointing in a nearby mother’s face. “Yowzers! She’s scruffier than the woman that father kept in the attic!”

Said scruffy mother refused to eat stale bread crumbs out of his hand though. Even when he loomed over her with his creepy spider body and said:

Rees-Mogg was later arrested for forcibly trying to make an old man eat some celery. He was released though, as it turned out there’s an archaic law that allows aristocrats to force poor people into eating kitchen scraps.

And even if there wasn’t, the government will be above the law soon anyway, so it’s basically just open season.