A company just tried to use David Bowie's image to sell bullets at a UK arms fair. It didn't end well. - The Canary 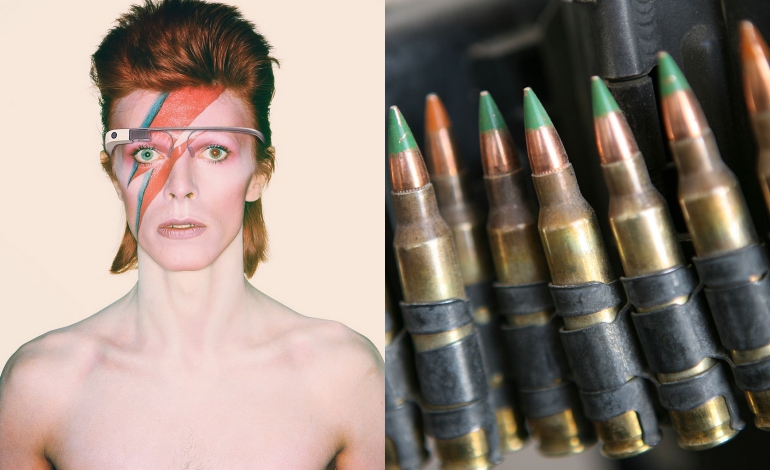 A firearms and ammunition company attempted to use David Bowie’s image to sell its wares at one of the world’s largest arms fairs. But it didn’t go well. Because the company seemed to forget that it needed permission to use the image.

The Defence Security and Equipment International (DSEI) arms fair is currently taking place in East London. As The Canary previously reported, over 100 people have been arrested trying to stop the arms fair from taking place.

In 2015, arms dealers from 61 countries queued up to view the merchandise of 1,500 exhibitors. 14 of the countries invited, including Algeria and Bahrain, had authoritarian regimes. Four, including Saudi Arabia and Pakistan, have been listed by the UK as having human rights issues. And a further 11 countries on the list, such as Ukraine and Iraq, are currently at war.

London Mayor Sadiq Khan wanted this arms fair banned from the capital. But he said he was powerless to stop it. Meanwhile, there is an eerie silence from the government over DSEI. Although this is perhaps unsurprising. Because the event is sponsored by the Ministry of Defence and the Department for International Trade. And figures show that the UK has made ten times more out of arms sales to Saudi Arabia than it has given in aid to Yemen.

Edgar Brothers is a company manufacturing ammunition and firearms. It describes itself as:

one of the oldest, most well established importers and wholesalers of firearms, ammunition and associated products in the UK and Northern Ireland.

And it decided to use Bowie’s image to sell bullets. This was noticed by Darren Cullen, an artist who currently has work at the Art the Arms Fair exhibition.

UK pavilion at #DSEI seems to include a photo of David Bowie to help advertise killing machines. Not sure he'd be down with this. #stopDSEI pic.twitter.com/DDW1PN5ciz

Not down with this

Speaking to The Canary, Cullen described what happened:

I was checking Instagram to see if any of the DSEI contractors were posting about being behind schedule due to the Stop the Arms Fair blockades and I saw this photo of the UK arms trade pavilion with a giant picture of David Bowie. It really stuck out to have someone like Bowie featured among this festival of violence, and just in really bad taste considering his own recent death.

I got in touch with the rights-holder of the photograph, the estate of the photographer Duffy, and just hoped to hell they hadn’t given permission for these bastards to use his image. They got back to me the next morning thanking me for bringing it to their attention and saying they had definitely not given permission and they’d been frantically trying to have the photo removed. The Duffy Archive were really on top of it, full credit to them. They finally got hold of a director at Edgar Brothers and the display was taken down straight away due to their complaint. As far as I know, they’re still in discussions as to what the next steps are. I hope the Duffy Archive hammer them for it.

We are not in a position to comment just yet. We’re actually still in conversations with the Duffy Archive in relation to the incident in question.

A tale of two events

DSEI ends on 16 September. Speaking to The Canary, Andrew Smith from Campaign Against Arms Trade (CAAT) described the arms fair as “two events”:

The last two weeks have been a story of two events. One has been the arms fair itself, which has seen weapons being promoted to some of the most brutal and oppressive regimes in the world.

The other has been the solidarity and the optimism offered by thousands of activists and campaigners, who have been rightly appalled by these arms exports and the atrocities they could be used in for years to come. DSEI is a moral abomination. It’s time to shut it down for good.

And Smith has a clear message for Bowie fans:

DSEI and the UK government may be experts at pushing arms exports, but when it comes to David Bowie they are absolute beginners. The real heroes were protesting outside DSEI, while the scary monsters and super creeps were inside. We need to do all we can to keep the arms fair under pressure.

DSEI may be nearly over, but the arms trade continues throughout the year. And the arms dealers have offices and factories around the country. It’s down to all of us to let them know that this trade will not continue in our name; that we can and will keep up the pressure. Together, we can shut them down.

– Find the arms dealers on your doorstep and take action against them.