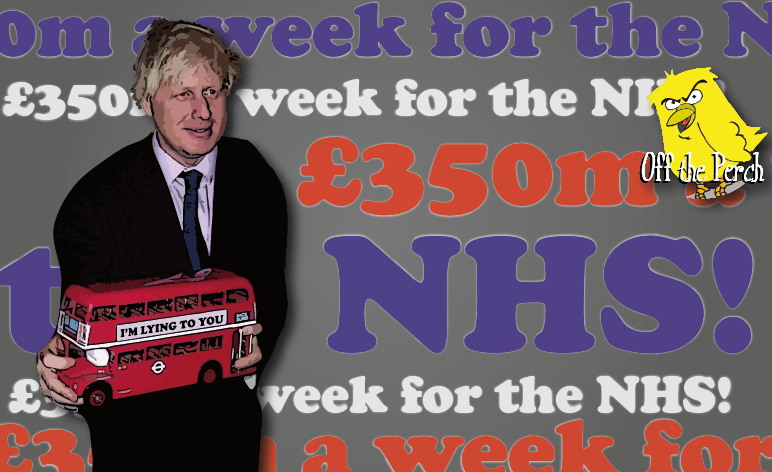 In 2016, a scam was perpetrated against the British people that made PPI look like TLC. A scam known as the ‘£350m-a-week NHS Swindle’. A scam that many were perceptible to, as the conmen behind it discovered our one weakness – our kryptonite:

WRITING LIES ON A FUCKING BUS.

Since then, British citizens have undergone extensive hypnotherapy to help us better spot untruths – even when they’re written large on public transport. One returning conman doesn’t seem to realise that though, as he has once more promised – wait for it:

£350 FUCKING MILLION POUNDS A FUCKING MONTH FOR THE NH-FUCKING-S.

Unfortunately for Johnson, the people of Britain are by this point resilient to his bullshit. Much like how catching a disease leaves you immune to it in future. Although obviously that comparison is lacking, because Johnson is clearly much, much worse than any disease. Even that really bad one that does all the irreparable damage to your area.

As such, Johnson had barely rambled through his latest manifesto before the first innovative jam was thrown at him.

Of course, it isn’t only the previously-scammed who are annoyed. The people who helped Boris scam us the first time are equally upset. Because when you’ve gotten away with the scam of the century, the last thing you want to do is remind everyone about that time when you scammed them.

Even the Queen is unhappy. She was overheard telling the Archbishop of Canterbury:

Is this fuckwit for real? I’m not being funny, but someone needs to bang this c*** out – pronto.

To which the Archbishop replied:

Many are saying that Boris has once more shown he’s not PM material. Although to be fair, ‘PM material’ doesn’t really mean much anymore. Because the last two Prime Ministers included a human being who allegedly screwed animals and a robot who was allegedly a human being.

If anything, Boris – with his transparent charm, vicious nature, and archaic, pug-faced buffoonery – would be the most perfect example of a Tory PM yet.

And you can write that on the side of a fucking bus.