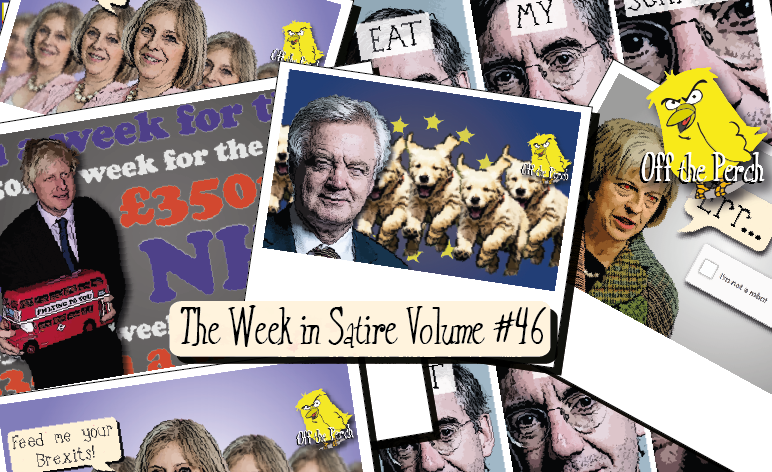 A week in which Boris Johnson recommitted to the £350m-a-week NHS pledge! A week in which the British public laughed hysterically at what they assumed was a funny joke! And a week in which they realised he wasn’t joking, and chased Mr Johnson into the sea with pitchforks! 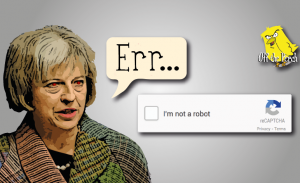 When Theresa May was accused of being a robot, she reassuringly explained:

I am not a robot. ERROR! ERROR! Please insert conscience!

Which was obviously enough for most of us to believe that she was probably human. Or, at the very least, some sort of shabby cyborg.

Her person-status has once more been thrown into question, however, as the PM has shockingly failed to complete an online CAPTCHA test.

I am not a robot

The Prime Minister was setting up a WhatsApp account for herself. Possibly because she needed a method of sending messages without them being leaked. Or maybe because our loyal cash-cows friends in Saudi Arabia needed a means of ordering murder toys defence equipment without attracting too much attention.

When setting up her account, though, May encountered the familiar CAPTCHA test:

Most people would have simply used their mouse cursor to tick the appropriate box. May did not do that, though. She instead stared unblinkingly at the screen for 52 minutes before asking:

Is there something I am supposed to do? 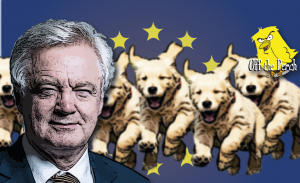 So far, Brexit talks have been going…

…about as well as could be expected?

The next round of talks has been delayed, however, with some people suggesting that:

But the official reason is that, although we do indeed have a plan, said plan has unfortunately been eaten.

Speaking to the press, Dave Davis explained that:

Would you believe that my homework – err – I mean my detailed Brexit plan – was eaten by a dog?

There was a murmuring of disbelief in the room.

What if I told you it was three dogs? And that they were a German Shepherd, a French Bulldog, and an Irish Wolfhound?

There was a commotion in the room at this point, as journalists from The Mail, Express, and Sun started shouting things like, “TYPICAL!” and “SEND THEM BACK!” and “BRING BACK HANGING!” 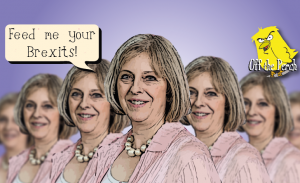 Evil woman promises to use unlimited power for political good

The Conservative government’s EU Withdrawal Bill has passed its first hurdle. A bill which will end the supremacy of EU law, but also give the Tories the sort of power that you wouldn’t want anyone to have – least of all a Tory government that’s inhumanity is only matched by its incompetence.

Speaking to a room full of people who were pretending to be members of the public, Theresa May explained:

When the bill passed its first test, May said to the same room:

MUWAHAHAHAHA! AND SOON I WILL BECOME PURE ENERGY! 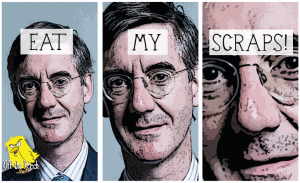 Jacob Rees-Mogg received some criticism for talking about how ‘uplifting’ he finds the people who work in food banks. Probably because a Tory praising food bank staff is a bit like an iceberg being inspired by lifeboat operators on the Titanic.

In an effort to show his caring side, Rees-Mogg has been trying to engage with people. The problem is that he apparently doesn’t have a caring side, and so things have obviously gone downhill from there.

Rees-Mogg decided it would be a good photo opportunity to cut out the middleman and feed some poor people directly. This is why he headed down to the park with a stale loaf of bread and some withered vegetables.

Results, however, were not forthcoming.

Rees-Mogg was confused, because the people he approached all looked quite poor. “Look at that one,” he said – pointing in a nearby mother’s face. “Yowzers! She’s scruffier than the woman that father kept in the attic!” 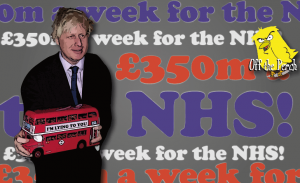 In 2016, a scam was perpetrated against the British people that made PPI look like TLC. A scam known as the ‘£350m-a-week NHS Swindle’. A scam that many were perceptible to, as the conmen behind it discovered our one weakness – our kryptonite:

WRITING LIES ON A FUCKING BUS.

Since then, British citizens have undergone extensive hypno-therapy to help us better spot untruths – even when they’re written large on public transport. One returning conman doesn’t seem to realise that though, as he has once more promised – wait for it:

£350 FUCKING MILLION POUNDS A FUCKING MONTH FOR THE NH-FUCKING-S.

Unfortunately for Johnson, the people of Britain are by this point resilient to his bullshit. Much like how catching a disease leaves you immune to it in future. Although obviously that comparison is lacking, because Johnson is clearly much, much worse than any disease. Even that really bad one that does all the irreparable damage to your area.

As such, Johnson had barely rambled through his latest manifesto before the first innovative jam was thrown at him.