REVEALED: What was inside Farage's letter to the BBC - Canary 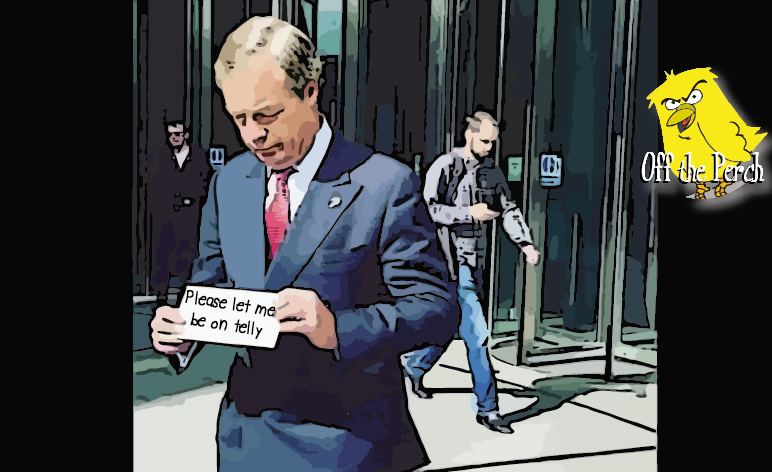 On 20 September, Nigel Farage arrived at the BBC brandishing that most fearsome of all weapons… A HAND-WRITTEN LETTER!

But what was written in this letter? Farage claimed he was cancelling his BBC licence fee because of a documentary in which someone suggested his shameless promotion of xenophobia may be partially responsible for the proceeding rise in xenophobia.

Off The Perch has seen the letter, though, and can exclusively confirm otherwise.

I’m sorry about the dramatic delivery, but it’s getting harder and harder to get noticed. I spoke at a far-right rally in Germany the other week, and most people just shrugged and called me a ‘lizard-faced bellend’.

I’m contacting you because I think it’s very important that I’m on TV – now more than ever. The LBC gig is great, but they’ve said that if I keep making stuff up, they’re going to replace me with Morrissey.

Obviously, it’s getting harder to justify putting me on TV. I mean – I’m not leading a political party anymore – and the party I was leading is only still going because our members get a discount at Wetherspoon’s.

I was thinking that maybe I could become a TV personality. As such, I’ve come up with some TV pitches. All of which, I think you’ll agree, are excellent:

Looking forward to hearing back from you.

Off The Perch understands that all five of these shows have been greenlit, as well as a new channel called BBC Farage Extra.