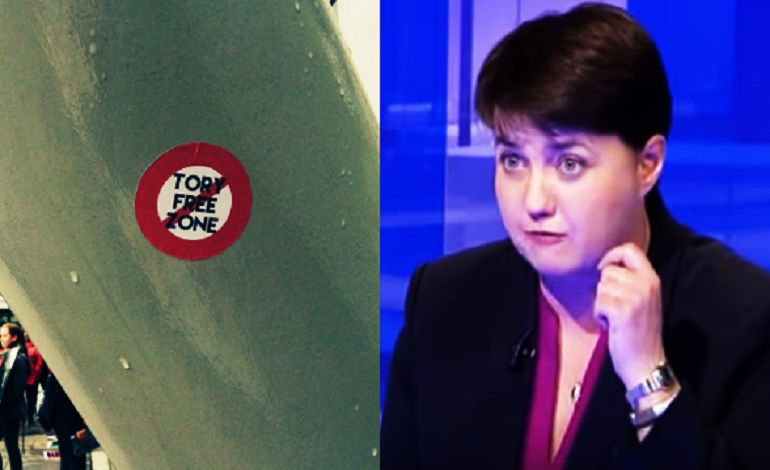 There were angry scenes at the Scottish parliament on Thursday 21 September, as a row over racism in the Conservative Party came home to roost for its leader in Scotland Ruth Davidson. It centres around a racist tweet sent by a Scottish Conservative councillor, and offensive comments made by another councillor and a Tory MP. And protesters weren’t going to let the matter lie.

In May, two Scottish Conservative councillors were suspended for sending offensive tweets. But since then, they have been reinstated by the party.

Alastair Majury and Robert Davies, both Stirling councillors, were suspended from the Conservative Party in May. Majury’s comments included comparing Scottish nationalists to Nazis, attacking benefit claimants, and saying the SNP was too busy talking about gay marriage.

Davies, meanwhile, posted several tweets with black and white photographs of a group of black people next to a cargo plane. His comments included ‘keep your loin cloths with you at all times. Spears go in the overhead locker’.

On 24 August, the Conservative MP for Moray Douglas Ross sparked further controversy. When asked by a journalist what he would do if he was Prime Minister, he reportedly said his first priority would be “tougher enforcement against Gypsies and Travellers”.

Protesters took their concerns to Holyrood: 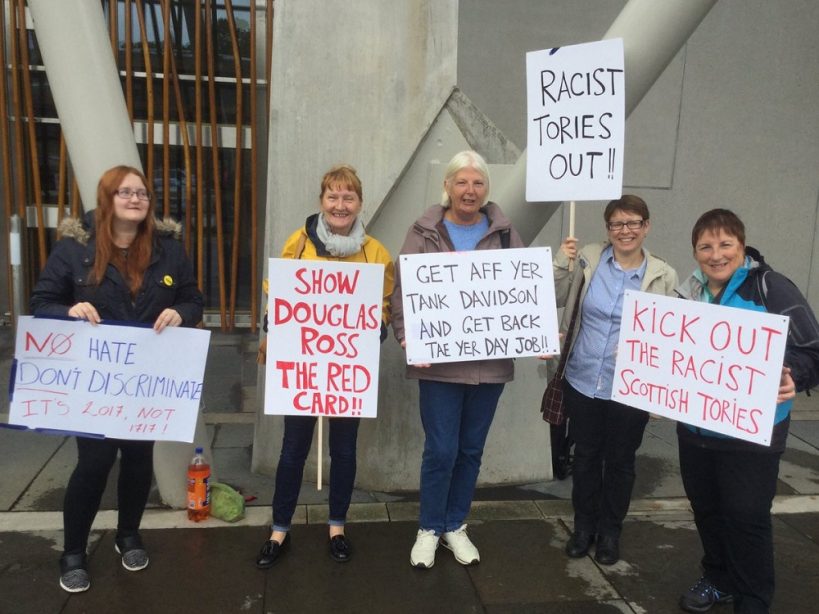 They made their feelings clear about how they’d like Holyrood to be: 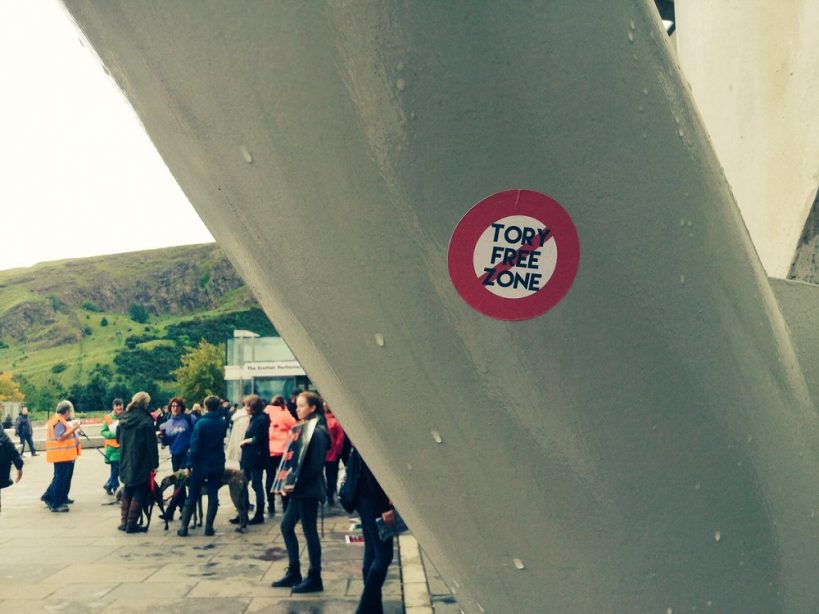 Ali, from campaign group 45 Storm, which organised the protest, told The Canary:

With the latest scandal of Douglas Ross MP making bigoted comments about gypsies, I was angered by the lame journalism from BBC Scotland in following up on Ruth Davidson’s false statements on Good Morning Scotland. I was shocked that in the whole of Scotland there wasn’t any journalist prepared to follow on her inaction on this scandal. I decided to arrange the protest and try to question her myself.

Some of the Scottish media have accused Davidson of going into “hiding” over the issue. CommonSpace, for example, was told that she would not be available for an interview for “a couple of months”. But Davidson did appear on Good Morning Scotland on 1 September, saying that the two Tory councillors, and Ross, were:

in talks with an anti-Semitic charity called Show Racism The Red Card, because they want to be able to change their behaviour.

But Show Racism The Red Card immediately denied having any contact with the Conservative Party on this issue. The charity also clarified that Davidson’s description of it as “anti-Semitic” was “a slip of the tongue”. It “is an anti-racism charity working across all ethnicities, cultures, religions and nationalities.”

Protesters tried to track down Davidson on Thursday. But to no avail. And SNP activist Sarah compared Davidson’s and Ross’ actions to those of Donald Trump:

Ali said that the protest was to allow people to “express their anger at the rampant sectarianism, xenophobia, and racism that Ruth Davidson is allowing to seep into her toxic party”. But she is also critical of the mainstream media’s coverage of Davidson’s inaction on the party’s scandal. She told The Canary:

Ruth Davidson is an ex-BBC journo and with the mainstream media journalists being predominantly Unionist in Scotland, Ruth Davidson is given an easier time, never holding Davidson or the Scottish Tories up to the same scrutiny as the SNP.

The Scottish Conservatives said in a statement:

Having served a suspension, both councillors have been readmitted to the party after offering unreserved apologies for any offence caused. It has been made abundantly clear that behaviour like this will not be tolerated in future.

Davidson is already being tipped as a future leader of the Conservative Party. But her handling of this scandal shows her inability to rein in her own politicians. And it also shows her inability to effectively deal with a crisis, and the media. At the moment, though, with Theresa May currently in a perpetual shambles, these seem like prerequisites to being a Tory Prime Minister.

This article was updated at 11:05 on 25 September to clarify that Ruth Davidson’s description of Show Racism The Red Card as “anti-Semitic” was “a slip of the tongue”.

– Read more from The Canary on Scotland.