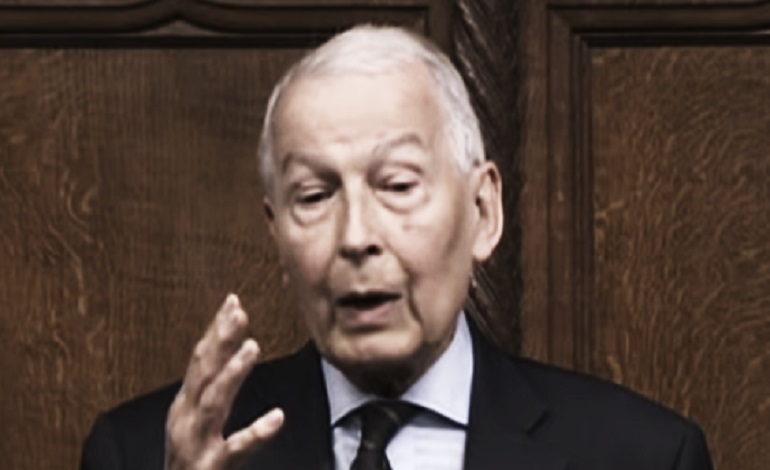 A veteran Labour MP is at the centre of a growing storm over his comments that employers should not have to pay the National Living Wage (NLW) for some “low-productivity” workers who are “incapable of enough output” to warrant the same money as everyone else. But campaign groups have compared his stance to ‘Nazi thinking’, with people saying he should retract his comments or face the sack from his parliamentary role. Because the MP made the comments about disabled people.

Frank Field is the MP for Birkenhead and Chair of the House of Commons Work and Pensions Select Committee. It was in his latter role that he contributed to a report [pdf] on “transforming employment for disabled people and those with health conditions”. The collection of essays for the Learning and Work Institute (L&W) and The Shaw Trust was called “Opportunities for All”. It was a response [pdf p7], in part, to the Department for Work and Pensions (DWP) Green Paper [pdf] called Improving Lives, from October 2016. And it aimed to collect ideas from people with “expertise” [pdf p8] in disability, health and employment.

But Field has sparked controversy for a specific idea he tabled.

One idea that has been mooted is to grant a specific exemption to the [NLW] to those whose disabilities are deemed so severe that they will never be capable of enough output to warrant payment of the minimum wage, but who might nevertheless enjoy significant wellbeing gains from involvement in an appropriate workplace environment. Such workers might be permitted to earn a small amount of money a week with zero or negligible impact on their ESA award.

This section is not taken out of context. Previously in his essay, Field argued [pdf p111] that some disabled people are “further adrift” from employment because of the NLW. This is because, he says [pdf p111], their work has “an economic value below the legal minimum wage”. He says [pdf p111] his idea is to help employers “to take on low-productivity disabled workers”.

But Field’s suggestion is not new. Because in 2014, former Welfare Reform Minister Lord Freud said at a conference that some disabled people were “not worth” the minimum wage. As The Independent reported, Freud was recorded saying:

There is a small… there is a group, and I know exactly who you mean, where actually as you say they’re not worth the full wage, and actually I’m going to go and think about that particular issue, whether there is something we can do nationally, and without distorting the whole thing, which actually if someone wants to work for £2 an hour, and it’s working can we actually…

Freud issued a full apology over his comments. But at the time, the then PM David Cameron distanced himself from Freud’s comments after Ed Miliband intervened. Cameron said they weren’t his views and that:

Of course disabled people should be paid the minimum wage…

The idea that this is about cutting the NLW is absurd. It is about building a properly resourced package, including work buddies, if we are to provide the stepping stones that will enable people living with severe disabilities to achieve a life’s ambition to work. How do we ensure they can fulfil that ambition, in a way which ensures employers meet the sacrosanct requirement to pay the NLW, which is proving incredibly difficult under the present system? Not to have that discussion is a betrayal of disabled people and I am not prepared to do that. We must have the courage to consider ideas like this one, building ways into gainful, meaningful work. Individuals and organisations who claim to represent the views of disabled people should be demanding that politicians discuss ideas like these that could make the dream of work a reality, not trying to silence the debate.

But Linda Burnip from Disabled People Against Cuts (DPAC) believes that Field does not understand why his comments have upset disabled people. She told The Canary:

For anyone in this day and age to hold those views, and especially someone in Frank Field’s position, is abominable. It is exactly the same sort of thinking as the Nazi ‘useless eaters’ rhetoric.

The Nazis’ “useless eaters” rhetoric [pdf] was aimed at disabled people and those with mental health issues. Hitler forced [pdf p2] couples with hereditary conditions to have abortions, and encouraged [pdf p2] people to kill their own disabled relatives. This was because he viewed [pdf p2] disabled people as a “life unworthy of life” and a “burden on the German worker”; essentially not worth as much as non-disabled people.

The right to equal treatment and equality are human rights. Human rights are not privileges. That’s why they are called rights. I suggest Mr Field goes back to the drawing board. His comments are a disgrace and he should now apologise. Furthermore, if the Labour Party wishes to prove that it has truly changed its tune, it will need to demonstrate that the New Labour old guard are no longer calling the shots and put the voices of disabled people first.

The last time we looked, Mr Field was not a spokesperson for disabled people.

Disabled people: living on the edge

Only in August, the Chair of the UN Committee on the Rights of Persons with Disabilities (UNCRPD) Theresia Degener said the UK government had created a “human catastrophe” for disabled people, where society viewed them as “parasites, living on social benefits… and [living on] the taxes of other people”. It is this “parasites” view which Field’s idea seems to play into. But in an unbroadcast BBC interview, Degener also said [13.25] that the government had caused:

People [to be] pushed into work who were not fit for work… It is right to assume that disabled people are capable of working… But… you have to take into account the vulnerability of disabled people, especially if they have psychosocial disabilities or if they are intellectually disabled.

Many disabled people would argue that Degener is incorrect when she describes them as “vulnerable”. But her point still stands. Disabled people do, of course, need barriers removing that stop them from working. But they don’t need to be incentivised. Nor do they need to be forced into work.

And they certainly don’t need MPs like Field skirting a very fine and dangerous line between what he views as ‘courageous’, and what many disabled people would view as the ‘othering’ of their community. His half-baked, hyper-capitalist idea that employers can get away with paying ‘unproductive’ disabled people less merely plays into the hands of those who would see them marginalised and stereotyped even more in society. And if we’re not careful, MPs like Field will lead us further down a very dangerous path. One that we’re halfway along already.

– Write to your MP, asking them to support the UNCRPD findings.