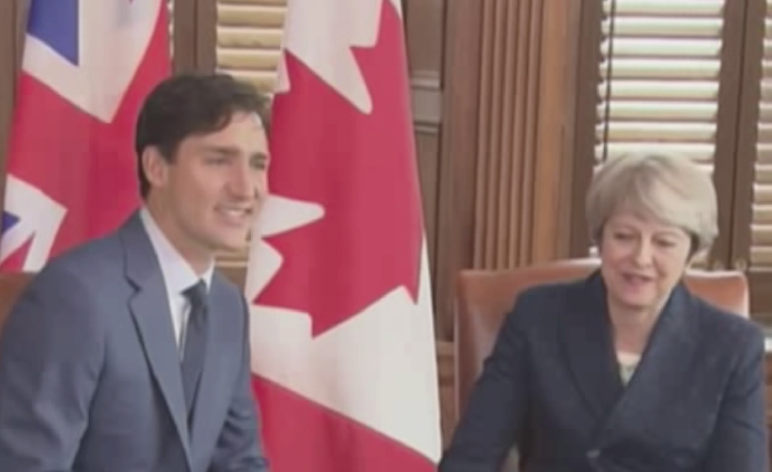 Several pro-Brexit figures have repeatedly accused the UK media of ‘talking down’ the country to undermine negotiations. The criticisms being made are not exclusive to the UK, though. They are also being made around the world. And this is problematic. Because countries we hope to secure trade deals with share the misgivings of many in the UK.

Theresa May travelled to Canada on Monday 18 September, where she met with Prime Minister Justin Trudeau.

Analysis from Canadian news sites gives an interesting insight into how the UK is viewed from abroad. The national Canadian Broadcasting Corporation (CBC) writes:

The British call it the ‘copy and paste’ strategy: the fond hope their country will be able to duplicate the trade agreements it enjoys as a member of the European Union once it leaves the group in 2019.

It’s a shrunken ambition for those who campaigned for Brexit.

After all, breaking free of the EU was supposed to restore a golden age of free trade as countries rushed to renegotiate deals with a Britain free of Eurocratic interference.

The best now on offer, it seems, is to try to hang on to the deals Britain already has under the EU.

What we are trying to “hang on to” is the Canadian-EU Trade Agreement (CETA). It’s estimated that CETA is worth $3.5bn a year to the UK. But the UK ceases to benefit from it as soon as we leave the EU in March 2019. And as Canada’s The Globe and Mail points out:

Britain and Canada will still have to create their own free trade agreement, which took the Brussels and Ottawa five years to negotiate.

(Note: CETA has sparked significant criticism itself, but that’s a debate for another day.)

Both May and Trudeau have spoken of a “seamless” transition. Work groups have been set up with Canada and several other countries. But the CBC points out that the EU forbids member states from engaging in separate trade negotiations. It writes:

So, it remains to be seen how much work those working groups will really do.

If Canada and Britain were to sign a deal the day after Brexit became official, it might be hard for Canada to argue it hadn’t flouted the EU rules.

The infighting within the Tory government is also well known to our neighbours. As is the progression of talks with the EU. As the CBC notes:

Britain’s Brexit negotiators have been consistently outplayed by their EU counterparts, who feel that both time and the EU’s rules are on their side.

This led the CBC to observe:

as Britain turns to Canada and other nations to try to shore up its trade networks, its negotiators face a similar problem: everyone knows they are desperate for a deal…

And this Thursday, Canada will gain precisely what the UK is now on course to lose: free trade with the European Union.

It’s useful to know how the world outside Europe sees our situation. Because in many ways, the Brexit negotiations are just the beginning. The global trade talks that come after could take even longer. And if we want to be a global nation, the UK needs to conduct itself in a fashion that inspires confidence. A fashion that is at odds with the Tories’ infighting, indecision, and incompetence.

– Catch up with the latest on Brexit. And learn more about the dark side of CETA here and here.

– You can also support The Canary so we can continue to bring you more of the news that matters.