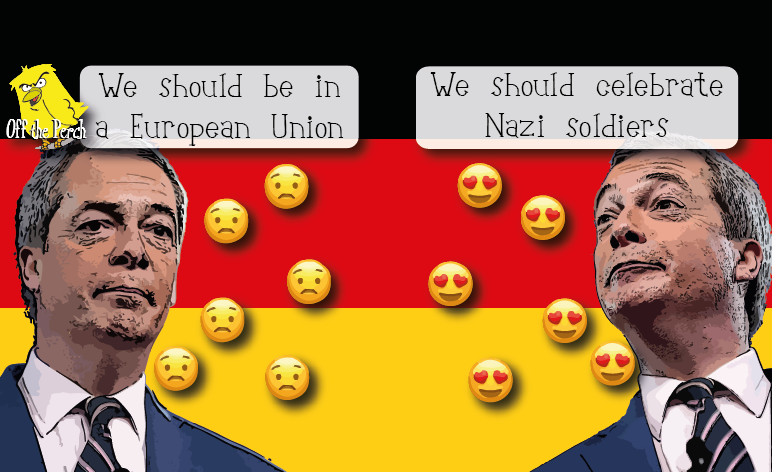 The far-right Alternative for Germany (AfD) party has become the third largest entity in German politics. And certain British ‘patriots’ are celebrating this. Despite the fact that one of the party’s co-founders said:

we have the right to be proud of the achievements of the German soldiers in two world wars.

Which, for clarity’s sake, means celebrating the accomplishments of:

Nigel Farage is one of the UK’s top ‘patriots’ who has backed the AfD. Off The Perch caught up with another – one Thaddeus Facepalm – to find out more:

OTP: So Thaddeus, you seem pleased the AfD has done well. Do you not feel like that’s a slap in the face to our war dead?

TF: My granddad didn’t die in World War 2 to let a load of Muslims take over!

OTP: No, of course not. Your granddad died in World War 2 to stop the Nazis taking over.

TF: We’ve got to stop them coming over here for the sake of our grandparents!

OTP: Sorry, at what point did I lose you? Do you need me to draw a diagram? I’m saying that the people you’re celebrating are in turn celebrating the Nazis. The Nazis who killed your granddad.

TF: Oh, sorry – is it not politically correct to do that?

OTP: I’m not sure, sorry. Let me just look up ‘stupidity’ in the PC handbook. Ah, here we go – it says you should avoid it.

TF: Typical leftists! You’re out of touch with what real patriots want!

But, just to be clear, we're still not allowed to call Ukip Nazis, right? pic.twitter.com/ozLh3dM1Vd

Who do you think you are kidding, Mr Hitler?

Look, we’re not saying you can’t call yourself a ‘patriot’ and talk about how much better the war generation was.

And we’re not saying you can’t lick the boots of a bunch of Nazi boot-lickers.

We’re just saying that it’s one or the fucking other.